From safe rooms in basements to solar panels on rooftops, local church actions on immigration and climate change were subjects of repeated coverage in United Church News and Keeping You Posted last year – along with national policy work and demonstrations on those two issues.

Below are 10 major United Church of Christ topics of 2019, from the news department in the Office of Philanthropy, Technology, Identity and Communication. While it is not a comprehensive list of newsworthy issues or UCC ministries, it nonetheless reflects what often appeared in the news section at ucc.org and in the weekly e-news digest, KYP.

Some issues overlap. For example, climate breakdown and disaster response were surely related. Immigration and refugee work was sometimes also LGBTQ work. General Synod, a topic unto itself, acted on issues in several of these categories. And Number 10 – promoting love over hate, unity over division, welcome over rejection – summarizes much that is being done in Jesus’ name in many settings of the UCC.

Here, then, are 10 issues that were frequently in the news in 2109 – marked with relevant hashtags from the UCC’s 3 Great Loves, and including links to a sampling of stories. 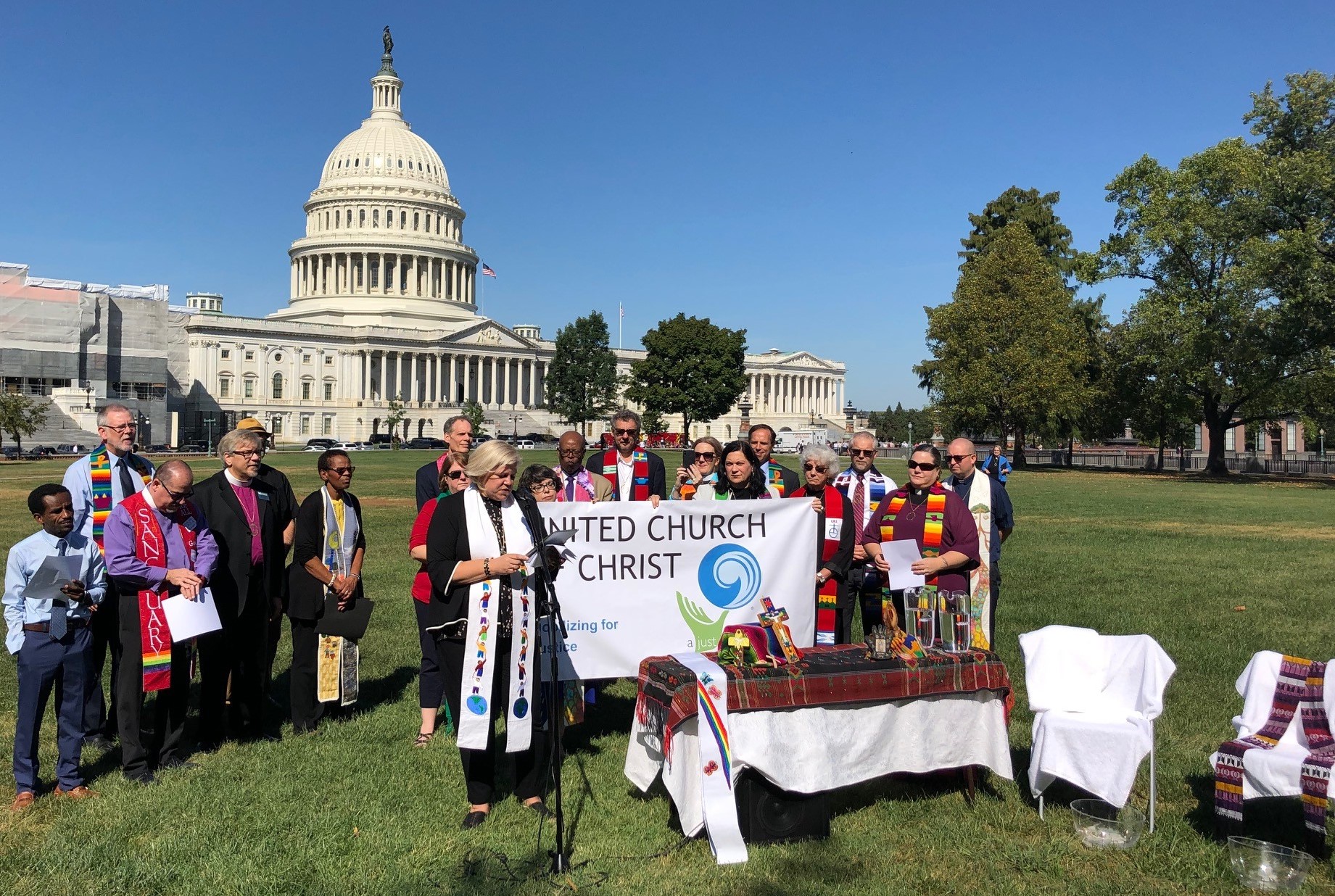 The year started with UCC leaders speaking out against President Donald Trump’s January push for a “steel barrier” at the U.S. southern border, and with congregations aiding federal workers furloughed by a related government shutdown … By the hundreds, General Synod participants joined local citizens in a June 24 protest outside U.S. Immigration and Customs Enforcement offices in Milwaukee … Nationwide “Lights for Liberty” demonstrations July 12 – against border “concentration camps” and the separation of families and children – drew broad UCC participation … Bearing letters from UCC people around the country, Conference ministers converged on Capitol Hill (above) in September to pray, wash immigrants’ feet and visit members of Congress, calling for humane immigration policies … UCC and other religious leaders took to the steps of the U.S. Capitol Oct. 15 to oppose a proposal to cap refugee resettlement at a historic low … All year long, local churches provided sanctuary, legal help and basic support for daily life to all manner of immigrants, ranging from Central African asylum seekers in Maine, to a Ugandan refugee in Ohio, to a Honduran father in Missouri, to people needing water in southern deserts, to a transgender Nicaraguan and a gay Muslim in California – to name just a few. 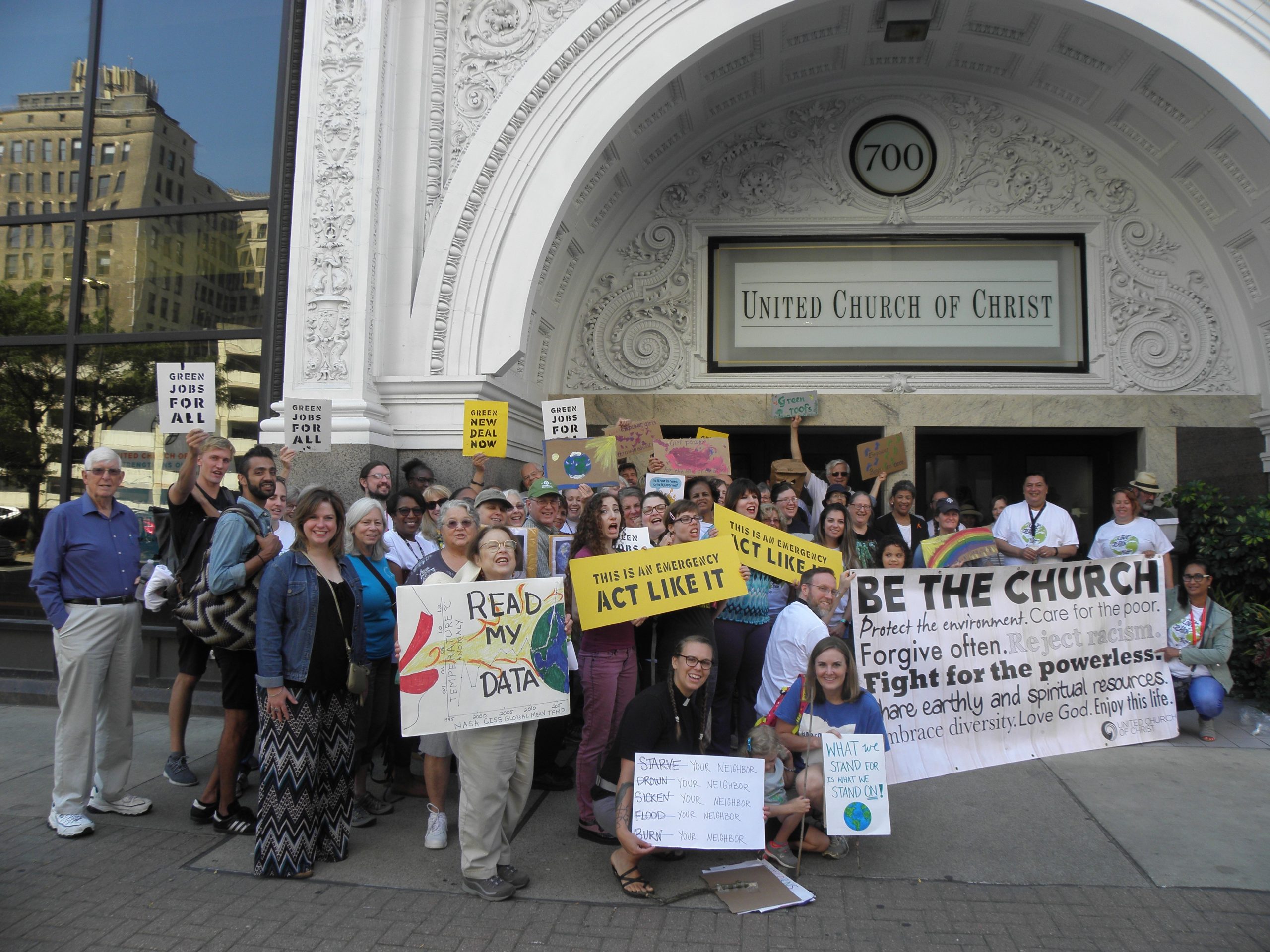 Advocacy efforts ranged from January clergy visits to U.S. senators to General Synod’s June endorsement of the “Green New Deal”, making the UCC the first U.S. Christian denomination to do so via a national deliberative body. Noted climate scientists said it mattered … Youth materials co-produced by the UCC were embraced by the World Council of Churches as part of its climate strategy … Youth-led climate strikes around the country drew support from UCC demonstrators (such as those in Cleveland, pictured above) Sept. 20 … UCC leaders took part in “Week of Climate Action” activities in New York City and Washington, D.C., following the United Nations’ Sept. 23 Climate Action Summit  … UCC speakers were at the mics during one of actress Jane Fonda’s “Fire Drill Fridays” in D.C. Dec. 6 … UCC buildings, from a Conference office in Wisconsin to local churches in many regions, continued to go solar to save energy costs and reduce carbon footprints.