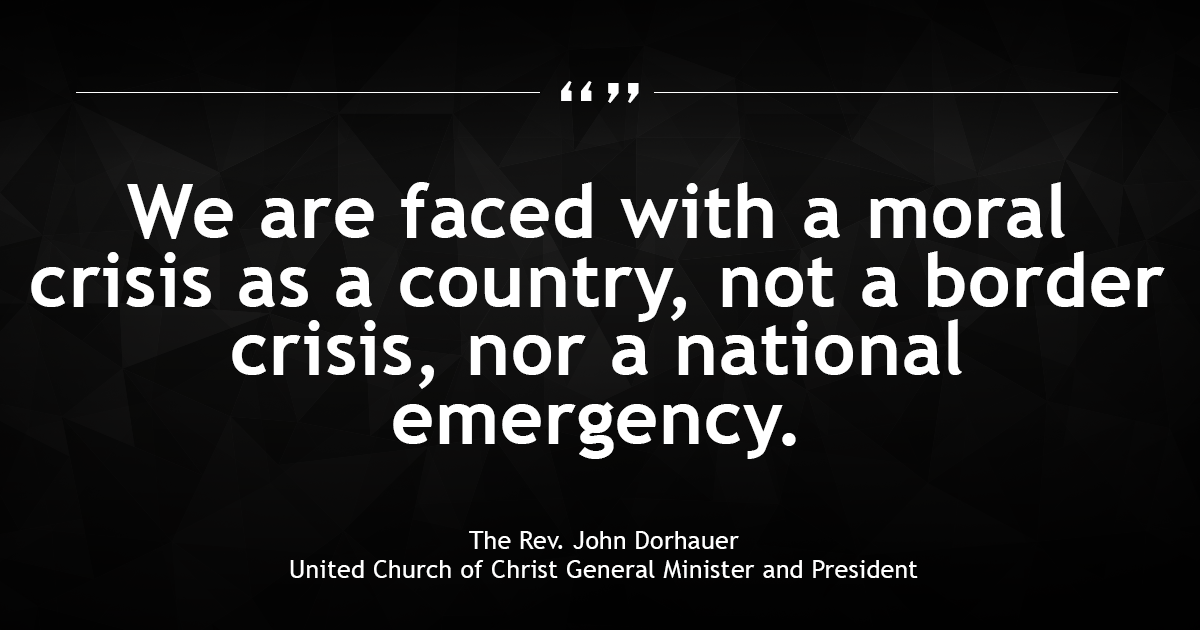 The national leaders of the United Church of Christ are speaking out in response to President Trump's prime time address Tuesday night, noting, "We are faced with a moral crisis as a country, not a border crisis, nor a national emergency."

Trump, appealing the American people to spend billions on border security to end "a growing humanitarian crisis, a crisis of the heart, a crisis of the soul," urged Democrats to continue negotiations to bring an end to the partial federal government shutdown over border wall funding, which is now in its third week.

Rejecting the President's argument for a "steel barrier" on the United States southern border UCC executives underscored the denomination's long history of extravagant welcome, welcoming refugees, asylees and immigrants no matter what their documentation status because we believe all people are equal in the eyes of God.

"As people of faith, we believe in the God of abundance and not the myth of scarcity and xenophobia," said the Rev. John C. Dorhauer, United Church of Christ general minister and president. "Manufactured fear has always been a way to justify dehumanization of marginalized communities. We are faced with a moral crisis as a country, not a border crisis, nor a national emergency."

"This President's government shutdown is penalizing millions of Americans who are missing critical services," Dorhauer continued. "Over 800,000 federal employees won't be paid on Friday. Shutdowns and emergency declarations are not the way to govern a democratic nation. We cannot betray our core values as a country and cast aside the most vulnerable. There is agreement across the political spectrum that our immigration system needs fixing, but a border wall is not the answer."

"President Trump is already building his wall," said the Rev. Traci Blackmon, associate general minister, Justice & Local Church Ministries. "In spite of bipartisan support for effective and humane border security, the president is building a wall between political parties that should never represent partisanship at the expense of people. For 800,000 federal employees and their families he is building a wall between financial stability and scarcity by shutting down government until he can have his way. And should President Trump misuse executive power, to usurp legislative opposition, and declare a national emergency where he knows none exists, he will effectively build a wall between the executive branch of government and what democracy is intended to be. We call upon the moral conscious of our nation to not let this be so. "

"The UCC has a long history of supporting disaster ministries and making sure refugees are resettled. We see real crisis all the time. There is no national security emergency at the border. This is a manufactured crisis, and the administration is now moving forward with an undemocratic power grab because Congress and the public refuse to go along with these immoral policies," said the Rev. Jim Moos, associate general minister, Global Engagement & Operations, co-executive, Global Ministries. "Now we must join together across this country with a unified moral voice for compassionate immigration policies that respect the dignity of all people."