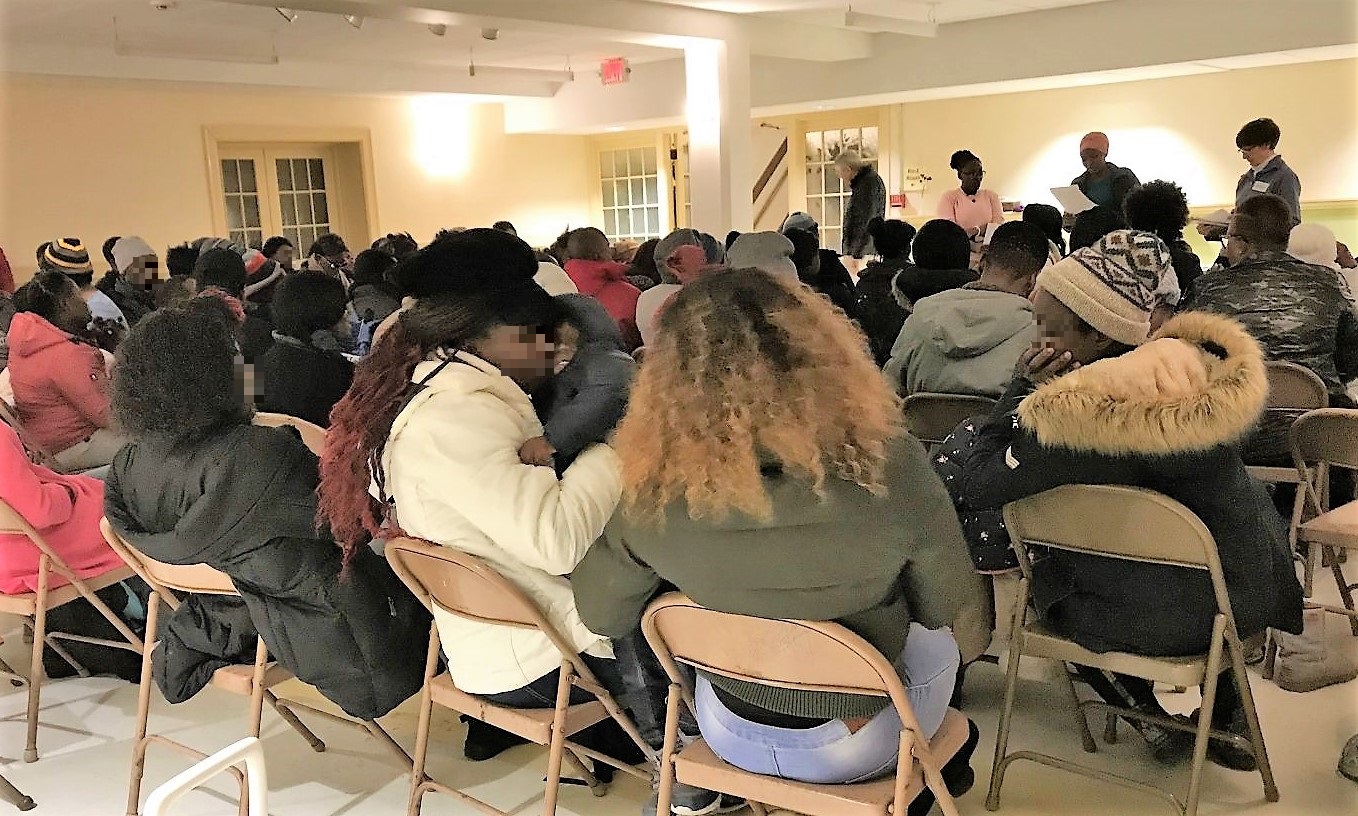 Africans fleeing violence and seeking asylum in the United States are arriving in Maine in remarkable numbers and receiving support from United Church of Christ congregations – not only in Portland, where nearly all the newcomers are, but from around the state as well.

UCC people in this aging and overwhelmingly white state say there's nothing remarkable in their offers of help. Whether it's bedrooms in a parsonage or money raised for legal assistance, it's how they do church, they say.

National and local media have documented how Portland is a magnet for people fleeing persecution in Angola and the Democratic Republic of Congo, partly because of the city's special assistance program. Local churches and nonprofits have long been pitching in to welcome the asylum seekers. A year ago, Portland's Willison-Immanuel United Church received a grant from the UCC national Humanitarian and Development Ministries to support the congregation's work to provide asylum seekers with food, diapers, phone cards, bus passes and other kinds of help.

The urgency increased this summer, with the arrival in June of nearly 300 additional African asylum seekers. Portland converted its city basketball arena into a temporary shelter until Aug. 7 and is trying to cope with finding services for the guests and the strain on its Community Support Fund, which supports newcomers even before they have applied for asylum. 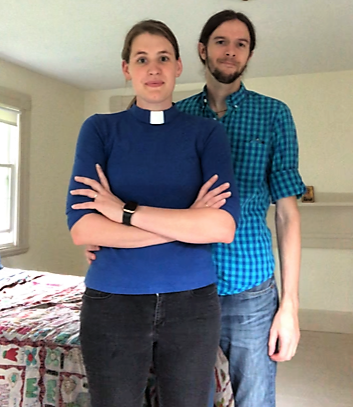 At least one family will soon find a home at Falmouth Congregational Church, UCC, a 15-minute drive from Portland. The Rev. Amelia Edson and her husband, Jake, have offered two bedrooms in what she describes as their "big farmhouse parsonage." A family is due in late July via the ecumenical Compassionate Housing Initiative in nearby Yarmouth, and the couple will soon find out who it will be. "We can host, probably, a relatively large family, depending on the age of the kids, for an indefinite amount of time," Edson said.

Rides to medical and legal appointments, English-languages classes and all kinds of resources will be critical, she said. Those are something the church knows how to give. "We are a congregation that serves," Edson said. "We serve each other. Folks in our congregation give each other rides, take each other meals, visit each other in the hospital. It turns out that that bread-and-butter church-ness, that ability to care for one another, that ability to step up and answer a call is what is needed in the process of welcoming these new neighbors." 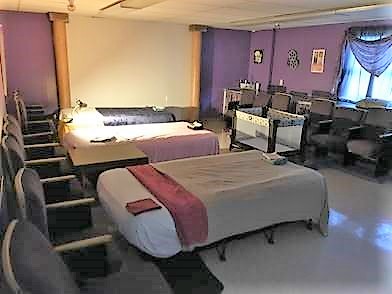 She said the church's experience with housing homeless families in its cozy basement will serve it well in welcoming its own next set of guests – three families due at the church sometime after July 28, in addition to the parsonage guests. For several years, Falmouth Congregational has taken turns housing the homeless through the ecumenical Greater Portland Family Promise network. Now there's an 85-percent chance they will be asylum seekers from Africa. "Working with Family Promise has given people the stories to view these people as neighbors," Edson said. "Unhoused folks, kids in that program, have sung in our church, played with our children, joined in card games. That does change things – thinking about real people, real stories, real connection."

Originally from Freeport, Edson has served in various ministries around the country and just arrived this year as pastor in Falmouth. The congregation's generosity "doesn’t surprise me in the least," she said. "It's a confirmation of the things I saw growing up here. Mainers are generous folks." 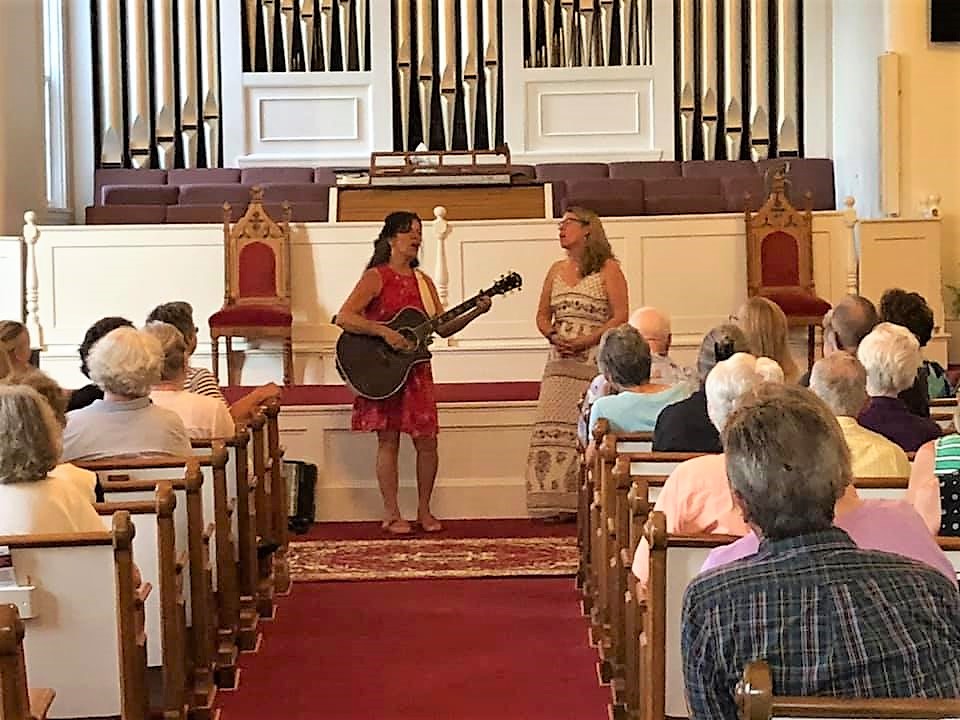 The legal needs of asylum seekers caught the eye of the Rev. Sarah Foulger, pastor of the Congregational Church of Boothbay Harbor. "If you have no legal representation, your chances of being granted asylum are one in 10," she said. "Even with legal assistance, your chances are only something like 65 percent, but that's a big difference. There are no court-appointed lawyers for asylum seekers. You have to have legal assistance."

Foulger organized an evening benefit concert at the church on Sunday, July 14, featuring five local folk musicians, all "very eager to do something to help." The concert drew some 200 church members, fans of the artists and members of the public and raised $5,000 in donations that night. Checks were still trickling in the following week. The money is going to Maine's Immigrant Legal Advocacy Project, providing pro bono help to asylum seekers and other immigrants. The church – situated more than an hour northeast of Portland – had already donated $2,000 immediately upon news of the June arrivals.

"This is a very responsive congregation," Foulger said. "They have great concern for what is happening. If there's a need, they respond. They are very mission-minded, very generous."

In mid-July, more than 20 people who had been housed in Portland's arena shelter moved to Brunswick, about a half-hour's drive to the northeast. With its senior minister away on sabbatical, First Parish Church, the local UCC congregation, was not immediately able to take a lead in responding.

That's why First Parish Office Administrator Jessie Crabtree has been grateful to the UCC's Maine Conference, based in Augusta, for setting up a fund to help asylum seekers. Many members of First Parish are interested in helping, and the Conference fund is one reliable UCC response she can refer them to. "It's a perfect example of a way the Conference can help local churches respond when they aren't in a position or don't have the resources to help on their own," Crabtree said.

"We are in the process of finding out where it can best be used," said the Rev. Deborah Blood, Conference Minister, describing the Asylum Seekers Fund, created this summer. "As is often true in the UCC, we want to be supportive of longer-term needs, to fill needs that otherwise would go unmet. These people will be here a long time, and it's highly likely that more people will be coming to Portland. There's this immense global shift of population going on and this is our little piece of it." As of July 12, the fund had exceeded $11,000, with gifts from churches throughout Maine, Blood said.

The Conference has received $5,000 for asylum-seeker work from Humanitarian and Development Ministries, thanks to One Great Hour of Sharing gifts from churches and members throughout the UCC. Another $5,000 was also sent again this year to Williston-Immanuel in Portland, where work with asylum seekers continues to evolve.

Alison Barker, who staffs the downtown church's weekly Community Assistance program, said she is grateful for that grant, which supplements the congregation's own significant support. Williston-Immanuel devotes 10 percent of its annual budget to the program, with additional special funding from its Outreach Committee budget, from its monthly Family Fund offering, through Barker's staff time, and by picking up overhead, such as custodial services and printing.

"In May we reached capacity in the room we were using," Barker said. "We were having 200 on a Thursday morning. Most of them wanted cell phone access. It became a difficult situation because we were using a lottery system." People who drew blue poker chips – only about 25 of them – got the coveted phone vouchers; those who drew red were limited to food and diapers.

So the program is now first-come, first-served, admitting 100 people each Thursday based on who lines up first. Lines start forming as early as 6:30 a.m. for doors that open at 8 and assistance the starts at 10. Services that used to be scattered throughout three floors of the church – intake and information tables, food pantry, diaper pantry, phone vouchers, refreshments, etc. – are now centralized in the basement. A dozen or more translators are usually present, along with about 10 volunteers. Food and household items in high demand include beans, rice, oil, detergent and sanitary pads.

Barker learned that all Community Assistance guests typically speak the African language Lingala, so announcements are now made in that language instead of in French and Portuguese. That, along with having everyone in one room, has transformed the feel of the program. "It's far more of a village atmosphere than the benevolent white person standing up at the front of the room giving out goodies," Barker said. "It's a gathering place. It gives folks 'from away' – that’s how Mainers say it, and it doesn't matter if you're from Massachusetts or Africa – it gives them a chance to gather, exchange information and network. I believe that social aspect is important."

The asylum seekers seem to appreciate the help. When Barker invited them to write notes to thank supporters of the program, including those in the wider church, dozens of guests responded. "My family and I are deeply grateful," one wrote in Portuguese. "It is something unusual to see there are people like you who have a pure heart as a human should be. I thank you for all. May God bless you."