On immigration visit to Congress, UCC leaders to carry letters from concerned members

United Church of Christ leaders will wash the feet of immigrants and carry hundreds of letters from local church members asking for humane U.S. immigration policies when they visit Congress this Wednesday, Sept. 25, in Washington, D.C.

Twenty-two of the UCC's 36 Conference Ministers will fan out across Capitol Hill after holding an 11 a.m. news conference, where they will ceremonially wash the feet of a refugee, an asylum seeker and a "dreamer" (a beneficiary of Deferred Action for Children Arrivals). Then they will meet with legislators and ask them to cease funding for detention, deportation, and border militarization. 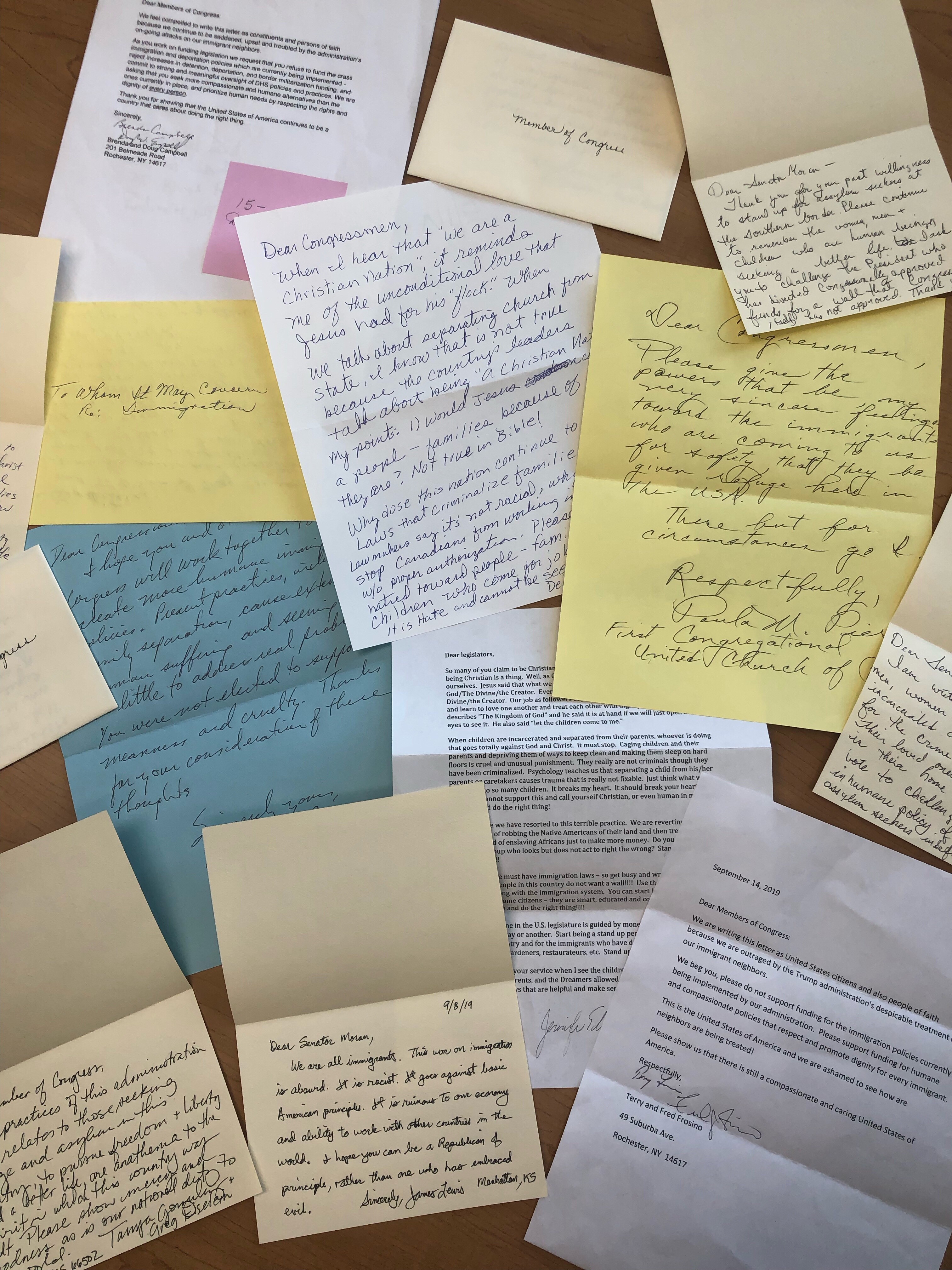 And they will hand out letters to U.S. senators and representatives. They collected some of them back home. Others arrived by mail at the UCC advocacy office in Washington, D.C., sent by the members themselves.

Colonial member Diane Kuhn, 87, was part of a three-person team that headed up the effort, collecting most of them Sept. 8 after worship at a table and a church lunch. To generate a large impact in a short time, they had hundreds of copies of a common letter available for interested people to sign, expressing concerns to Kansas' congressional delegates about current immigration policies and practices. "I'm a very strong believer in citizen participation in the democratic system, and a strong believer that the church should have a voice," Kuhn said. "You just keep at it. You don't win every time, but eventually you win."

David R. Cook of Menomonie Falls, Wis., identified himself "as a 90-year-old white citizen and person of Christian faith." He asked Congress to oppose the current administration's efforts to "illegally block or deport immigrants seeking asylum," calling such policies "immoral and even inhumane" and "a long-term economic danger to our nation." "Legal immigration has been a significant aspect of our economy for decades," Cook wrote. "A counter-force [to current policies] from Congress is crucial to America's future."

"I am continually saddened and troubled by the ongoing attacks on our immigrant neighbors being carried out by the current administration," wrote John Maddox of Hoover, Ala., who chairs the Immigrant Justice Committee at Beloved Community Church, UCC, in Birmingham. He addressed his letter to Sen. Doug Jones. "As you work on funding legislation, I ask that you no longer fund the immoral immigration and detention policies being implemented now and instead invest in programs that uplift family unity, address the root causes of forced migration, and prioritize human needs by respecting the rights and dignity of every person."

Another member of Beloved Community, C. Ed Boutwell, thanked Jones for his work and expressed concern about detainees held by Immigration and Customs Enforcement at the Etowah County Jail in Gadsden, Ala. "We are aware that you are in a tough situation in Washington," Boutwell wrote. "We are in a difficult situation here. There is a jail in Etowah County that has a group of immigrants that need help! Is there any legal way we can help them be released? As a Christian I cannot let this abuse go on. Can you help them?"

In addition to advocacy letters, the UCC D.C. office has also collected testimonials from congregations around the country about how immigration policies have motivated and affected their ministries. You can read them here.

One example comes from the Rev. David Kaden, pastor of First Congregational UCC, Ithaca, N.Y, which voted May 5 to become a sanctuary church: "We have been fundraising to upgrade our security system and to install a bathroom and small apartment in our youth room. We're halfway toward our goal … Without a doubt, the current immigration crisis and the Administration's jaw-dropping cruelty have spurred us to action. But we also have poured hundreds of thousands of dollars into our building after a capital campaign; it just seems fitting to now use this facility to help someone in need. It's our way to love our neighbor, and also to make a public statement about what matters most to us as a faith community. It's our way to 'Be the church.'”

"I know from many years of experience meeting with congressional staff on Capitol Hill that members of Congress pay attention to what their constituents are saying," said Sandy Sorensen, director of the UCC Washington, D.C., office. "It is so heartening to read through the hundreds of heartfelt, handwritten letters that have been sent from around the country to accompany the witness of the conference ministers as they advocate for a more humane immigration system. These letters remind us that speaking from the heart, speaking from our faith, and speaking right from where we are truly can be a way of reaching decision-makers. It is a way that everyone can make a difference."