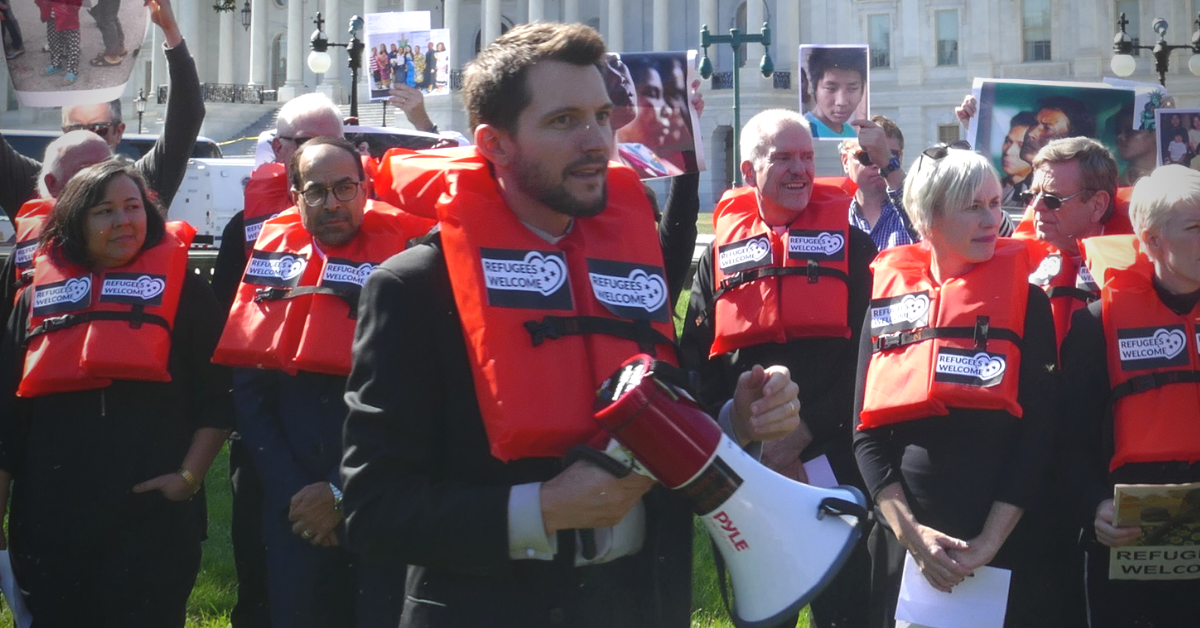 Wearing black to show solidarity with refugees, hundreds showed up outside the United States Capitol on Tuesday, Oct. 15, to protest the historically low cap on resettlement proposed for 2020, one that many believe could virtually end refugee resettlement in the U.S. More than a dozen people were taken into custody by Capitol Police.

"Today 18 of us were arrested on the steps of Capitol in the first civil disobedience in history to defend the U.S. refugee resettlement program," said the Rev. Noel Andersen, coordinator of the UCC Collaborative on Immigration. "We wanted to call attention to decimating cuts to the program and to protest Secretary Pompeo as he meets with Congress with the intention of setting the lowest refugee admissions number in history," he said, referring to U.S. Secretary of State Mike Pompeo.

Pompeo is seeking support for the administration's plans to set the U.S. refugee resettlement — an 85% cut since 2017. 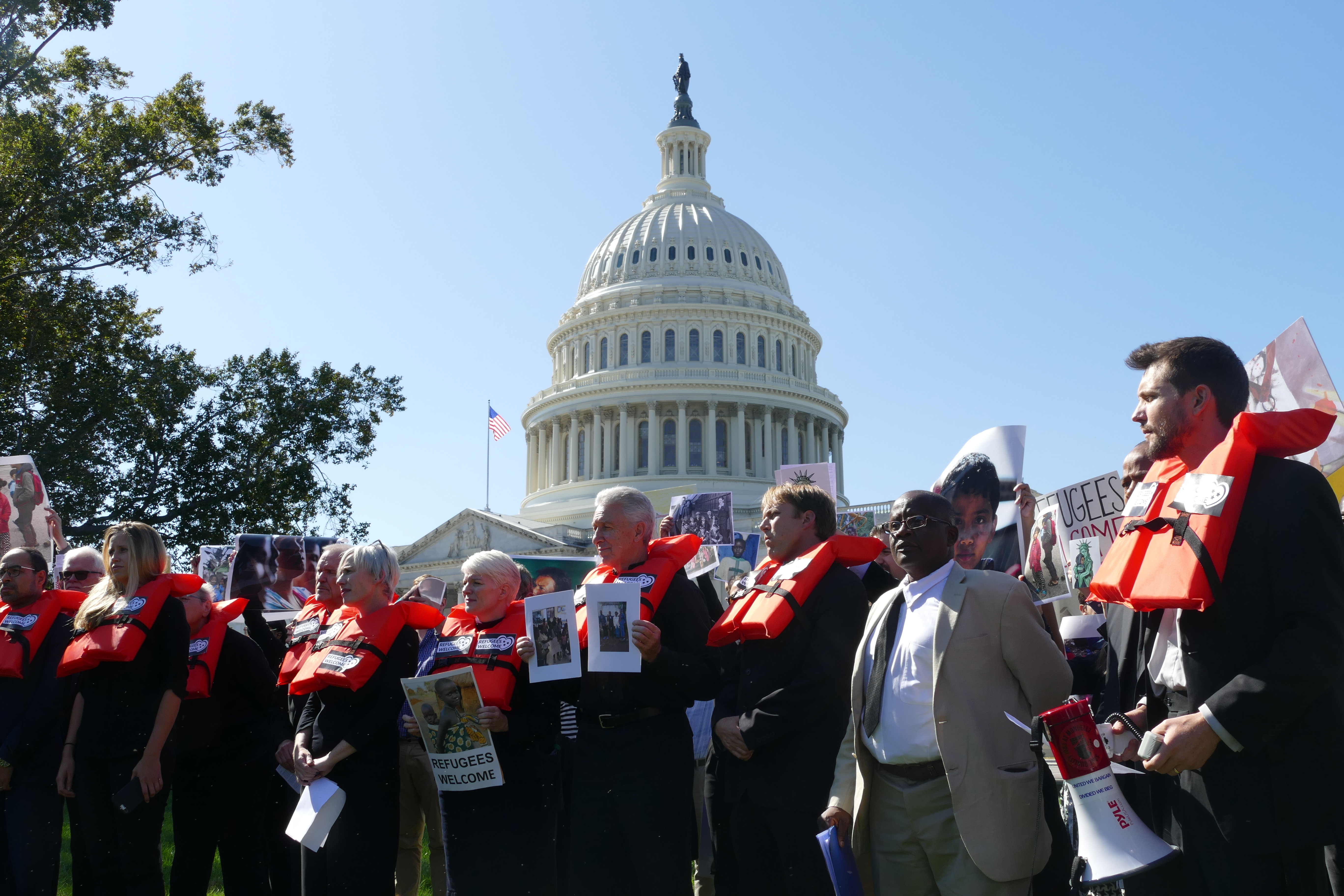 In response to this assault on the program, the 18 leaders of prominent faith and human rights organizations and a former State Department official marched to the steps of the Capitol wearing life vests symbolizing what they see as a life-saving program. Ninety-five protesters accompanied them, carrying photographs of refugees, to note the historic average refugee cap of 95,000.

"The program once had strong bipartisan support, since policymakers on both sides of the aisle understood that by resettling refugees, the United States serves as a moral leader and annually renews a promise on which our country was founded," said Anne C. Richard, Former Assistant Secretary of State for Population, Refugees, and Migration, who was also arrested. "Resettlement is essential as globally more than 70 million people are displaced, including nearly 26 million refugees. By taking in some refugees, the U.S. can encourage other countries to keep their doors open and allow refugees to work and refugee children to attend school. That's key to mitigating conflict, restoring dignity to those who've fled and ensuring a future for millions of young people." 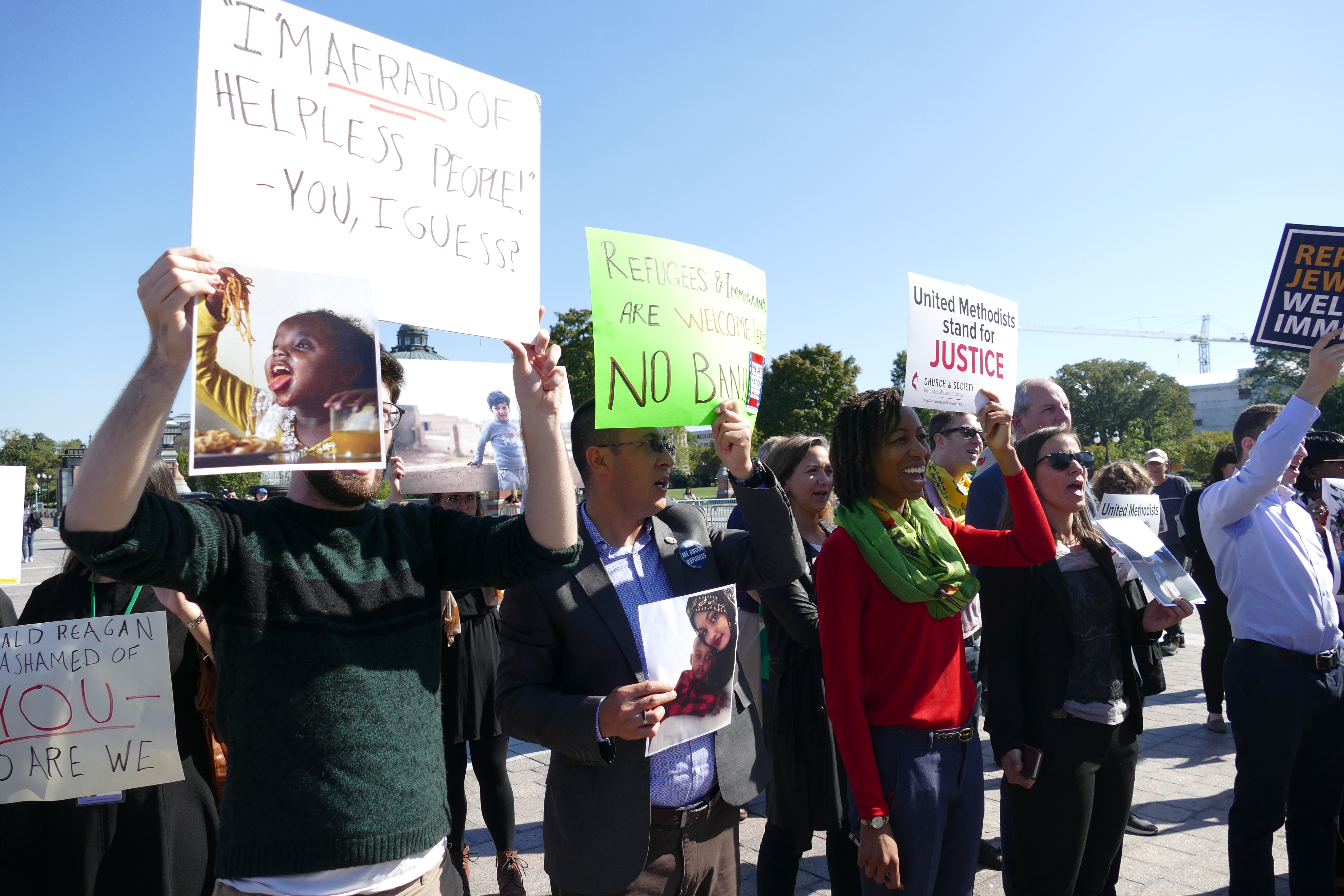 Since the passage of the Refugee Act of 1980, the United States has set an average admissions goal of 95,000 refugees annually. Since the beginning of the Trump administration, refugee admissions have been slashed, causing separation of refugee families and damage to the organizations and infrastructure which welcome and support new arrivals.

The President sets the refugee number, in consultation with Congress. According to the State Department's Refugee Processing Center, the number of refugees resettling in this country has consistently fallen, from a high of more than 207,000 in 1980 under President Ronald Reagan. In 2016, under President Barack Obama, 85,000 were admitted. That was cut almost in half under President Trump – to 45,000 permitted in 2018 – and capped at 30,000 in the fiscal year that ended Sept. 30, 2019.

Before they were taken into custody, human rights leaders had something to say about that. 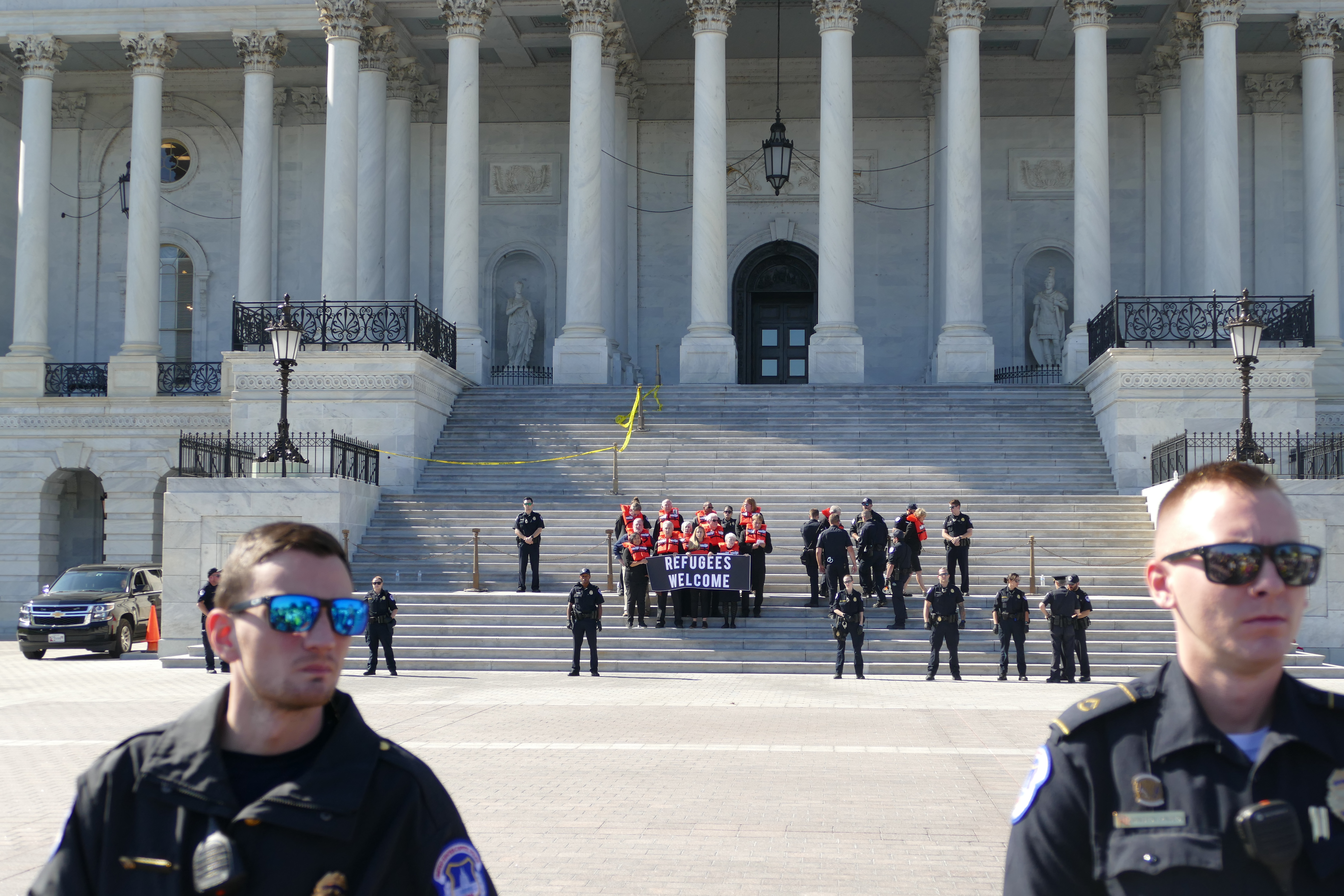 "Today we are standing up to hostility and fear and standing with refugees to call for dignity, equality and fairness," said Margaret Huang, executive director of Amnesty International USA. "It's well past the time for the President to stop abusing his power to demonize people seeking safety and for this country to welcome refugees once again."

"Risking handcuffs pales in comparison to what refugees risk every day to live simple lives in peace and freedom. As a representative of the faith community, I could not in good conscience sit idly by as Secretary Pompeo came to Capitol Hill to get a rubber stamp on his woefully inadequate and cruel proposal," said the Rev. John L. McCullough, president and CEO of Church World Service. "Men and women across the nation have shown themselves willing to open their hearts and their communities to the world's most vulnerable. The secretary should heed their calls for compassion, not Trump's basest fears."

Church World Service, the UCC and other advocates are calling on Congress to support the GRACE Act (S.1088 and H.R.2146), which would set the minimum refugee admissions goal at 95,000 and restore the resettlement program to historic norms.

As Andersen said, "We will continue to fight to protect and restore refugee resettlement, a critical lifesaving program for so many."