A refugee mother resettled in Columbus welcomes her children home 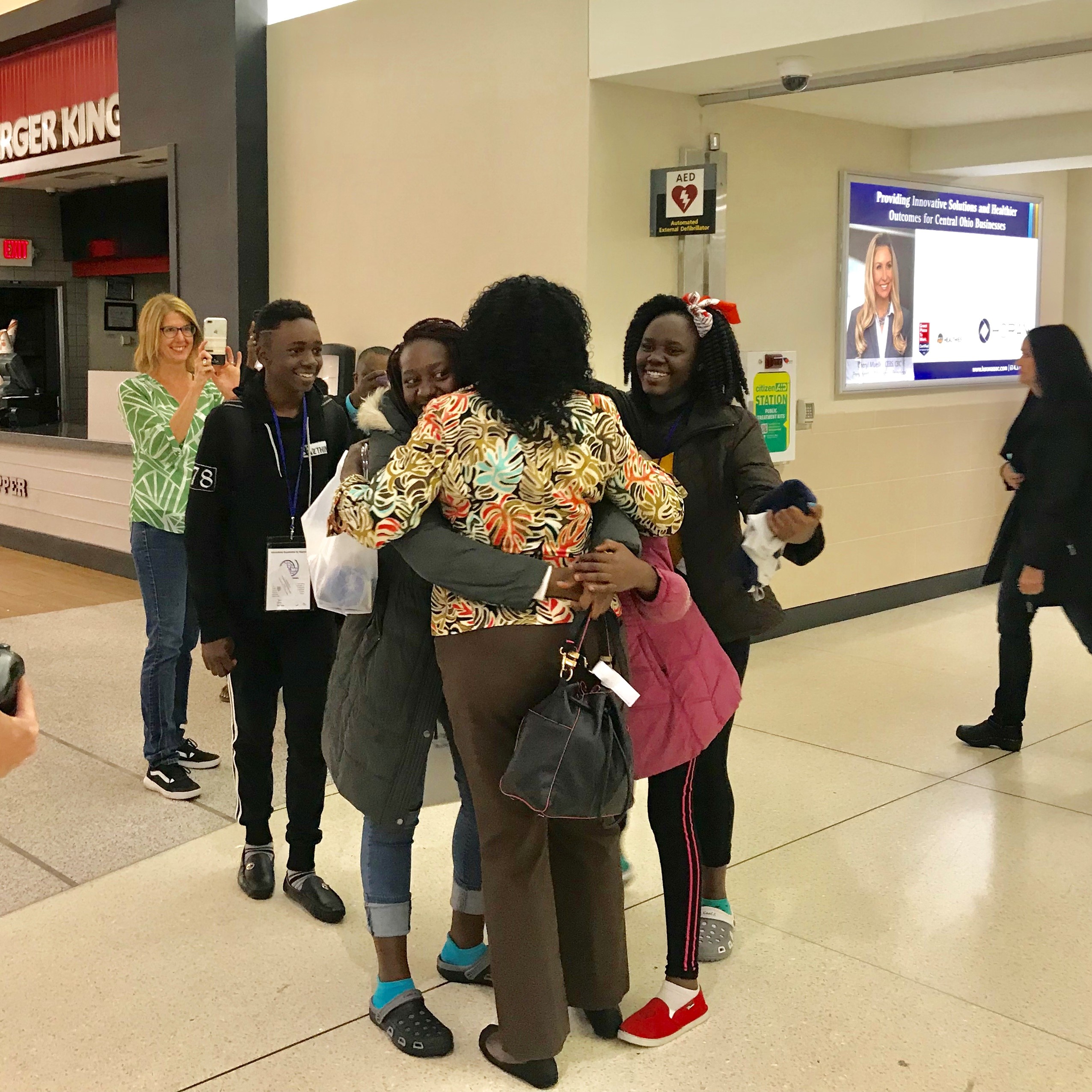 A refugee from Uganda has reunited with her four children this summer after a separation of more than five years — thanks to her dogged determination, constant advocacy and continued accompaniment of her church family.

Deborah Jane Baliraine, joined by allies from First Community Church (FCC) United Church of Christ and Community Refugee Immigration Services (CRIS), both in Columbus, Ohio, welcomed her son and three daughters to their new home in the United States in late June.

"The day we welcomed Deborah's kids to Columbus was one of my best days in ministry, that's for sure," said the Rev. Kate Shaner, FCC minister of mission. "They are so cute. They kept saying, 'Thank you for loving our mom. Thank you for taking care of our mom.'"

Baliraine came to the United States alone in January 2016 to escape horrific circumstances in Africa. Since then her primary focus has been to find a way to bring Carol, 21, Cynthia, 15, Cuthbert, 13, and Claudia, 11, to Ohio.

"We have been separated since Jan. 19, 2014," Baliraine said. "This is the fateful day that I was attacked in my home. It changed my life completely."

Baliraine was a successful business owner in Kampala, Uganda, when she was doused with acid as punishment for speaking out about the plight of women in her rural community. Disfigured and fearing for her life, she fled to Nairobi, Kenya, and was able to secure a spot on a list of refugees to be resettled in the U.S. When she landed in Columbus, she found CRIS and, in May of last year, First Community Church. 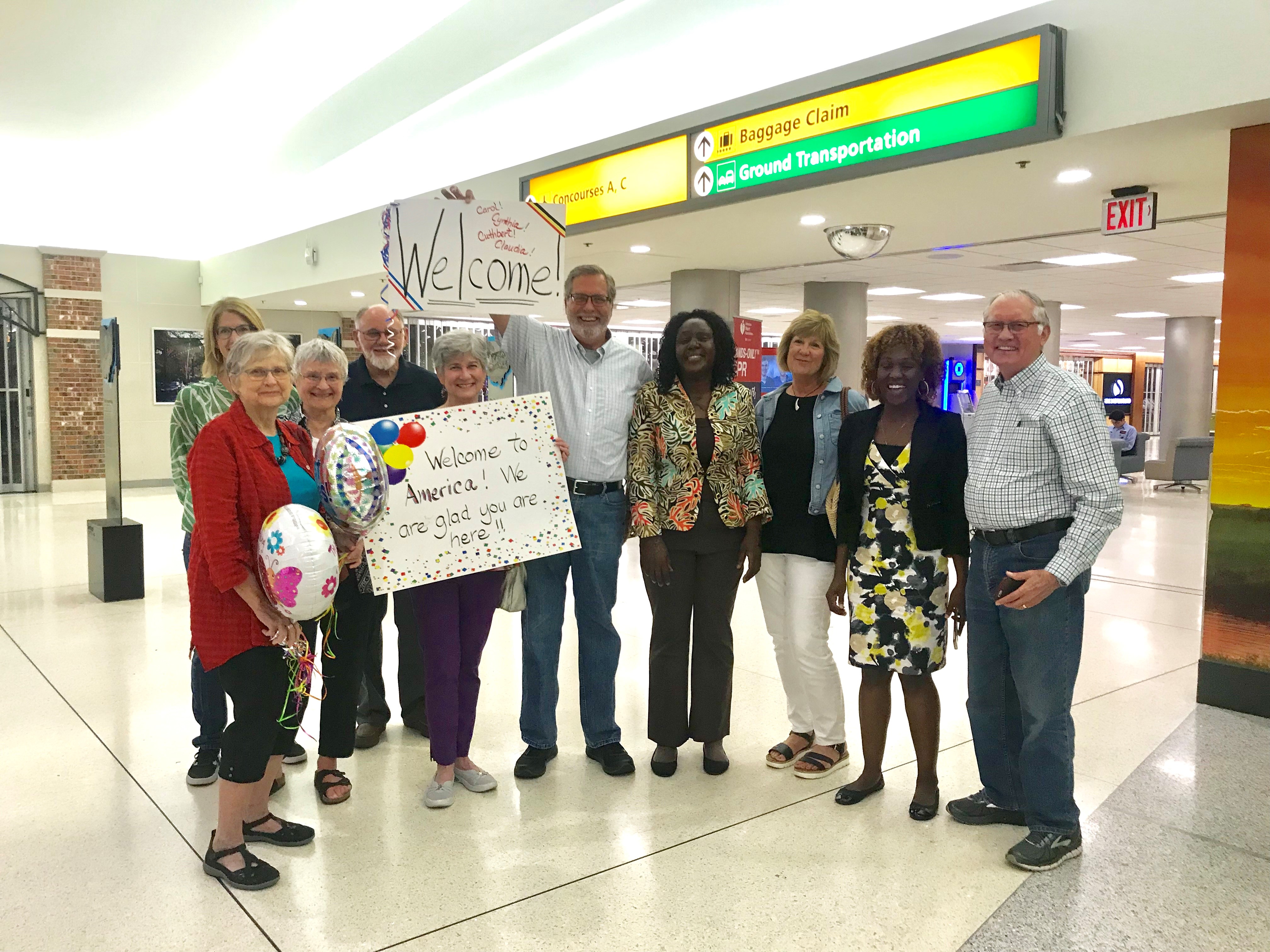 "First Community Church has had a Refugee Task Force for decades, but it has been reborn since the last presidential election," Shaner said. In collaboration with CRIS, FCC has welcomed, so far, 38 families to the Columbus area.

"Our Refugee Task Force members are building authentic relationships with our refugee neighbors because we are called to be together as church," Shaner continued. "I want our members to be comfortable saying my solidarity with our refugee community isn't political—my faith compels me to stand with them. We are creating advocates, people who understand welcoming the stranger and most vulnerable among us is a moral, theological issue. That has really been a shift for us. Encouraging people to live their faith out loud in the world actively advocating for justice.”

Helping Baliraine make a home for her children was one way to do that.

"Deborah Jane got in touch with us a few weeks ago and said my kids will be here this day. Within literally a week our refugee task force at the church found her a new apartment with three bedrooms. Fully furnished it and got it ready to go," Shaner said. Task force members also helped Baliraine move before the kids arrived on June 24. Now the mom and children have space and time to get acclimated to Columbus. 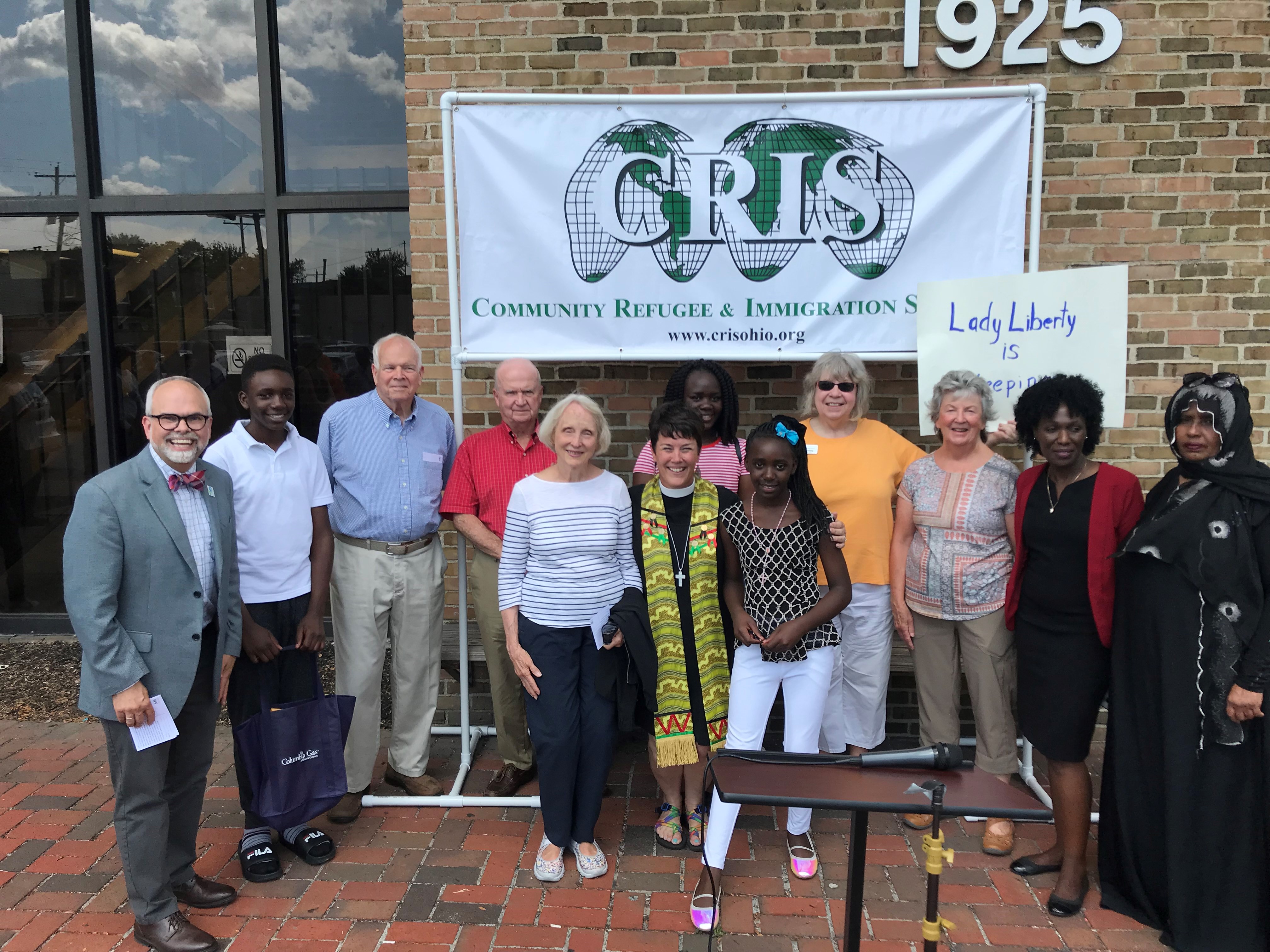 The First Community Church task force also provides tutors for in-home classes in English as a Second Language for women or people who are fearful. They provide financial assistance to CRIS. Members meet with Deborah Jane and with Jackie Kifuko, a CRIS Refugee Organizer, once a week to work on public speaking. They participate in press conferences, most recently on Tuesday, joining Kifuko and CRIS representatives to speak out against suspected cuts in the U.S. refugee resettlement program. They've also established contacts in the office of U.S. Rep. Steve Stivers, a Republican whose district includes part of the Columbus area.

Thee connections, Kifiko said, are important. "Now we feel like we have a community. Before this, we felt like nobody was listening."

Notified in February 2017 that her children had been approved for resettlement by U.S. Citizen and Immigration Services (USCIS) in the Department of Homeland Security, Baliraine began sharing her story publicly after the Trump administration changed the policy for family admissions. She became her own best advocate while enduring several painful surgeries to repair the damage to her face and neck from chemical burns. "It's not because I am bold," she said, "but my struggles have inspired me to speak out more." Baliraine connected with the church and Shaner in 2018 through CRIS as she tried to find a way bring her family here, to make the government live up to its promises to allow her to sponsor them. 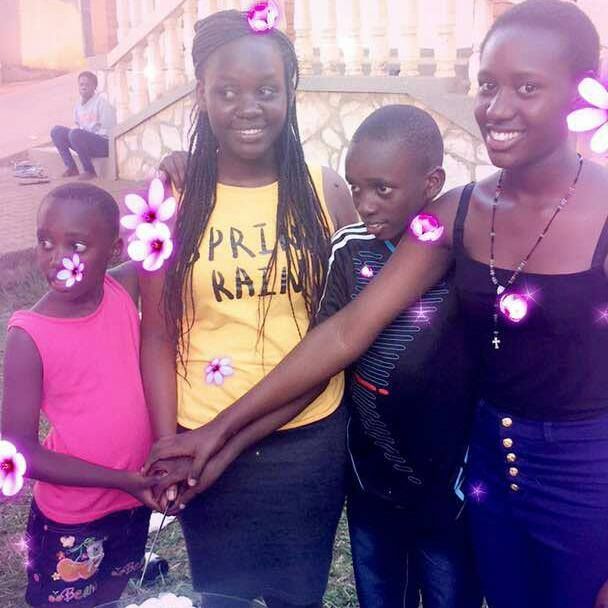 After spending more than a year working with CRIS, petitioning government officials and speaking out publicly, Baliraine decided in late October to go back to Kenya, where her children had since resettled, to fight for reunification of her family. She asked Shaner for help. The Columbus church helped coordinate her flights, prepared supporting informational documents and a letter from the congregation. The ministry also reached out to the UCC National Officers in Cleveland, and Revs. John Dorhauer, Traci Blackmon and James Moos sent a letter to Ambassador Robert F. Godec at the U.S. Embassy in Nairobi in support of Baliraine's case.

Shortly after her return from three weeks of meetings in Africa, Baliraine was notified that her children would be joining her in Columbus in early 2019. She was thrilled to share the news.

"I am writing with great joy to let you know about the promising news about my children in Nairobi. The process to join me here is almost done now," she said in early December. "It is exciting to me and I am so grateful with all the support that came from UCC and the First Community Church while I was traveling to Nairobi.

"The two letters from the UCC, from First Community Church, the signatures from members of the Church, attached with my medical records and the children's condition, added a lot to [meet] the requirements needed to become eligible to expedite my children's cases," Baliraine added. "Traveling to Africa was a great idea but the supporting documents to attach to my expediting request made it a success."

As Baliraine starts a new job with Cameron Mitchell Restaurants and gets her kids ready for school in the fall, Shaner said the task force is setting its sights on reuniting another family. 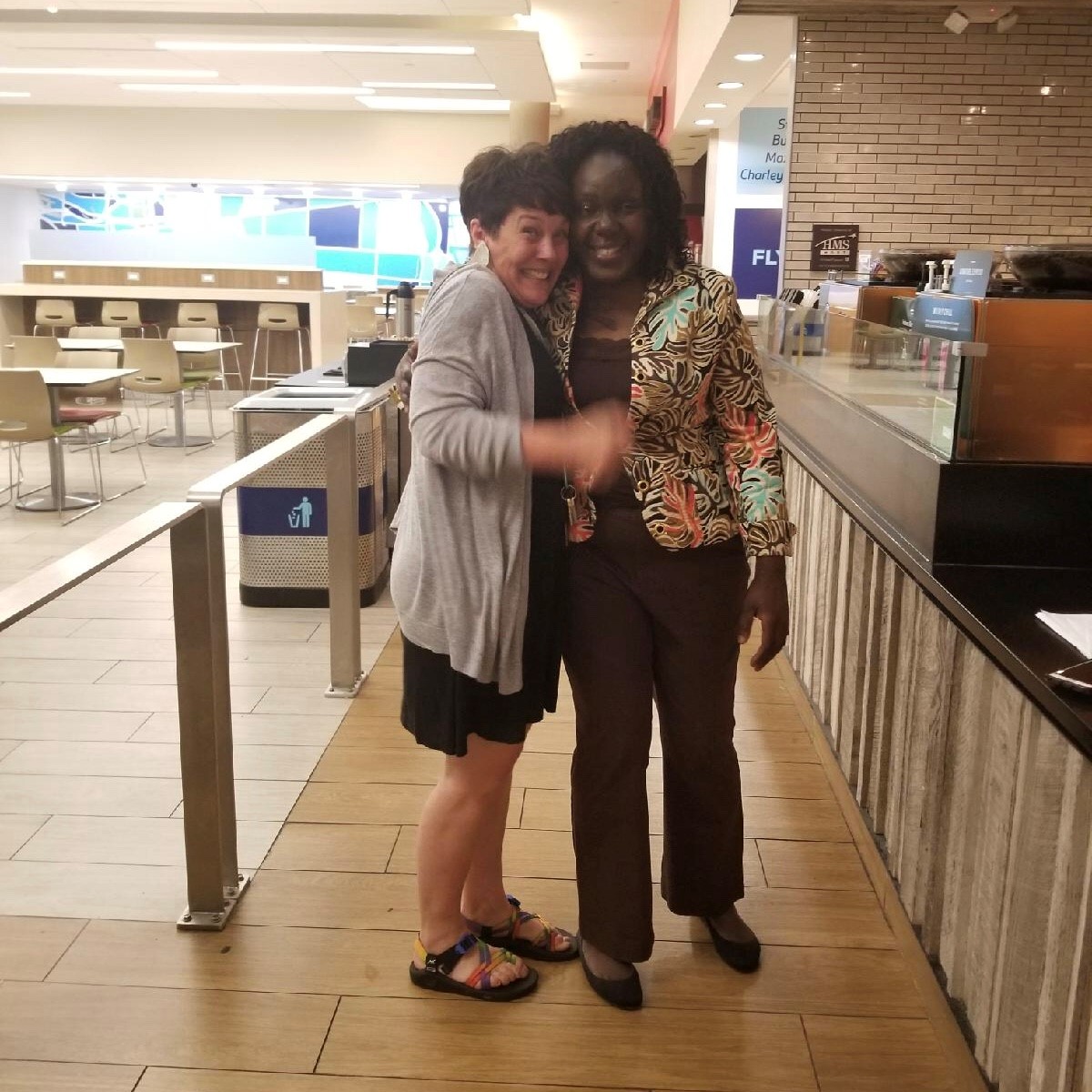 "We hear that the number for refugees next year is expected to be lower than ever before," Shaner said, noting that FCC plans to help another refugee mother bring her son to the U.S. "Every step of helping Deborah was something we’ve never done before. I kind of felt like Mary when she said, 'Ok, I'll do it.' Our yes was imperative because the ask was so important. We just needed to act and trust.”

It's something that other communities of faith can replicate too.

"People are really looking for some way to help. One of the things that people can do is get involved with their local refugee organization. Volunteer to take someone somewhere or offer to be an ESL tutor. Talk to someone who doesn't look like you. It's easy for us to dehumanize people if we don't know them," Shaner said. "Getting involved makes a difference — it matters. If First Community didn't jump in, I think it would be a whole different ballgame.

"These times are testing people. It's heartbreaking to hear a mother say, 'My child isn't with me, and they are saving their pennies because they think I can't buy them a plane ticket.' The greatest commandment needs to be our number one priority — it needs to be loving our neighbors."

Churches interested in helping refuges and asylum seekers can learn how at the Refugee Engagement page of the UCC website.

"While most people of the church haven't been refugees where they are put in a situation that they have no control over, they have a lot of voices to speak out and that helps tremendously," Kifuko said. "They also have beautiful hearts, generosity and love."

The numbers of refugees resettling in the U.S. has dropped drastically — from 80,000 in 2016 to just over 20,000 last year, a historically low number. More cuts are expected in 2020. Take Action to tell your Congressional representatives that this country should not stop the welcome.