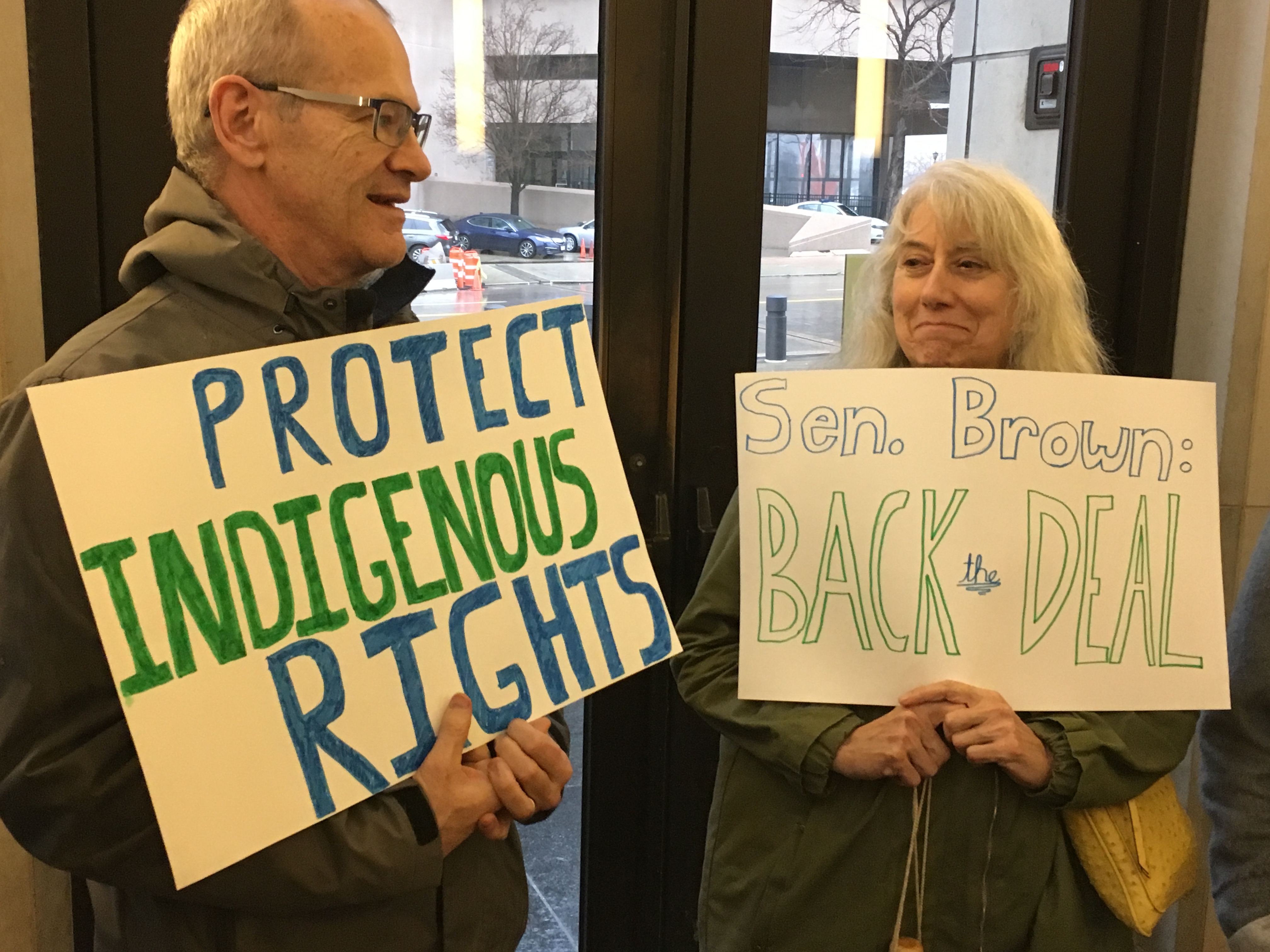 UCC executives and environmental advocates are joining other allies concerned about climate change in speaking out for the Green New Deal.

"It's a massive program of investment in clean-energy jobs and infrastructure that would transform not just the energy sector, but the entire economy," said the Rev. Brooks Berndt, UCC minister of Environmental Justice. "It is meant both to de-carbonize the economy and to make it fairer and more just."

The Green New Deal is the Democrats' latest plan to tackle climate change. Introduced in Congress on Thursday, February 7, by Rep. Alexandria Ocasio-Cortez, D-N.Y., and Sen. Ed Markey, D-Mass., the resolution calls for a complete transition to renewable energy by 2030.

The UCC National Officers immediately offered their enthusiastic support, noting in a statement that the legislation mirrors the Church's concern for creation and the marginalized. "Environmental justice is at the heart of the Green New Deal, recognizing that climate change threatens the safety, health, and dignity of ordinary people."

They also urged the wider church to get involved, calling the proposed Green New Deal legislation "our invitation to bring our denomination's decades-long commitment to environmental justice and climate justice into the public square." 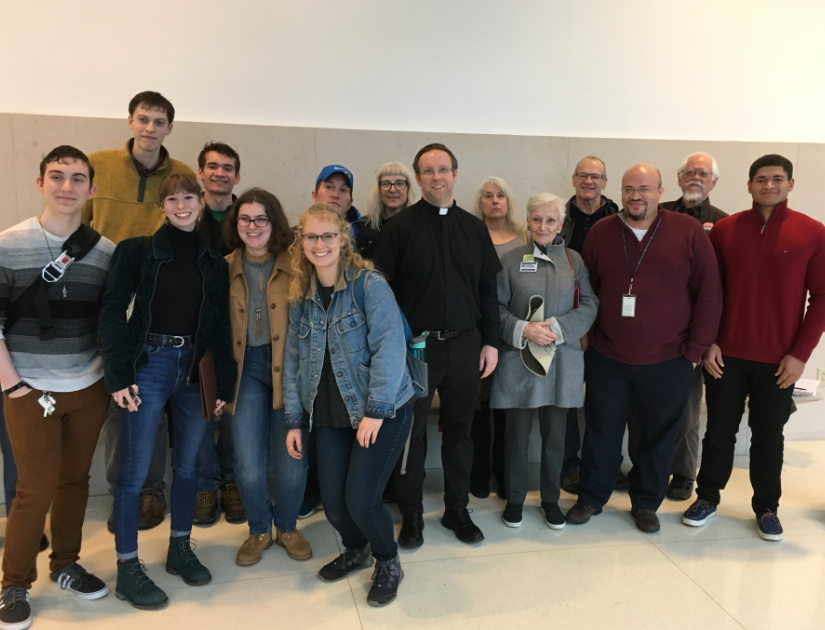 Rev. Berndt, looking to make the Green New Deal one of two central areas of focus in the UCC's Environmental Justice Ministry this year, accompanied campus organizer Emily Hudson, several Oberlin College students and other Cleveland area environmental activists to the local office of Ohio Senator Sherrod Brown on Thursday afternoon. They asked for Brown's support of the legislation, presented staff member Ken Williamson with a petition signed by thousands of Ohioans, along with a letter urging these specifics:
— Halt all new fossil fuel extraction, infrastructure and subsidies, and transition power generation to 100% renewable energy by 2035 or sooner.
— Rapidly decarbonize agriculture and transportation sectors and expand access to public transportation.
— Ensure a Fair & Just Transition led by impacted workers and communities, including low income and communities of color, without relying on corporate schemes or market-based mechanisms.
— Uphold Indigenous Rights.
— Pass a national jobs guarantee, creating good jobs with collective bargaining and family-sustaining wages. 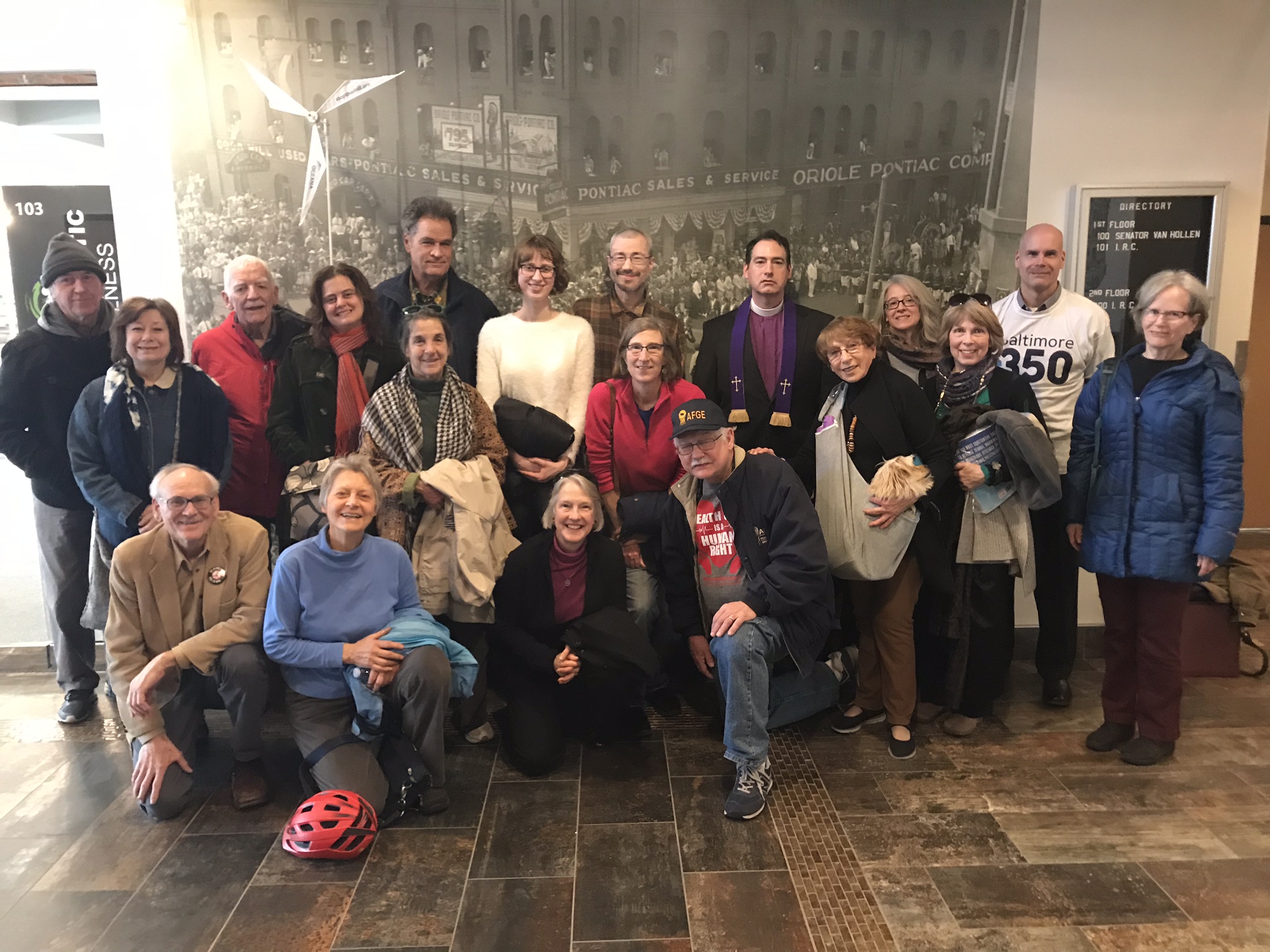 On Friday, Rev. Alex Vishio, acting Associate Conference Minister of the Central Atlantic Conference United Church of Christ, represented the UCC's Environmental Justice Ministry at the office of Maryland Senator Christopher Van Hollen. Vishio was one of about two dozen people at a meeting initiated and organized by the Baltimore chapter of 350.org and First & St. Stephen's UCC in Towson, Md. The group presented the Senator's office with a petition consisting of 1,742 signatures urging the senator to become a signatory on the Green New Deal resolution.

"The resolution is very much keeping with our historical commitments to the safeguarding of the earth, the welfare of the oppressed and the marginalized, and the advancement of the common good. It is my fervent hope that a resolution in support of the Green New Deal will be presented for the delegates' consideration at the upcoming General Synod," Vishio said. "Quite simply, we are out of time for half-measures and delayed responses. The problem that confronts us is immediate and on a global scale. Only an urgent response that addresses in a global way — or that is at least a national response that models an address in a global way — the catastrophic problem of climate change with which we are beset is sufficient to our needs and the needs of this good earth. Such is the promise of the Green New Deal. And such, I believe, is what the church in general, and the UCC in particular, is called prophetically to witness to and advocate for at this Kairos moment — a in both its critical and opportune senses — in human history."

Other UCC ministers are following the call of the Executive Officers and the moral mandate declared by General Synod in 2017 that urges "clergy to speak from their pulpits about the moral obligation of our generation to protect God's creation."

"The Green New Deal is the kind of values-driven policy the United States needs to address the reality of climate change and to provide a hopeful vision of the future for America's children. It is a work in progress, and we can debate details, but the approach is much needed," said the Rev. Chuck Currie, university chaplain and director of the Center for Peace and Spirituality at Pacific University. "I hope the faith community works to promote this agenda. Climate change is a worldwide emergency and should be addressed as such. As people of faith, we have an obligation to care for Creation."