More than 500 delegates and visitors to the United Church of Christ General Synod took to the streets of Milwaukee Monday, joining more than 100 local activists in a rally calling for a change in policies that separate immigrant families.

Delegates first voted that morning to delay the start time of the afternoon session to allow all Synod-goers to participate in the mile-long march from the Wisconsin Center to the local office of U.S. Immigration and Customs Enforcement.

UCC advocates, chanting, “Don’t be a hater; Love your neighbor,” "Classrooms, not cages," and “UCC is loud and clear; Immigrants are welcome here!” filled the sidewalks in a massive wave of people that flowed almost a mile through the streets of downtown Milwaukee.

A small knot of early arrivals, mostly local activists, handed out signs and organized a picket line, then watched as a huge wave of UCC members approached down the street, chanting, singing and waving handmade signs and banners. 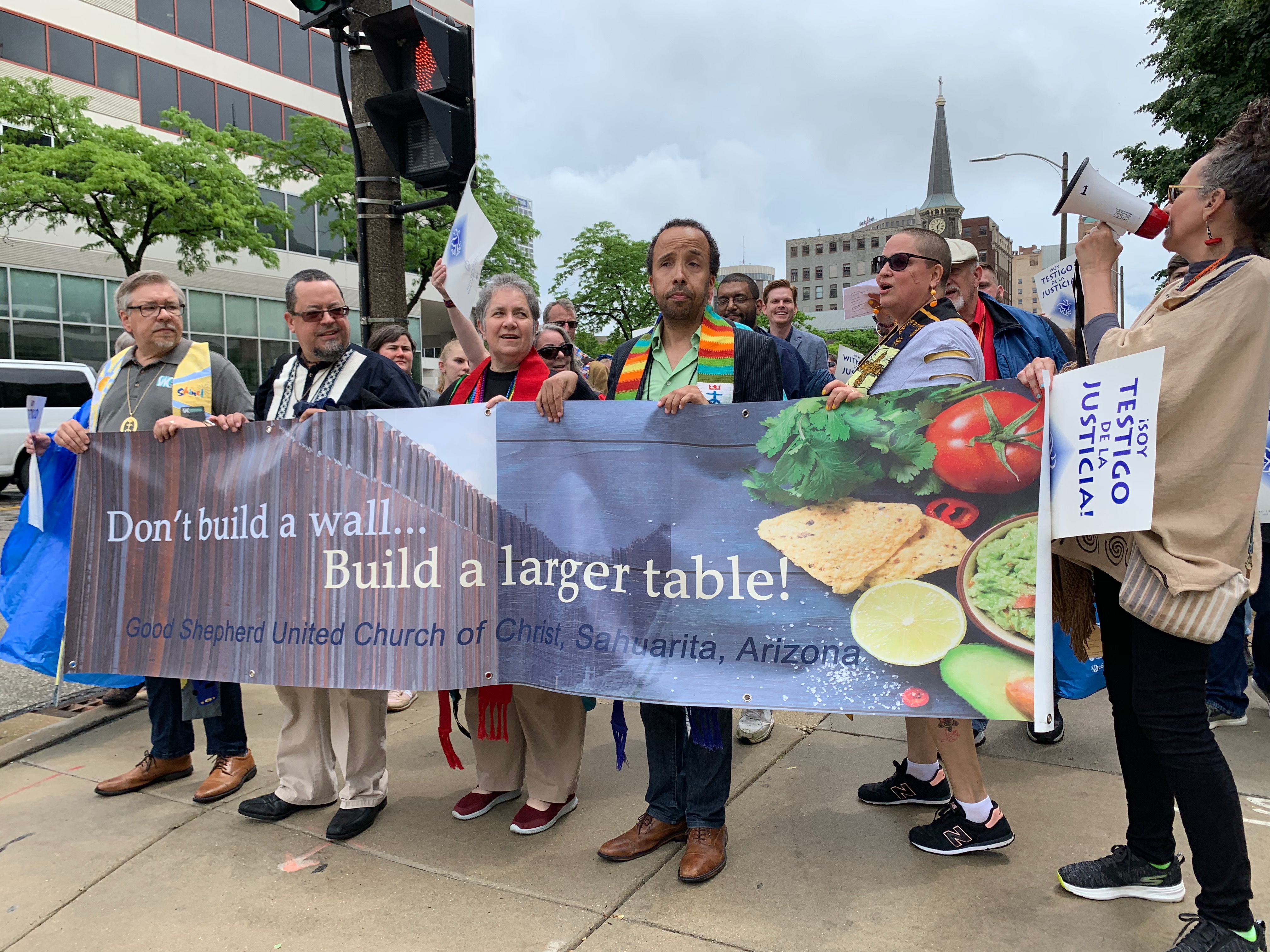 Virginia Summerville, from West Palm Beach, Fla., said she was marching on behalf of a friend who was deported. “We have a lot of immigrants who are mistreated and living in fear. We need to send a message that there are a lot of us in favor of having immigrants here.”

Lydia, a youth marcher from Milwaukee who did not provide her last name, said that “a lot of time people have misconceptions about churches and church groups, but it’s also important to those in the same faith to see that people like us are standing here in solidarity.”

The Rev. Traci Blackmon, associate general minister, UCC Justice and Local Church Ministries, who stood shoulder to shoulder with other clergy reminded the crowd near the end of the hour-long rally, “We understand that if we are not all free, none of us is free.”

Blackmon declared: “We will go to every state, we will open our churches for sanctuary, we will block this action with our very bodies.” 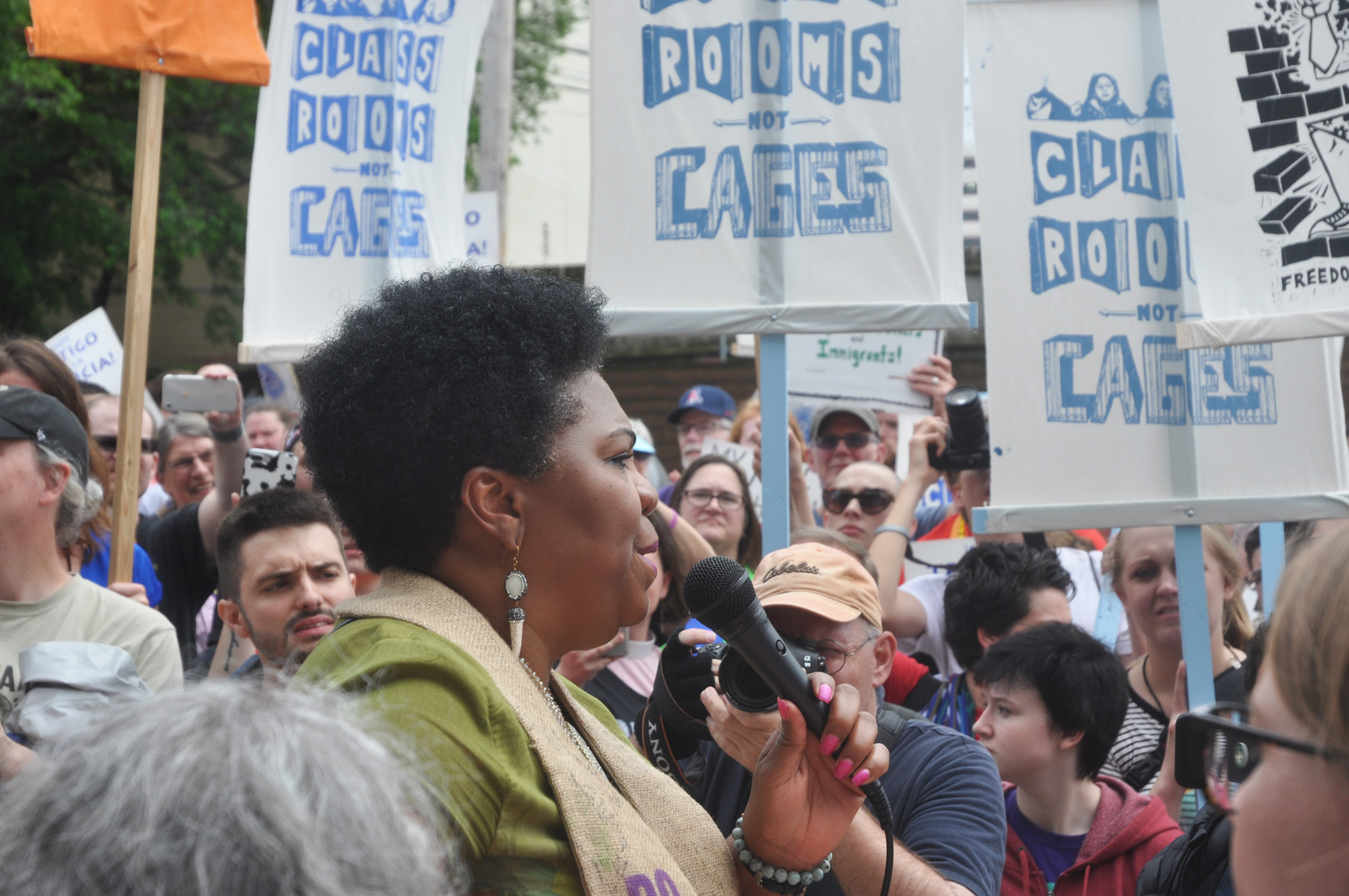 Local groups, including La Voces de la Frontera, planned the rally, in response to the deportation of Betty Rendón, a  student pastor who served  Emaus Evangelical Lutheran Church in Racine.

Rob Ellinger, a retired Evangelical Lutheran Church pastor, told the crowd that Rendón came to the United States to escape death threats in her native Colombia, and “now our government sent her back. But we say ‘no more, no more.’ ” 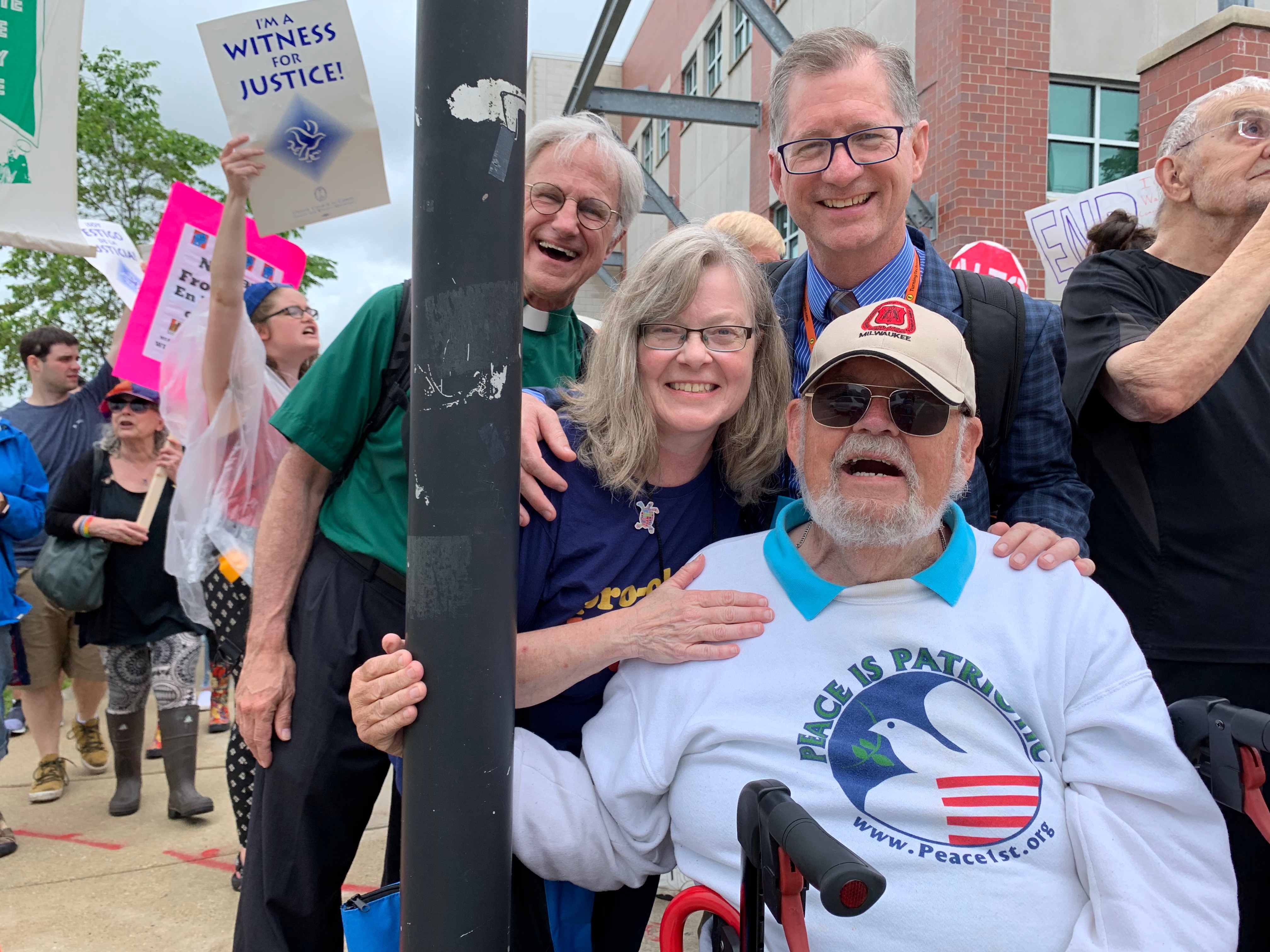 Jim Cusack, a veteran from Lake Geneva, about 50 miles northwest of Milwaukee, said he has been coming to the ICE office to do a silent witness, usually the first Thursday of the month, for the past 13 years.  “We are here to show our rage,” he said as he joined Monday’s rally.  “The shame of discrimination brings me here.”

Local union veteran George Martin said immigration and labor are connected, and Milwaukee needs more workers. “We don’t have enough workers to handle the DNC (Democratic National Convention next summer in Milwaukee.) He added, “This is really all about how we see people who don’t look like us.” 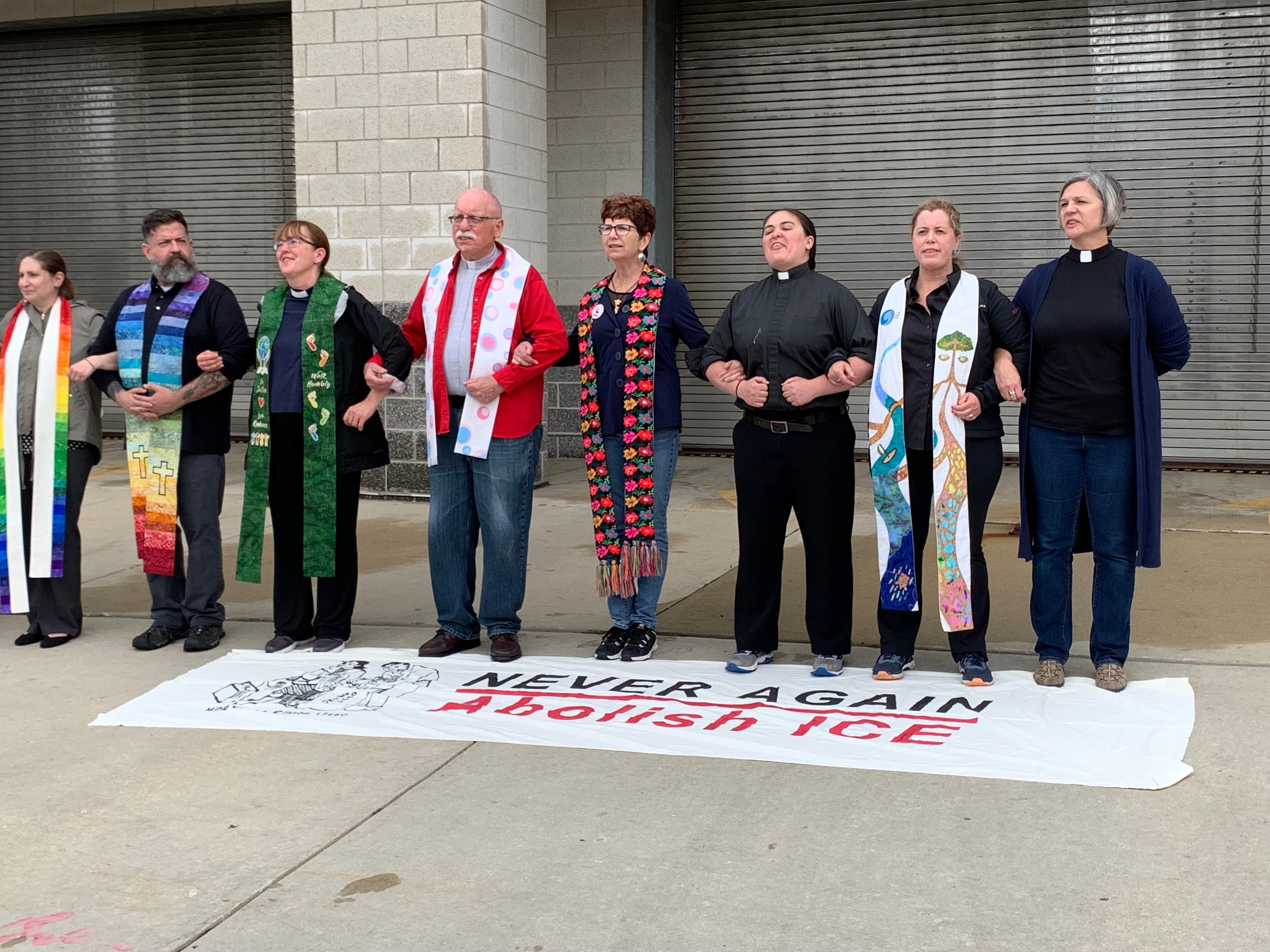 Pastors who were prepared for arrest lined up, arms linked in front of a rear entrance to ICE headquarters, then joined others out in front after police made room on the street for the speeches that ended the rally. The Rev. John Gage, pastor of the Congregational Church in Needham, Mass., helped to lead the chants on the line. Pastor Kristin Gorton of Memorial UCC, Fitchburg, Wis., said that ICE rounded up six people in her community last September, and the community has since been providing accompaniment for more immigrants who live in fear.

Pastor Vanessa Cardinale of South Congregational Church, UCC, of Amherst, Mass., said that her congregation offered sanctuary for two years to a Guatemalan man and is working with others to provide a home for transgender immigrants at risk. The Rev. Laura Fitzpatrick-Nager, associate pastor, The First Congregational Church of Old Lyme, Conn., walked in honor of a Pakistani family that her church supported in sanctuary for eight months. “They gave us so much!”

From across the national church, clergy and advocates, young and old, shouted for justice for their immigrant neighbors. As the action concluded, the five-year-old granddaughter of Pastor Betty Rendón said bravely, “I’m so happy to see you! Thank you, thank you for coming here!”