United Church of Christ clergy and congregations took leadership, served as hosts, lit candles and planned follow-up actions during many of the hundreds of “Lights for Liberty” vigils held Friday evening, July 12. The events around the country protested the treatment of migrants and asylum seekers detained at the southern U.S. border, in what national vigil organizers refer to as concentration camps.

And UCC leaders are among those speaking out against a coming U.S. Immigration and Customs Enforcement campaign to arrest undocumented persons, announced July 12 by President Donald Trump.

Testimony from a chain-link chancel 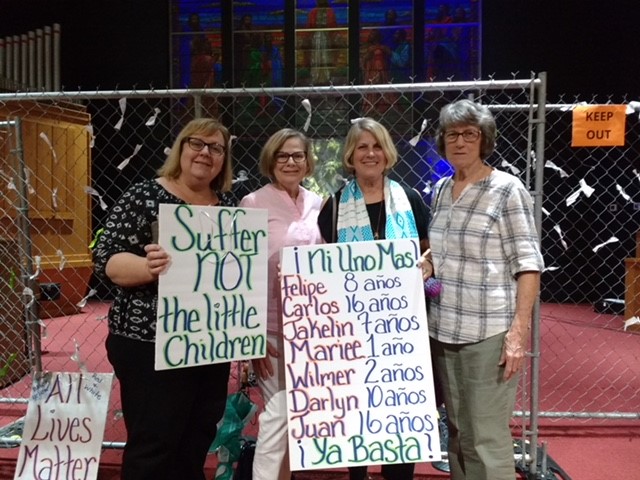 At Lights for Liberty in St. Petersburg, Fla., a chain-link fence stretched in front of the altar of Allendale United Methodist Church. Behind it, 20 representatives of area faith and justice communities – some wearing foil blankets like those issued in detention centers – read aloud from interviews with detainees. One reader was the Rev. Susan Sherwood, a retired UCC minister who belongs to Lakewood UCC, St. Petersburg.

“This was a powerful evening of committed people and organizations, willing to move out of their comfort zone to make a difference,” Sherwood said. “I read the testimony of a sick baby who was denied medical care. As we read, the hundreds gathered lit candles throughout the sanctuary. During the vigil, people wrote words of hope and promise for the children on ribbons of commitment that were then tied to the fence.”

After presentations from the Florida Immigration Coalition, Dream Defenders and the American Civil Liberties Union, participants divided into groups to learn what they could do: visit Homestead, a 3,200-bed “temporary shelter” for unaccompanied children, work for legislation and immigration protection, pressure complicit corporations, and support enforcement of a 1997 U.S. Supreme Court case, Reno v. Flores, that resulted in a settlement between immigration activists and the government.

‘No kids in cages’

In front of Altadena (Calif.) Community Church, UCC, more than 300 Lights for Liberty participants chanted “keep families together” and “no kids in cages” and heard readings of detainees’ words. Some 40 people in the crowd were ACC church members, but most were others from the community, said the Rev. Jerod Yates, a UCC minister and hospital chaplain who is a member of Altadena Community Church and who organized the vigil.

“It’s amazing how the still-speaking voice of the Spirit can lead one to say, ‘Hey, perhaps we can lead a Lights for Liberty Vigil for our community and see how the Spirit catches wind of that and spreads it throughout our church and community,'” Yates said.

California had 92 Lights for Liberty vigils, the most of any state. Lights for Liberty organizers said by Twitter on July 15 that 817 vigils had been held. Among the countries with sites were Australia, Austria, Canada, Costa Rica, France, Germany, Haiti, Ireland, Israel, Italy, Japan, Mexico, New Zealand, the Netherlands, Senegal, South Africa, Spain, Sweden, Switzerland and two “virtual” international vigils online. 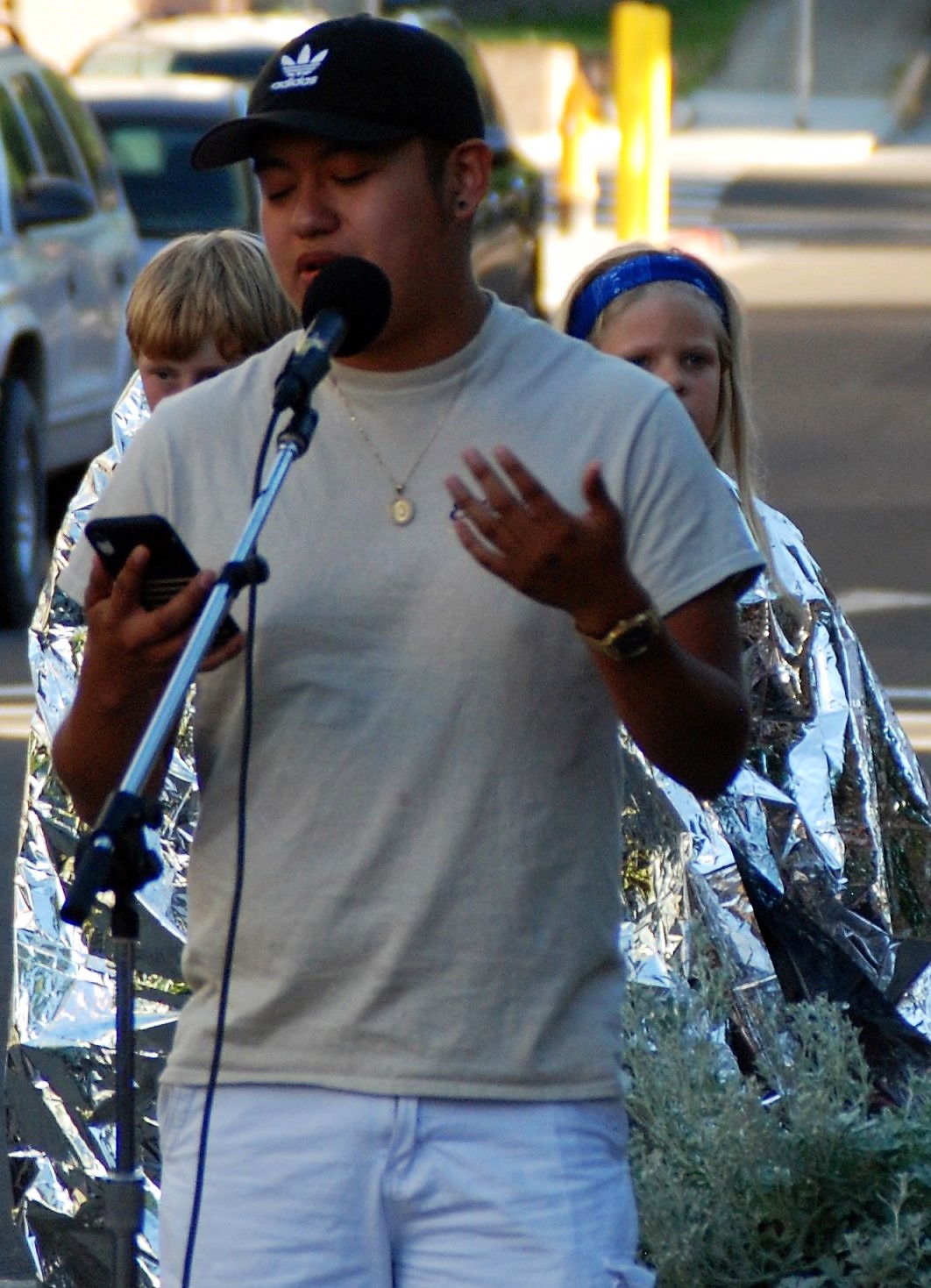 In Pullman, Wash., near the Idaho border, most of the 250 who turned out were not church-affiliated, said the Rev. Steve Van Kuiken, pastor of Community Congregational United Church of Christ, who organized the vigil. It was natural for that church to co-sponsor it, he said, having recently taken a delegation of 15, ages 8 to 85, to Arizona and Nogales, Mexico, to talk to migrants and activists and see memorials to migrants who had died in the desert.

Community Congregational and a local Unitarian Universalist congregation each had about 20 people at the vigil on Pine Street Plaza, but it mostly drew others from the vicinity of Pullman and nearby Moscow, Idaho, “who are compassionate and who want to stop this insane policy of cruelty,” Van Kuiken said. The event’s co-sponsor was Palouse ProActive, a nonpartisan community-action group devoted to democracy and civil rights. Speakers included representatives of a legal clinic that works with immigrants and a support group for undocumented Latinx students at Washington State University. Attendees received cards with QR codes, which, when scanned with a smart phone, led to websites where people can volunteer or take action on immigration-related issues.

In his remarks, Van Kuiken noted the overcrowding of detention facilities and the harsh conditions there, well documented by media reports. “It is important to know that detention is not a legal requirement,” Van Kuiken said. “This is all unnecessary. The Department of Homeland Security has the discretion simply to process and release asylum seekers. And so we call upon Border Patrol to release anyone who is not a public safety threat and to stop detaining people in inhumane conditions.

“We need to stop punishing people whose only crime it that they are begging for mercy. Mistreating them will not solve the problem and stop them from coming. These inhumane policies and this cruel treatment of these children, women and men who are desperately seeking safety are an ugly stain on the fabric of this nation. And we must do better. …

He read out the names of each of the seven children who have died recently in border custody. Each name was followed by silence.

Motorcyclist tries to drown them out

At Pioneer Park in Casper, Wyo., Lights for Liberty’s opening moment of silence was disrupted by a motorcyclist parked nearby. He deliberately revved his loud engine for a long time, preventing silence and speeches, until three police officers showed up and ticketed him for excessive noise.

“It was one of those moments where you say, ‘OK, that’s part of why we’re here,'” said the Rev. Dee Lundberg, pastor of Casper UCC and one of Wyoming vigil’s organizers. “There’s a lot of meanness out there. I suppose there was an element of making us more in solidarity. Most of us know each other at some level. The more progressive crowd is a community within the community, so we tend to work together and support each other’s causes.” 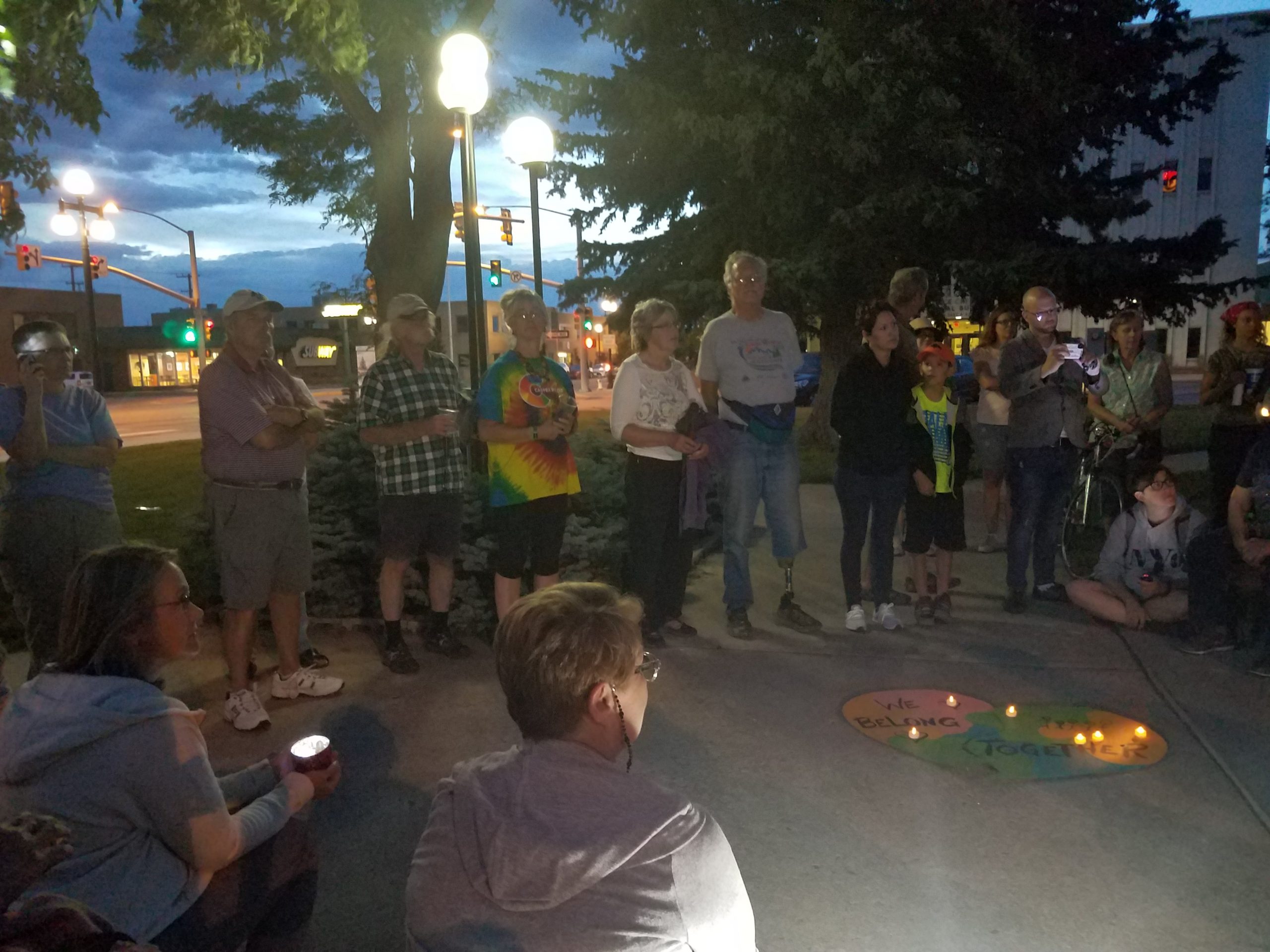 Casper’s vigil focused on “talking about the issues, what we could do, what was worth our time,” Lundberg said. Among those, she said, is “continuing to work harder to build relationships in the community, finding ways to get to know people as human beings versus ‘them versus us.'” She said this can make a difference across liberal-conservative lines in a “red state” where many migrants work in restaurants and hotels, as roofers and construction workers.

“There was a friend of mine who got deported back to Mexico, who has two kids in high school,” Lundberg said. “That’s how long he had been here. Of all the people who wrote letters to support him, to try to prevent his deportation, every one of them was a Republican, and they did it because they knew the guy. That’s how it’s going to work here.”

Of the 40 people at the vigil, eight were from Casper UCC, which will continue its work with immigrants, Lundberg said. This includes hosting Know Your Rights workshops, raising money for legal fees, and helping to keep the free-coat closet stocked at the University of Wyoming’s Family Practice Clinic, where people in need can find medical help.

National UCC leaders speak out, too

Protecting immigrants and asylum-seekers has support from the UCC’s General Synod as well. Delegates meeting in Milwaukee June 21-25 called on the U.S. government to protect, and stop separating, immigrant families, drew attention to the global migration crisis, and rallied by the hundreds outside an ICE office.

“I think [ICE raids] are a form of emotional, psychological violence,” the Rev. Tracy Howe Wispelwey, the UCC’s national minister of congregational and community engagement, told Time Magazine for an article published July 12 at Time.com. “This threat, anyone who is undocumented has to live with this.” She noted the ever-increasing number of congregations, including those in the UCC, that offer their buildings to house and protect immigrants in the sanctuary movement. It’s an encouraging sign, she said, “that the community is stepping up and putting their property and bodies and resources on the line.”

ICE’s own “sensitive locations” memo says enforcement should not be carried out in houses of worship, schools or hospitals, the Rev. Noel Anderson, a UCC minister, said in a July 13 CNN interview. He is based in Washington, D.C., as grassroots coordinator for immigrant rights with Church World Service. “I think most advocates would agree that people should have a legal process in which to come through ports of entry, and in fact asylum seekers are part of that legal process,” Anderson said. “…People say, ‘Get in the back of the line,’ but there is no line, especially for [people performing] low-skilled labor, like construction jobs, restaurant jobs.” Many of them have not had the chance to go to court because they didn’t receive a notice to appear, and many lack access to legal services. “More than 90 percent of the people who have a lawyer are showing up in court,” Anderson said. “We need to support that due process.”