First Congregational Church, United Church of Christ, has a reputation around Old Lyme, Conn., for helping immigrants. It even got national attention in 2018, when The New Yorker magazine profiled a Pakistani family living in protective sanctuary at the church.

Now the church is working with a young asylum seeker who fled violence in Honduras. Lucas (not his real name) only lives at the church part-time but receives lots of other support from the church and community allies.

It’s an example of the increasing demand on local churches and other agencies as immigrants are detained in more and more regions around the country and are sometimes released while their cases are pending.

The Old Lyme church is not alone in responding. Besides the dozens of congregations that offer physical sanctuary or are active in ministries on the southern U.S. border, many UCC churches are supporting immigrants in various ways. To name just a few recent examples: A Honduran refugee is receiving help from congregations in Natick and Walpole, Mass. Eden UCC in Hayward, Calif., is helping a transgender immigrant from Nicaragua. Claremont UCC and Westwood Hills Congregational UCC in the Los Angeles area are supporting inmates of an Immigration and Customs Enforcement detention center in Adelanto, Calif. Maine churches are welcoming and assisting African asylum seekers. In Columbus, Ohio, First Community Church, UCC, is advocating for a Ugandan refugee and recently reunited her with her children.

‘Church needs to stand up for safety and dignity’

U.S. policies have created the magnitude of the situation, said national UCC staff member Amanda Sheldon. Refugee and asylum ministries are part of her work as program associate with Humanitarian and Development Ministries.

“There are two separate things going on,” Sheldon said. “One is meeting humanitarian needs – food, housing, clothes, medical needs, transportation, friendship and accompaniment. Churches are raising this money themselves and other community and faith groups are doing the same and bringing their funds together.

“All of this is ad hoc, as asylum seekers are eligible for almost zero public assistance except for public schooling for their children. Depending on what state they are in they may be eligible for some other support, but that is rare.

“The other dynamic is the legal process. The administration has taken a number of steps through the Attorney General to make winning an asylum case more difficult. This means more lawyers – even pro bono attorneys – are turning away cases they don’t think the individuals can win. Additionally, fewer people who have attorneys are winning their cases.

“This does not mean they do not need asylum; it means their case might not be taken or they may lose their case under the way the parameters for being awarded asylum are being currently understood and applied. Additionally, under the way asylum law has been interpreted, many of the individuals entering would lose their cases.

“The church needs to be prepared to stand up for the safety and dignity of these individuals even if or when they lose their case. And people still need all of that humanitarian support while their cases are pending.”

In a recent sermon, the Rev. Steve Jungkeit, senior minister of the Old Lyme church, likened the situation to one in a Bible story from Exodus. The infant Moses, placed in a basket of sticks and pitch to escape a death decree, is set afloat on the Nile. He is saved downriver by the daughter of Egypt’s Pharaoh – her conscience troubled by her own father’s decree – who pulls Moses to safety. 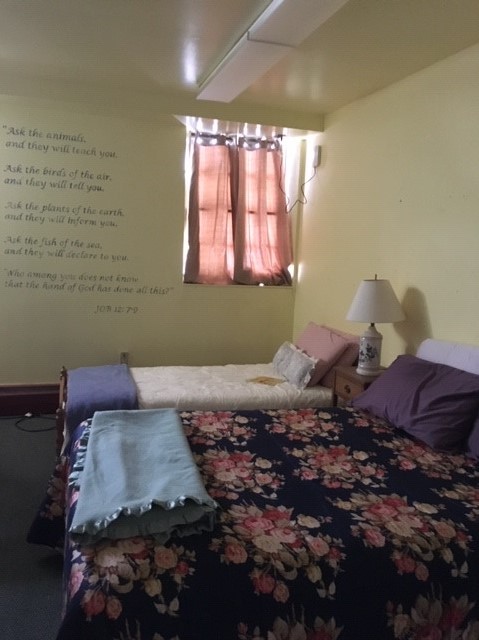 “That’s what’s happening today among those who flow north from places like Honduras and Guatemala, El Salvador and New Mexico,” Jungkeit preached on Nov. 10. “They too are a population deemed extraneous. Some are fleeing violence. Some are fleeing poverty. Some flee a future of servitude, indentured to drug cartels. They leave parents, siblings, spouses and children behind, all of whom fear for their safety on the river, but more for their safety at home. And so they enter the flow of the current, submitting to its power, its force, its flow.”

Just as Moses was rescued by a stranger, so churches like First Congregational are responding – and more are needed, Jungkeit said. He stressed that you don’t have to create a bedroom at your church to help an immigrant. “I think a lot of churches perceive that sanctuary means welcoming people who are threatened with deportation and housing them within the walls of the church,” he said. “We need to keep that option open if needed, but we also need a new model where folks coming through detention can be helped by churches and allies in the community who know how to find out what the needs are.”

That’s what the Old Lyme church is doing with Lucas. “He needs transportation, doesn’t have a car, hasn’t been in country at all,” Jungkeit said. “He needs food. He needs resources like money to be able to exist, so people have been kind enough to hire him to do jobs on the side – raking leaves or doing whatever work they have – and earn a little bit of money.” For all of that, and for specialized needs like education and health care, Jungkeit said church member Lena Tuck continuously organizes “a collection of volunteers who know how to get stuff done.”

‘Detention centers are full to overflowing’

First Congregational found out about Lucas from activists whom Jungkeit likens to basket makers along the immigration river: Vanesa Suárez, a deportation defense organizer with the Connecticut Bail Fund, and Ben Haldeman of the New York City-based Immigrant Justice Corps. Pledges of support for Lucas from First Congregational, a Unitarian church in New London and a Catholic church in Norwich were key factors in an immigration judge’s decision to free Lucas while his case is pending. Experts like Suárez and Haldeman continue to help Lucas.

Jungkeit hopes more congregations will get involved. “People are being shipped up from the border into all areas of the country,” he said. “Detention centers are full to overflowing.” He suggested the ecumenical New Sanctuary Coalition as starting place to find local or regional experts “who can perceive the needs and know who is out there – and be a matchmaker in a way.”

As for “upriver” justice work on U.S. laws and policies, churches and members can consult UCC Take Action alerts – such as recent ones on refugee admissions and funding for detention, deportation and border militarization – for suggestions on how to make a difference.

“What if every community that was troubled in spirit by what’s happening to asylum seekers quit wringing their hands on the shore and waded into the current to retrieve one of those caught up in its flow?” Jungkeit asked in his sermon. “What if we all partnered with basket makers to pull one or two or several people safely to shore? What if, in other words, we all sensed the power of our most sacred stories, and we all chose to play the role of Pharaoh’s daughter in this inhumane and twisted moment of history?”