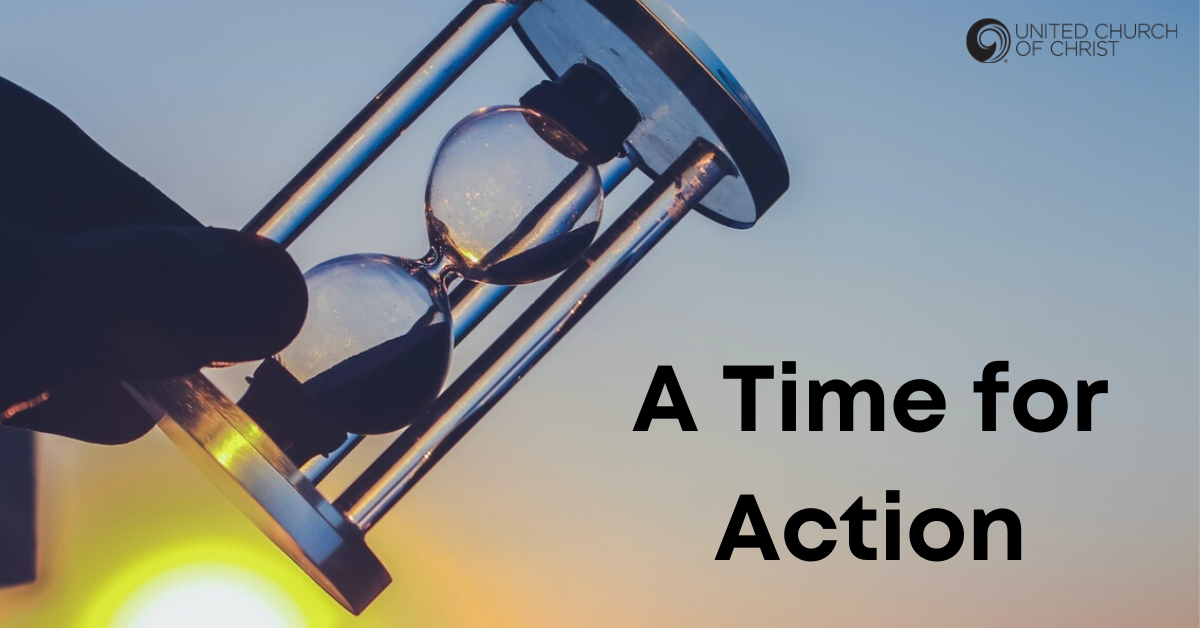 On June 6th, the Annual Meeting of the UCC's Wisconsin Conference voted that their congregations and members would covenant with one another as they made a full commitment to the Kairos Call to Action—a call issued by the UCC's Council for Climate Justice for an all-out mobilization of churches to address climate and inequality. What follows are the adapted remarks of the Rev. John Helt before the vote:

Many of us celebrated the Earth Day Jubilee in April, in the midst of the COVID-19 pandemic. On the first Earth Day in 1970, our nation was torn by racial and antiwar unrest. Some observers at the time doubted that the environment would remain on the radar of social action and public policy for long. But the attention and activism of Earth Day survived, adapted and grew into a sustainable environmental movement. Over time, pollution of air, water and soil began to share the stage with growing concern for climate change and the effort to find sustainable alternatives to burning the fossil fuels that drive it. Now our world is torn by the pandemics of coronavirus and persistent racism, and it may be hard for us to imagine responding to yet another global threat at this time.

But the economic slowdown of recent months hints at an ecological silver lining: Around Earth Day, the planet enjoyed its first real Sabbath, if not Jubilee, since the industrial revolution. Pollution and carbon emissions that contribute to global warming have dipped. As we join via Zoom today, consider the empty parking lots where we would normally meet—parking lots empty of our vehicles, whether Prius or Pick Up, that did not drive from the four corners of this state.  For a week in April, the US cut carbon emissions by about one-third. In February, China cut its emissions by nearly a quarter. India was down 26%. Europe 27%. Venetian canals ran clear. Some Sabbath rest came to land, sea and sky, due to the pandemic response. During this pause and now the relaxed and spotty efforts to sustain it, we can vow to keep an Earth Day Jubilee going!

Just weeks before any of us had heard about a new coronavirus, the UCC Council for Climate Justice issued a Kairos Call to Action. The Kairos Call to Action takes advantage of what Martin Luther King, Jr. called “the fierce urgency of now” to urge our congregations to begin a decade of focus on one of our “3 Great Loves,” Care for Creation. In fact, as Pope Francis put it so well in his encyclical, Laudato Si’: On the Care for our Common Home, earth and human ecology are intertwined, inextricable. That means that as we care for creation, we also care for the other two great loves: neighbor and children.  Kairos reminds us that “protect the environment” is the first mandate of the UCC's “Be the church” campaign. It jogs our biblical memory to our first calling in Genesis as gardeners and earth keepers, and invites us to “take a knee” for Planet Earth. Kairos calls us to seize this moment to begin taking ten practical actions to reduce our carbon footprint and keep the Earth Day Jubilee alive for at least another decade.

The first calls to action are prayer and study. Subsequent actions deepen our commitment and widen our influence. They include, becoming a zero waste church, cultivating our yards and gardens to pull carbon from the air rather than put carbon in it, divesting from the fossil fuel industry, promoting values-based voting, becoming a creation care hub for our wider community, and all the while, whatever creation care work we are doing, telling our story for the sake of others. We need to share the good news of what God is doing through us.

Our vote today will encourage every congregation to dedicate the next ten years to acting on these ten calls to heightened Care for Creation. Start where you are and go as far as you can. Ten practical actions. Ten critical years. Climate science tells us that the next decade will be decisive if we are to interrupt the dangerous course of planetary warming that we are on.  Now is the time.

New Testament Greek uses two words for “time,” Chronos and Kairos. Chronos is ordinary time, passing time—the kind of time that a chronology maps and a chronometer measures.  But Kairos is ripe, pregnant, urgent time. The right time. Jesus uses the word Kairos when he begins his ministry, “The right time is here and the Rule of God is upon us” (Mark 1:15). The Kairos Call to Action is a timely blueprint for faithful witness on the care for creation over the next ten years. This is the time we have been given. It is the right time for us to act.

About our vote today on whether to become the first conference in the UCC to adopt Kairos, the UCC Minister for Environmental Justice, Brooks Berndt says:

“This covenant is without question one of the most significant acts of leadership across the width and breadth of the UCC today. Now, as much as ever, we need those who have the courage to act for justice amid the multiple crises faced today. In acting in this way, you not only set an example for other conferences, but you also give hope as to what is possible in the face of challenge and adversity.”

This is the right time for faithful action on climate change, even in the midst of multiple pandemics. This Sabbath pause is the right time to turn from our ways and live. Let us take the lead here in Wisconsin to see that the Earth Day Jubilee extends beyond this challenging moment, as we look forward in hope for a healthier home for all God’s creatures. As young Greta Thunberg says, “We are now standing at a crossroads in history… We can still fix this.”

Let us covenant with one another to seize this moment and commit ourselves to this Kairos Call to Action, as a Conference, as congregations, as households, and as individuals, joining in the healing of our sacred earthly home.