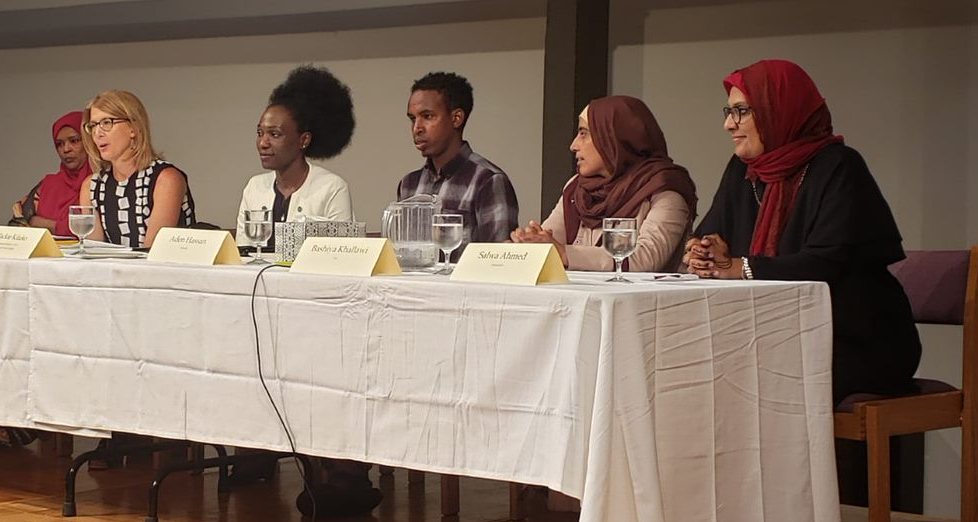 Several refugees in Columbus had the opportunity to have a conversation about family reunification with an Ohio congressman, who came to meet with them and hear their stories at a local United Church of Christ.

“My first and foremost issue is, as a follower of Jesus, the least of these are right in front of our face, Shaner said. “The church is six minutes from his office. We asked him to come and listen. Their holy stories are sacred and they are so valuable.”

And Stivers is invested in the issue. He’s a member of the Bipartisan Congressional Refugee Caucus, a group of legislators who affirm the need for the United States to demonstrate leadership in refugee resettlement and refugee protection overseas. He and more than 30 other members of the caucus in the House of Representatives sent a letter on Aug. 9 to President Trump, Secretary of State Michael Pompeo and the Acting Director of Homeland Security, urging against further cuts in the number of refugees admitted into the U.S. It is expected that refugee admissions for the next fiscal year, beginning Oct. 1, will drop dramatically, perhaps even to zero.

Stivers went to First Community Church on Monday, Aug. 12, with several staff members, to meet with five refugees who have resettled in the Columbus area. Fifty people from the congregation were there to support their neighbors who, up until now, didn’t have a voice.

Angie Plummer, the executive director of Community Refugee and Immigration Services Ohio (CRIS), spoke first, offering thanks for Stivers’ ongoing support of the plight of refugees. As she introduced the individuals waiting to speak, she talked about how of those present had followed protocols laid out by the State Department reunification program or the “Follow-to-Join” pathway overseen by the Department of Homeland Security that allows family members of eligible refugees to immigrate to the United States. But all these refugees and their children have been caught up in the system. These people have loved ones who still are not here. And Plummer said that her agency is handling at least 50 other cases stuck just like this.

“Many of these people think that this is the only opportunity they will get to tell their stories to someone,” Shaner said. 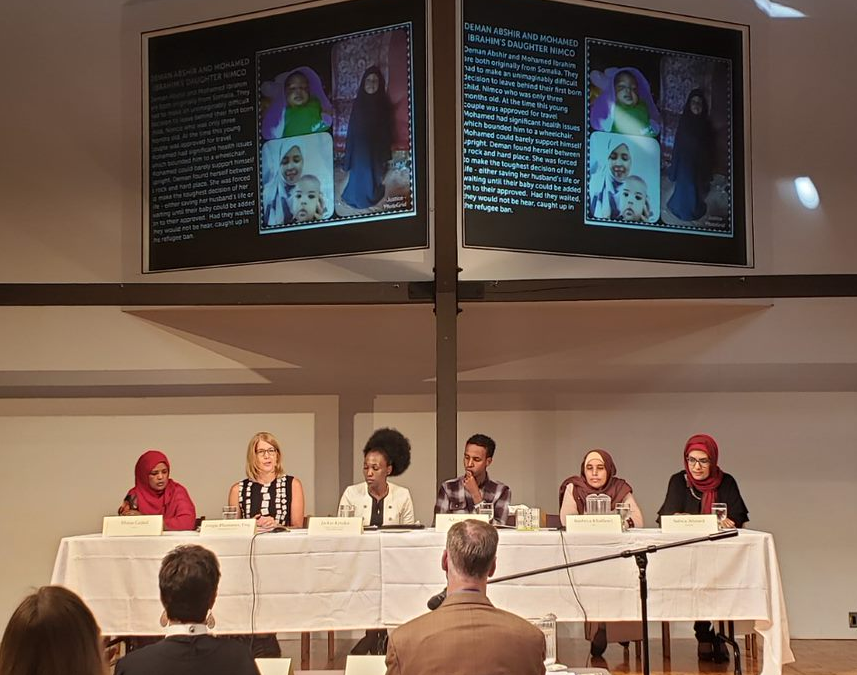 People like Muna Guled from Somalia. She resettled in the Columbus area in early 2013 with her daughter, Awo, and husband, Bashir. Guled applied to bring her other children, one with cerebral palsy, in May 2013, but a U.S. travel ban stopped them. “Her husband died and she misses her children beyond what she can describe,” Plummer said. “Why can’t we get a child with cerebral palsy here?” As she shared photos of Guled’s children on the screen in church, Plummer noted it’s a systematic problem and that’s why they need members of Congress to assist with reunification of all these families.

Plummer then shared the story of Mohamed Ibrahim, who left behind a 4-month-old baby who is now celebrating her third birthday. A Somali national who fled to Ethiopia in 2016, Mohamed faced serious health conditions, was confined to a wheelchair and most likely would not have survived if he hadn’t resettled in the U.S. Had he waited, he and his wife wouldn’t be here because of the government ban on Somalis. “The pain this family has gone through is unacceptable,” Plummer said of the decision to leave behind an infant with paternal grandparents in Somalia. “We can’t expedite the case … There’s no reason not to expedite this following-to-join process for an infant.”

Bashiya Khallawi, who immigrated from Iraq, spoke about being separated from her spouse, who worked with the U.S. military as an interpreter. Her translator, Salwa Ahmed, explained how seven years ago Khallawi‘s husband ended up in Australia while she, her ailing mother-in-law and her two children under 10 were resettled in Ohio. “She asks that you help bring this family back together,” Ahmed said, “The children, they miss their dad.”

The stress that the inhumanity of government policies is causing people was evident as each one spoke.

Aden Hassan from Somalia is still waiting on his mother who should have been here weeks after her son’s arrival. He explained that in the six-year process to immigrate to the U.S. he and his family were divided into two groups. He came first and should have been followed by his mother and his siblings weeks later. “But the president passed the Muslim ban so they cannot be here anymore,” Hassan said, noting that his mother his a diabetic with a heart condition, not someone to be feared. He asked that Americans get to know people like him, instead of believing what they hear in the media, and thanked Stivers for his willingness to listen and to help.

Jackie Kifuko also thanked Stivers for getting to know them through their testimonies. She left behind a small child in Uganda five years ago. Her son is now 7 years old. “When you hear the word refugee … most think refugees are hopeless, that we don’t have a future,” Kifuko said. “A refugee is just like you. We all had a normal life before we fled.”

She explained that she feared for her life because of her work. “The only way I could protect myself and my son—then 2 years old—was to leave. I had to give him to my friend. A number of people fled to Nairobi.” But life Nairobi was very hard and Kifuko lost everything she had. “When I was approved for resettlement in the U.S. I mentioned my son from day one. I said I can’t travel if I can’t take my kid with me. I was told that I would have my kid in six months.”

After finally being able to reconnect with her son, Kifuko said she hears him plead for reunification every time they talk. “Every time I call him, I can’t tell him why we can’t be together,” she said, noting that he is now trying to save enough money to come to her. “These are some of the painful stories you go through every day. Many times people tell me ‘You have been strong.’ It’s not because we want to share our stories, this is private life. You just want someone to listen and understand, to separate yourself from the misinformation out there.

“Thank you for listening to us,” Kifuko told the congressman. “I believe at the end of it all we have to team up and come up with something. Not just listening, but doing something.”

The last speaker was a young woman named Cynthia. She just reunited in Columbus with her mom, Deborah Jane Baliraine, who resettled in the U.S. in 2015. She, her brother and two sisters arrived at the end of June. Speaking for her siblings, Cynthia thanked those gathered for their efforts and their support of her mother, saying she and her grateful family hope to “give back to America.” 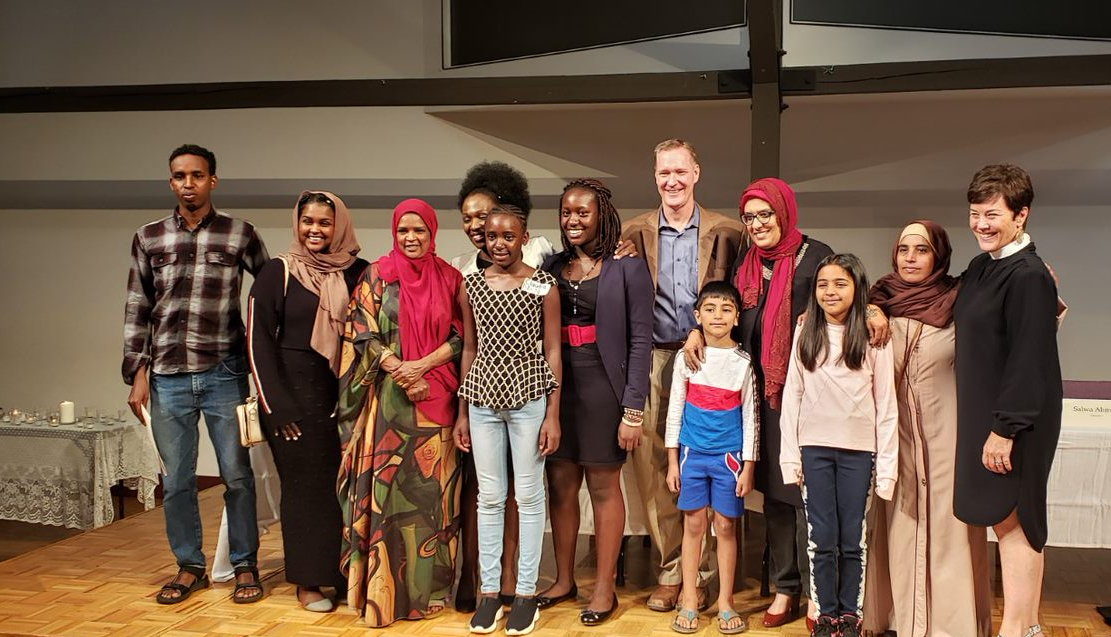 After the interaction, where real people who need help spoke from their hearts, the congressman left vowing to help, Shaner said. “He took the mike and spoke directly to our refugee brothers and sisters. It was very moving. The immigrants and the refugees did the talking. We were simply there to stand in solidarity–to say these people are important to us and their stories matter.”

She hopes all people in the UCC see this as an opportunity to ask what they can do. “You have to contact your elected offices,” Shaner said. “Call them, write them, tell them these stories so they can advocate for you. Get to know the refugees in your community as human beings.

“Jackie and Deborah are so glad to have community here, they are joining the church. We look forward to welcoming Jackie and Deborah and her kids when they come. We know that not everything turns out as beautifully, but you never know until you try.

“It is really the parable of the mustard seed. Just plant the seed and get out of the way. Jesus always said, ‘Follow me’ and ‘Come and see.'”