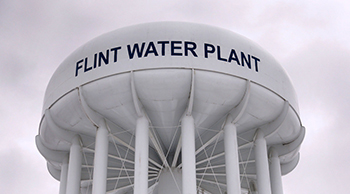 The Third in a Series on Infrastructure Justice

Some years ago, legal scholars Lani Guinier and Gerald Torres turned the plight of the miner’s canary into a parable for race in the United States. As the parable goes, miners would carry canaries with them into the mine to serve as a warning signal. When dangerous levels of gas filled the air, the canary’s respiratory system would become distressed and cause the canary to collapse as an alert to the miners. Guinier and Torres argued that “those who are racially marginalized are like the miner’s canary: their distress is the first sign of a danger that threatens us all.” As with almost every environmental crisis, the parable of the miner’s canary is readily applicable to the current state of our nation’s water infrastructure.

Once the lead crisis in Flint entered into the mainstream media and the consciousness of the public, it was not long before Flint became a warning signal for other communities. In March, USA Today conducted an extensive investigation entitled “Beyond Flint: Excessive Lead Levels Found in Almost 2,000 Water Systems across All 50 States.” The water systems in question serve 6 million people. The report detailed how 600 water systems in particular had tests that reached levels more than double the actionable level. Some of the most alarming cases involved elementary schools with one school testing at 42 times the actionable limit and another testing at a level that would meet the threshold for “hazardous waste.” The article noted that many of the areas most affected are in “rural” or “remote areas.”

The awareness generated by Flint’s crisis prompted some state officials to action. In Oklahoma, an engineer for the Department of Environmental Quality declared, “The Flint, Michigan, situation has really opened our eyes to what’s going on.” The need for increased level of concern, however, is far from over. Not only has remediating action failed to occur on the federal level but it is now evident that the full implications of the canary signal are not yet known. In June, The Guardian conducted an investigation that revealed how at least 33 cities in the US cheated on water tests to “potentially conceal dangerous levels of lead.” About the failings of government authorities to properly test their water, Marc Edwards, the environmental engineer who helped uncover the Flint crisis, noted, “If they cannot be trusted to protect little kids from lead in drinking water, what on Earth can they be trusted with? Who amongst us is safe?”

As a majority black city, Flint is not our nation’s only canary. Detroit is another with a black population of 82.7% and 40% of the residents living below the poverty line. Two years ago the city received international attention when it aggressively shut off water to residents who did not pay their water bills. With the resumption of shutoffs in May, Ryan Felton of the Detroit Metro Times recently noted that “hundreds, if not thousands” are having difficulty paying their bills. In June, a demonstration against water shutoffs featured children as its speakers. Eight year old London Blakely declared, “It’s not fair for me to have water and other people not to have water.” Similarly, ten year old Mariam Toure said, “I think it’s wrong, and it could be me that didn’t have water.” She spoke of three children who only get water at school because of water shutoffs at home.

Notably, these children have done something that many of our nation’s elected officials have not: applied the golden rule to our water infrastructure. At present, it would appear that the country is destined to experience the spread of the kind of problems Detroit has faced. In its report on our nation’s infrastructure, the American Society of Civil Engineers notes that while “the useful life of component parts” in our water systems ranges from 15 to 95 years, “pipes and mains are frequently more than 100 years old.” They foresee that the extensive costs of the inevitable repairs “will be met primarily through higher water bills and local fees.” This only increases the likelihood of more Detroits. As water bills go up around the nation, more and more people will struggle to pay their bills.

When it comes to water injustice, the parable of the miner’s canary speaks especially to the plight of children in low income communities of color. For our country to truly become a just society, we will need to turn away from a system that turns children into canaries. When we do this, we will start living into the ideal of equality and the meaning of the golden rule.

The Rev. Brooks Berndt is Minister for Environmental Justice for the United Church of Christ.