A Case for the Mother of the Environmental Justice Movement: Dollie Burwell 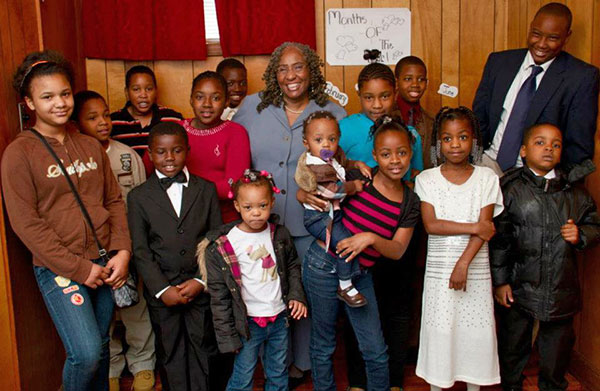 Dollie Burwell with the children and youth of Oak Level UCC

While any social movement owes its existence and power to countless persons, there are those who play pivotal roles in a movement’s inception and development. If one person were to be named "the mother of the environmental justice movement," a persuasive case could be made for Dollie Burwell. In 1978, Burwell teamed up with Debra and Ken Ferruccio to organize community meetings for local residents concerned about the possibility of PCB-contaminated soil being dumped in Warren County, North Carolina. Burwell played numerous influential roles over the course of the coming years as the environmental justice movement came into existence, and one of those roles was to involve faith communities.

Burwell was a veteran of the civil rights movement and served on the board of directors for the Southern Christian Leadership Conference. As community meetings became impassioned, she saw the need for the active participation of churches in organizing nonviolent protests. Meetings were moved from the local courthouse to Coley Springs Baptist Church. Burwell herself was a member of a UCC church. When it came time to organize marches, Burwell asked her pastor the Rev. Leon White to come and offer guidance. At the time, White also served as the regional field director for the UCC Commission for Racial Justice.

In opposition to the first shipment of toxic waste into a predominantly black and low-income community, over 125 persons gathered at Coley Springs Baptist Church to march to the dump site. Some protestors then sat in the road to block the trucks as 60 police officers responded in full riot gear. Burwell and White were both among those initially arrested, while the Rev. Donald Jarboe was injured after being hit by a truck. On the next day, Burwell invited the Rev. Benjamin Chavis, Jr., to lead the protests. Chavis was a UCC minister who was widely known as a former political prisoner in the Wilmington Ten case. Ultimately, the protests would grow and last six weeks as over 500 persons were arrested.

Despite the involvement of high profile clergy, if one asks Burwell today about the significant roles and contributions of faith leaders to the movement, the first person she names is her own mother. About her mother, Burwell recalls, "She often told me, 'Dollie Ann, God wants you to DO JUSTICE and that means you got to always stand up for what is right, even if you have to stand alone.'"

In the unfolding of the movement, Burwell's own role as a mother to two young daughters was also crucial. Her ten-year-old daughter Kimberly insisted on going to the march on the first day. After watching her mother’s arrest, Kimberly herself was arrested and detained. Notably, by the end of the protests, ninety-four juveniles were arrested.  A key moment for the movement as it broke into the awareness and conscience of the nation occurred the first day of protests when Kimberly was interviewed by Dan Rather and appeared on national television news.

Ultimately, even Burwell's two-year-old daughter Mia found a role to play in the protests as she handed out drinks and snacks to marchers. In reflecting back, Burwell now observes, "The Washington Post cited the Warren County Environmental Justice Movement as the largest Civil Rights Movement since the 1960s. I believe that was in part because of the role children played in the demonstrations.” As the history of the movement continues to be written, a strong argument can be made for the central significance of these children and Burwell herself in the launching of a movement whose impact continues to reverberate today.