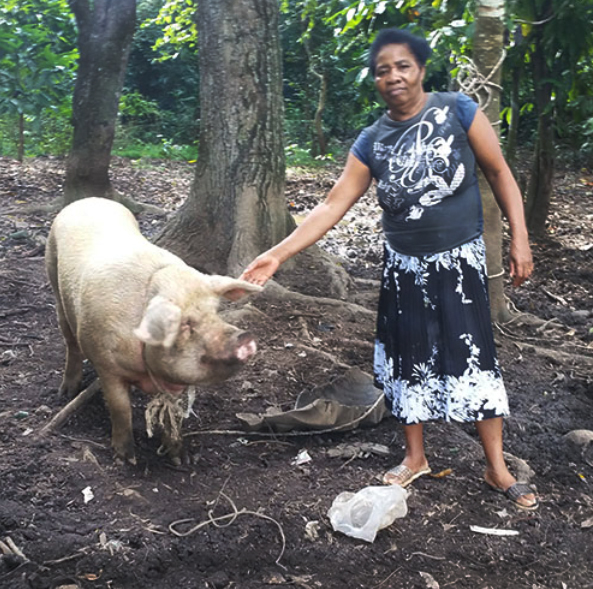 Ramona is a widow with three children who feared she would become destitute. But things started to turn around when she received and raised her first piglet. She gave four of that sow’s initial offspring to neighbors and sold eight, using the proceeds to invest in more animals. She’s sold over 50 pigs to date and made more than $4,000.  Ramona’s business has thrived with help from her children and the day laborers she hires from among her neighbors. She now has nearly 100 animals and a brighter future.

Likewise, Juliana, mother of three, saw everything improve thanks to that one small gift. She has made $620 so far from selling piglets after giving six to neighbors. She’s thrilled that the money helped her send her two sons to school and pay for their school supplies, uniforms, backpacks, shoes and transportation.

Best of all, Juliana’s pig business has brought her back to her community. She used to be a domestic worker in the nation’s capital, Santo Domingo, and made the commute home only on weekends.  Now, she earns enough to stay home, raise and sell pigs, and run a small grocery store she and her husband opened in their home.

The pig project is part of the Foods Resource Bank’s Dominican Republic Bateyes project. These program are supported by One Great Hour of Sharing and encourage love of neighbor. Today, families are “paying it forward,” enabling more and more of their neighbors to make life-changing improvements to their circumstances as well.

Caption: Juliana with one of her pigs
Photo courtesy of CWS. Story courtesy of Foods Resource Bank.