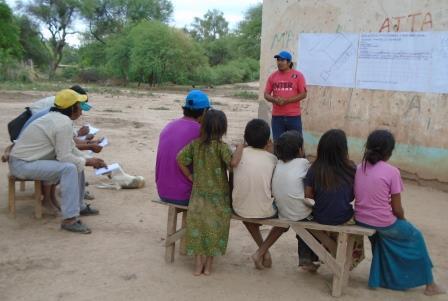 Rebeca and Nestor are promoting peace in their communities thanks to rooftop rainwater harvesting. Conflicts over land and water rights between indigenous people and “criollo” settlers have been a reality for nearly 100 years in the Argentine and Bolivian Chaco. Today, the settlers are as poor as their indigenous neighbors, and the existence of both groups is threatened by frequent six-month droughts. As Nestor puts it, “When it comes to water, there is no difference between us.”

Rebeca is the granddaughter of a criollo rancher, and Nestor a member of the indigenous, historically hunter/gatherer Wichi people. They evaluate and work with communities in the hot, semi-arid region of South America known as the Gran Chaco to find solutions to their chronic water deficits.

Rebeca is one of the few women on a local inter-ethnic team that surveys families. The team calculates water needs and creates maps using GPS in order to ask authorities to prioritize assistance in these remote locations. Nestor is a skilled construction worker who builds 4,000-gallon cement cisterns to hold rainwater collected from rooftops during seasonal rains, and teaches others to do so as well. A natural peacemaker, he is often called on to help solve or prevent conflicts among the groups.

Storage tanks are a practical solution that is proving to ease tensions. Humans and livestock can drink the collected rainwater, and it can also be used for household and agricultural needs that would otherwise be difficult or impossible to carry out during dry seasons.