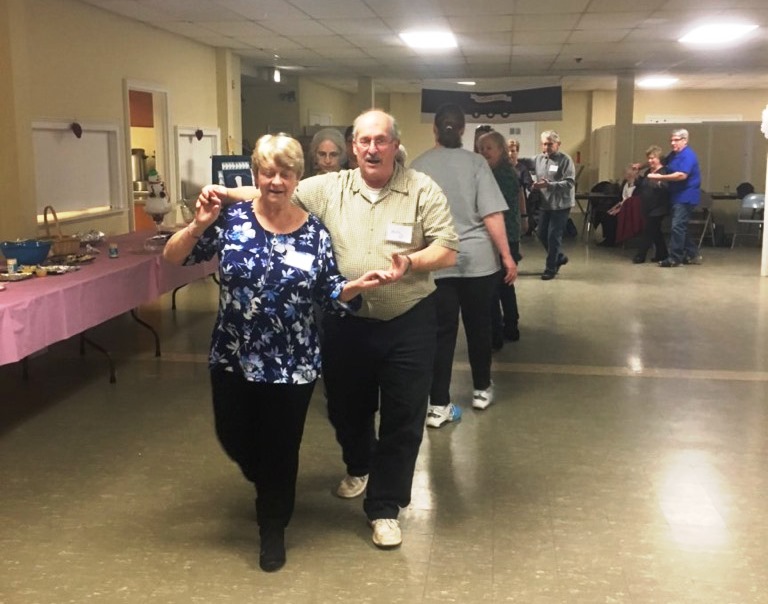 Millie Oliphant of Vernon, Conn., recently translated her passion for line dancing into a fundraiser for United Church of Christ Disaster Ministries. Her eight-week class helped participants chase away the “dead-of-winter” blues and raised $600 for the greater good in the process.

She said the idea for the class, offered Fridays in January and February, was conceived in conversation with the Rev. Robin Bird, minister of the 300-member First Congregational UCC, where Oliphant has been a member for 46 years.

“You know about winter. We get down in the dumps this time of year she recounted. “We wanted to do something fun that people could look forward to. I’ve been taking line dance classes for 19 years and offered to teach a class. I told people, ‘All you need to know is how to walk and count to eight.’”

Oliphant advertised the Friday classes at church and at the Vernon, Conn., Senior Center and Adult Education Center, where she takes dance classes. “People were interested! From 25 to 32 people ages 40 to 93, about a quarter of them congregation members and the rest from the wider community, came each week to the classes at church to learn line dances to several kinds of music, from Country to Latin, and from Charleston to Swing.”

The cost? $2 per lesson – although most people pitched in more. A big “bring a friend” party on the last night also raised money through a raffle to win one of five “Hospitality Baskets,” containing cocoa mixes, special teas, a mug and soup mixes designed for visits to the homebound. In addition, a line dance participant offered for auction some jewelry she had made.

Pastor Bird and Millie Oliphant agreed UCC Disaster Ministries was a good recipient of the funds, tapping into compassion for people struggling to recover from numerous recent hurricanes, drought, floods and other disasters in the United States and around the world.

Plans already are being laid for offering the line dance classes at the church next January and February. “We hope to take what was pretty much a spur-of-the-moment idea and attract even more participants,” Oliphant said.