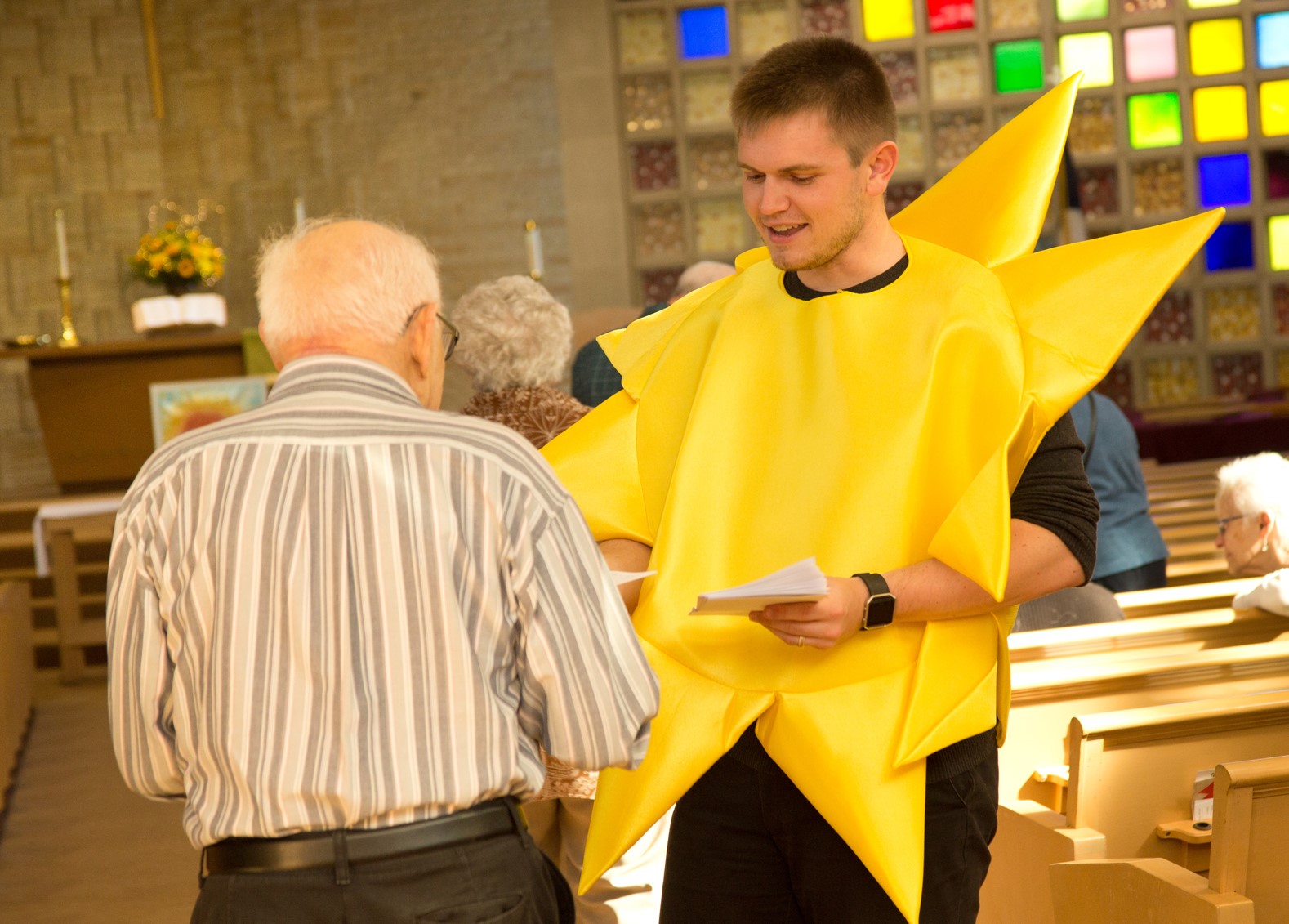 The members of St. John United Church of Christ, Freeport, Ill., know from experience that a clean environment matters. They live near shuttered city factories. They farm the surrounding land. So on Sunday, Oct. 27, they dedicated a solar-panel system for their church roof, aiming to keep 1,000 tons of carbon out of the air while also cutting electrical costs.

In Walla Walla, Wash., First Congregational UCC installed solar panels this year with leadership and gifts from people in town who rarely attend the church but love its progressive ministry.

The two are the latest of some 90 UCC congregations that have gone solar. If your church is considering it, don’t go it alone, leaders of these projects say. You’ll find wisdom, resources and even financial incentives in your city, county or state. The wider UCC has loans and resources available, too.

And while solar churches welcome lower energy costs, they are equally motivated by faith. To them, solar panels are tools of “eco-evangelism” and creation care, one of the UCC’s Three Great Loves.

‘What can we do beyond light bulbs?‘

At St. John, in a small urban community surrounded by agriculture, solar was a logical next step. It had spent more than five years doing other creation-justice work, said its senior pastor, the Rev. Henry E. (Hank) Fairman. “They started with recycling, then light bulbs,” said Fairman, who arrived in 2017. “They replaced every light bulb in the church. Even in the sanctuary, they went from 800-watt bulbs to 50-watt LEDs. They started saying, what can we do beyond light bulbs?” 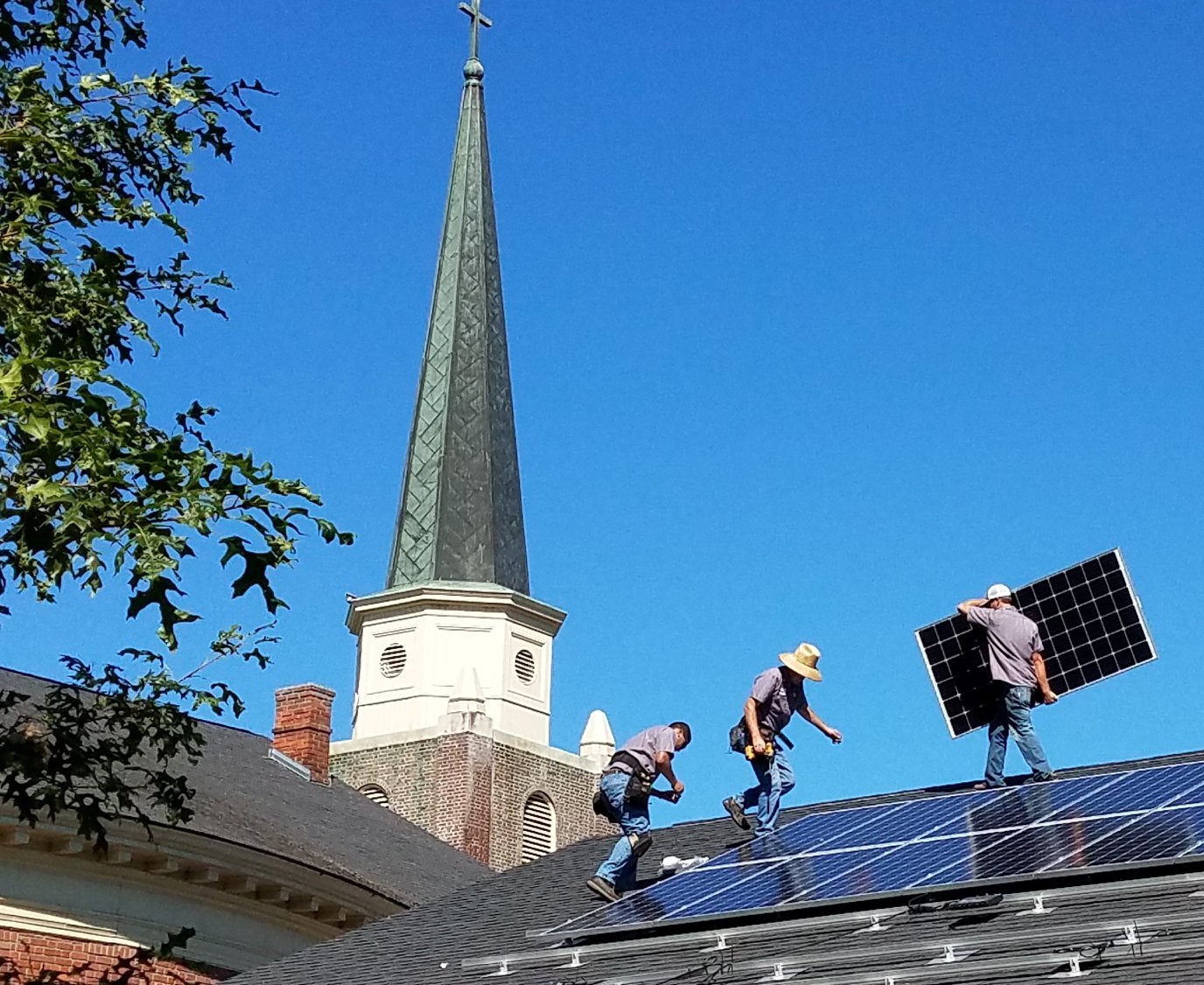 They learned wind power was impractical on their site, so the St. John Green Team invited solar providers in the fall of 2018 to study the 1957 building’s electrical usage and south-facing roof.

“The installers said, ‘You need a 65-kilowatt peak production to accomplish 100 percent of your electrical needs,'” Fairman recalled. “‘That would cost about $130,000.’ We said, ‘That’s a lot.'” With needed roof repairs, total costs would come to $200,000. But there was good news. The church qualified for $95,000 in grants and rebates from the state power agency, which wants 25 percent of energy in Illinois to come from renewable sources by 2025.

That still left serious money to raise, but the Green Team decided solar was a matter of faith. “They felt, ‘The spirit says talk about the environment in Freeport, so go to the congregation,'” Fairman said. At a January congregational meeting, “they talked about everything they had learned, the theology of creation justice and everything we’ve already been doing, and said, ‘We think we should go solar.'”

The team brought two proposals: the full system or a less expensive one that would generate half the church’s electricity. After only 20 minutes of conversation, the congregation authorized further exploration. Working with Property Management and the Church Council, the Green Team came back in June with a figure of $104,000 needing to be raised for the full system. A campaign for that amount was approved unanimously. Lead gifts and pledges came in August, the rest in September. A local bank provided a bridge loan, and the system will be paid off in three years. 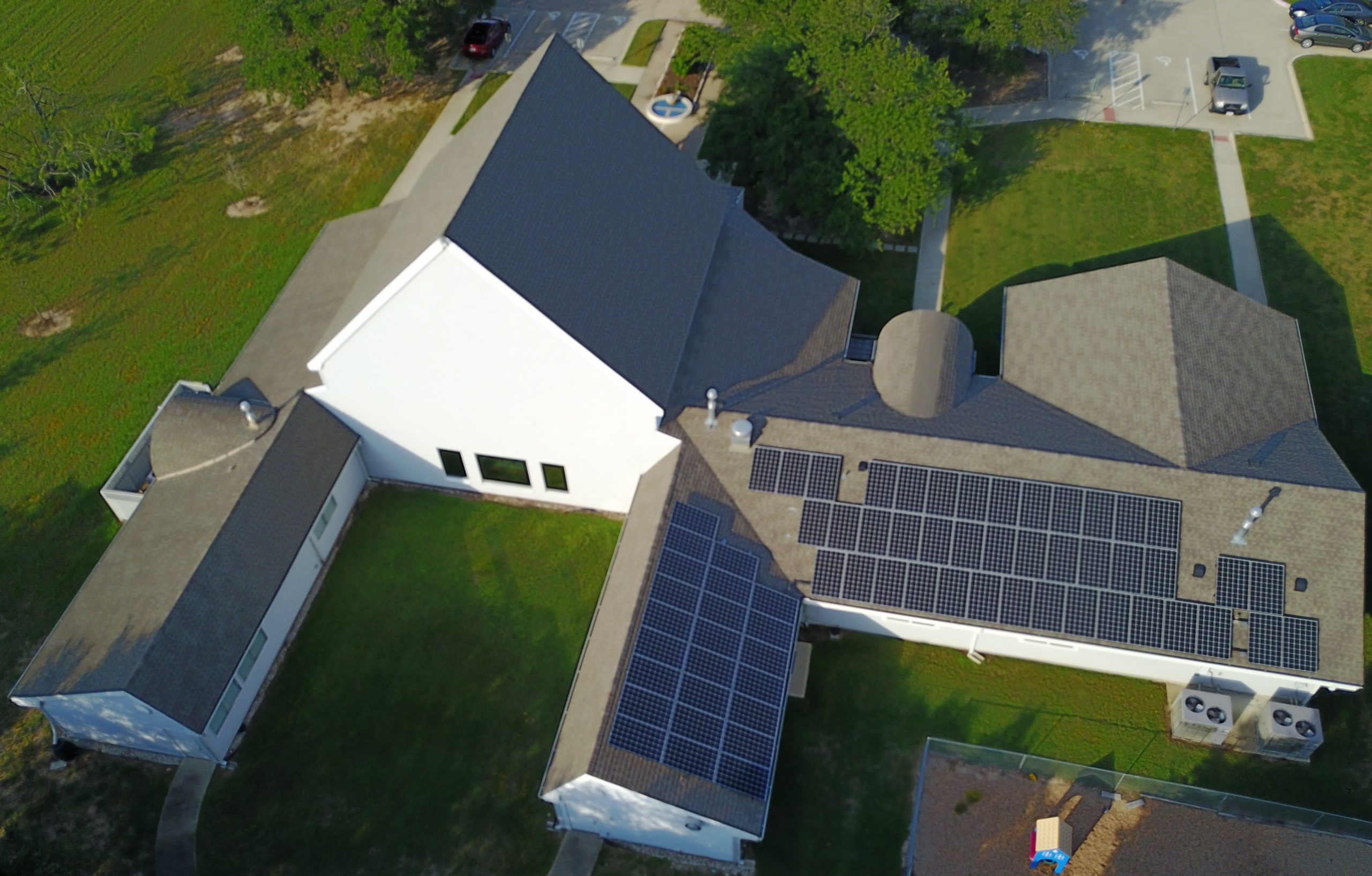 The panels go up in early November. On days when they generate extra electricity, the church will return power to the public grid, thanks to $16,500 “inverter credit” from the utility ComEd. Solar will save the church “about $10,000 in cash a year, flat off the top,” Fairman said. “We’re committing that money back into mission: 10 percent into reserve, 20 percent into expanding local mission, and the rest into our standard mission budget.”

Members are doing personal eco-evangelism, too, and not just for the available tax credits. “About 20 families in the church have already made steps to have solar panels installed at their homes,” Fairman said. “We want to show by example how to live our faith out loud.”

“We’re just kind of on the map in the community: ‘If you need a space for a big public meeting, give First Congregational a call,'” said its pastor, the Rev. Nathaniel Mahlberg. “The Pride Parade starts from our parking lot. We’re involved in immigrant rights. So there’s sort of an outer orbit of people who are like, ‘I don’t go to church, but if I did I’d go to yours.'”

After jaws dropped at an original solar quote a few years ago, the church dismissed putting panels on what Mahlberg describes as its “big, beautiful, inefficient beast of a building,” part of which was built in the 1930s. “We didn’t think about it much until – I’m just excited about it because the whole thing involved enthusiasm from some folks who otherwise weren’t involved in the church closely in other ways,” he said. 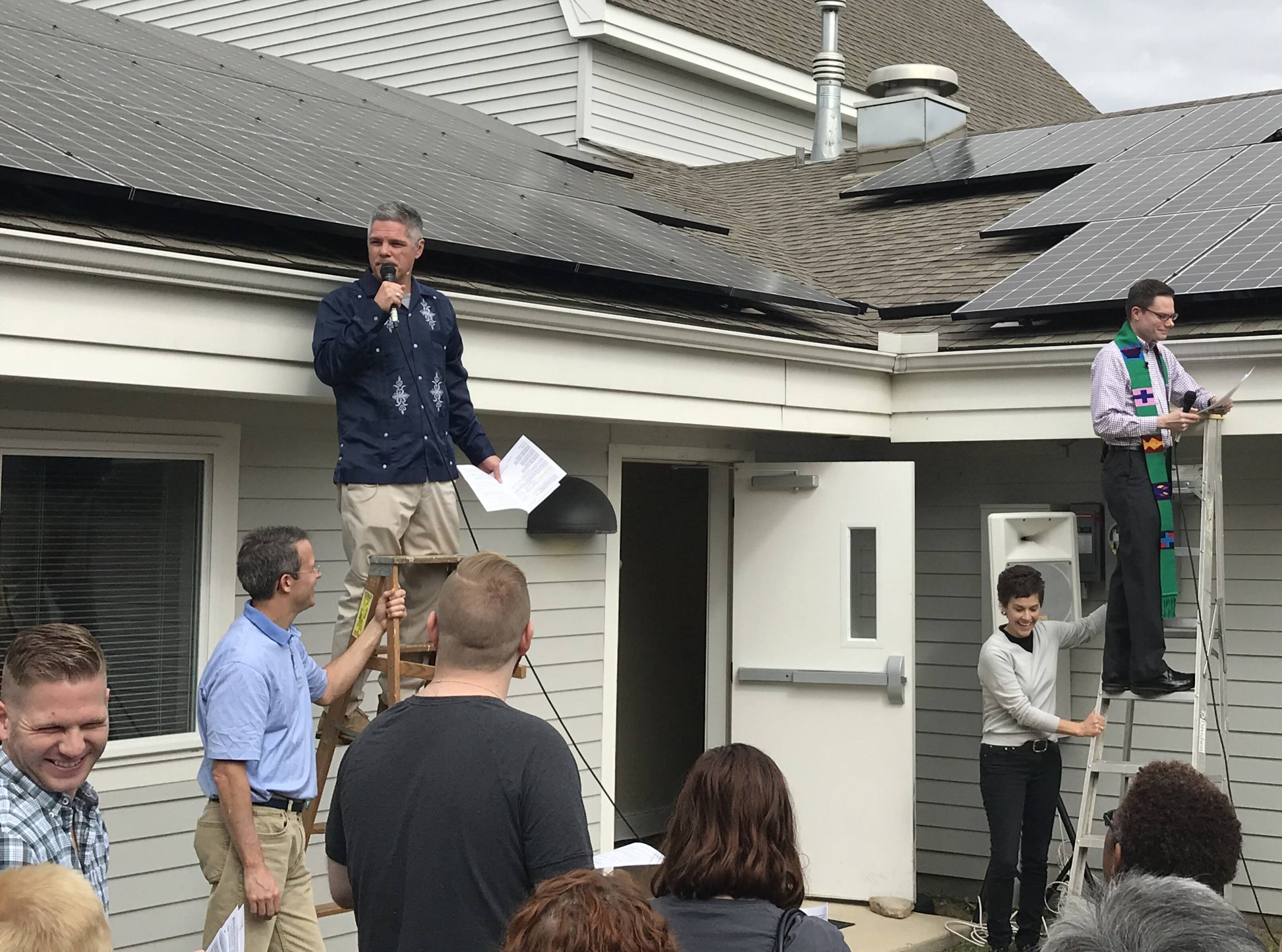 A relative of First Congregational members, a local environmentalist, heard the church was interested in solar. “It took that one person who was really dedicated to figure out how it would happen,” Mahlberg said. “He worked with the church trustees in figuring out how it would be more manageable financially.” He found affordable solar panels stored in an Idaho warehouse, the result of a national buyout of a Washington company. At the trustees’ invitation, he made a PowerPoint pitch to the congregation in April 2019.

“I was very open to the possibility that it wouldn’t catch fire,” Mahlberg said. “But people really got excited. Once it was clear the congregation had a lot of energy around it, it was a go. We took a leap of faith to buy those 60 solar panels and found a trucker who would ship them to us. A crew of church folks helped offload them into our basement, where they sat for months while we did the fundraising campaign.”

Lead gifts from a few generous donors meant the church could raise the rest at $155.67 per panel, attracting donations from members and others. Panel adopters ranged from a 12-step group to a Jewish couple. “People adopted a panel with their friends,” Mahlberg said. “Three college students who were graduating and had attended our church said, ‘We’ll throw in together as our parting gift.'” 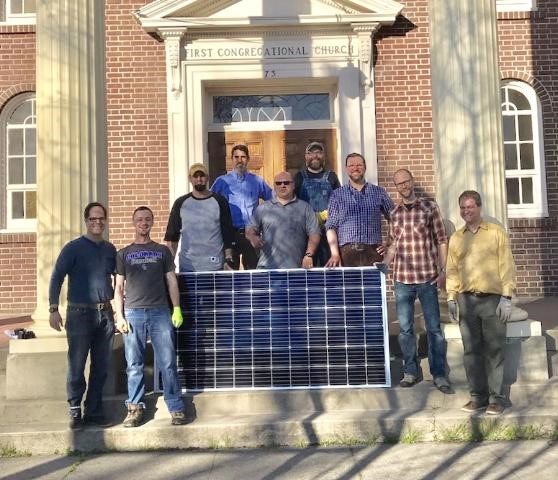 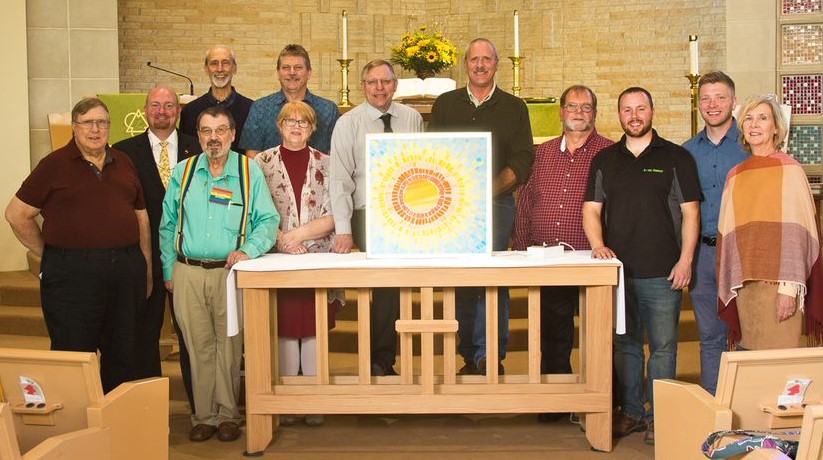 “We had a month or so where all my preaching was around the theme of creation care, and there’s just been a lot going on with the church,” Mahlberg said. An example: Earth Ministry, a Seattle-based nonprofit, “did a big session after church one Sunday on faith-based environmental stewardship.” And climate activism is now on the list of things the church is known for. A local hub of the youthful Sunrise Movement held its launch at the church. And when local organizers of the Sept. 20 nationwide climate strike reached out, Mahlberg connected them with a passionate First Congregational 6th-grader who wound up being a speaker.

“So it’s been a season of worship and teaching and learning and public witness around care for God’s creation and why as Christians we are convicted to be taking better care of the earth and to be finding sustainable ways of living with the world,””Mahlberg said. “The way it happened, the way we went about it, it helped build community as well. The spirit is at work.”

How tax credits can work

Even in a less-encouraging environment – say, Texas – churches can make solar work, said engineer Jon Maxwell, a member of the UCC Council for Climate Justice. He helped his church, Friends Congregational UCC in College Station, install a 20-kilowatt system two years ago. “There are absolutely no incentives for solar here, and no net metering,” he said. “The only things we have going in our favor are low cost of construction and lots of sunlight.” 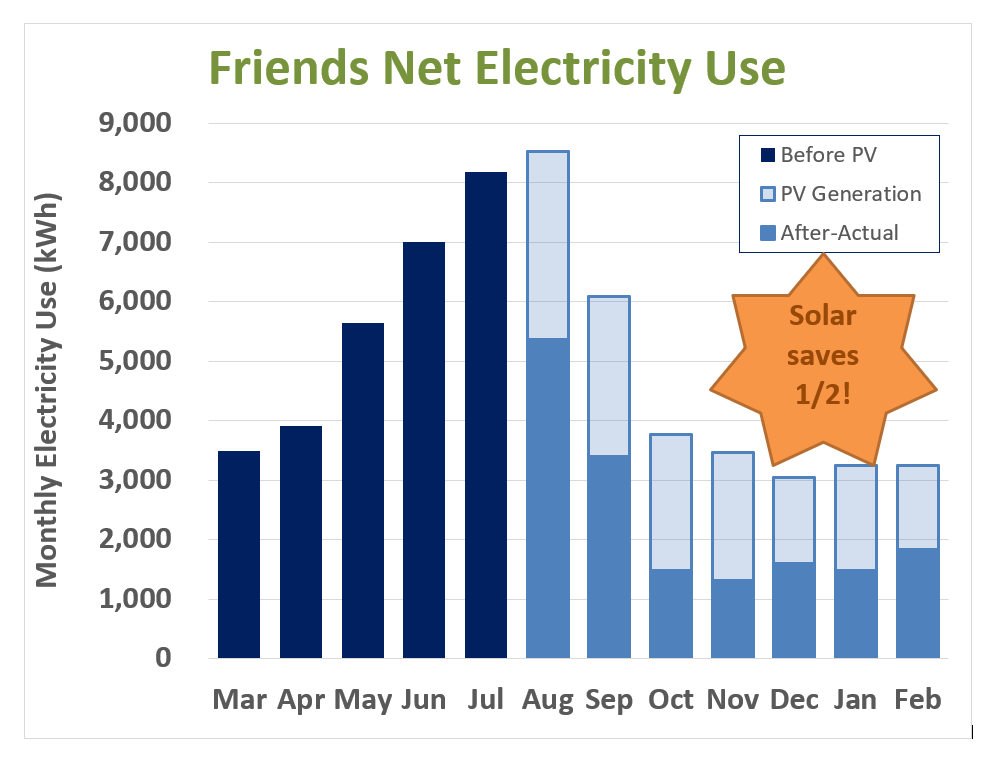 For the church’s Sustainability Committee, it was an easy sell to the congregation. “It’s a pretty progressive group,” he said. “Green’s good. They’re just mostly happy we’re polluting less.” And they’re saving money. The church’s annual electrical bill before solar was about $9,000 per year. Now it’s about $6,000.

But getting federal tax credits to make the system affordable was complicated, Maxwell said. It required a lawyer and six months of work to create a for-profit company. In this arrangement, called a power purchase agreement, the company is owned privately – in this case, by some church members – and sells electricity to the church. The company paid $45,000 for the panels and their installation, is collecting $13,000 in tax credits, and once the remainder is paid off through sales of electricity, the company has the option of giving the system to the church.

For churches considering solar, local utility companies are a good place to start, but help is also available from the wider United Church of Christ and ecumenical organizations.

One national expert offers this advice: Don’t overthink it. “For some reason, congregations seem to over-complicate the decision to go solar,” said Anya Schoolman, executive director of Solar United Neighbors, based in Washington, D.C. “It is a piece of equipment for your building that should in all situations help you save money – sometimes more or less, but solar now has a positive return on investment in all 50 states.

“When a church buys a new HVAC system, usually there isn’t a committee of people involved in learning the mechanics of HVACs. But with solar, people feel the need to go deep into the details. In reality, a congregation needs to pick an experienced installer with strong warranties for both labor and equipment. They need to decide how they want to pay for the system. They need to decide if they want to add storage for backup power – when the grid goes down. Most of the rest should be left to the professionals and not get bogged down in a congregational committee.”

“Don’t be shy about it,” Fairman said. “Let that light shine. Feel the spirit move you forward, and just do it.”