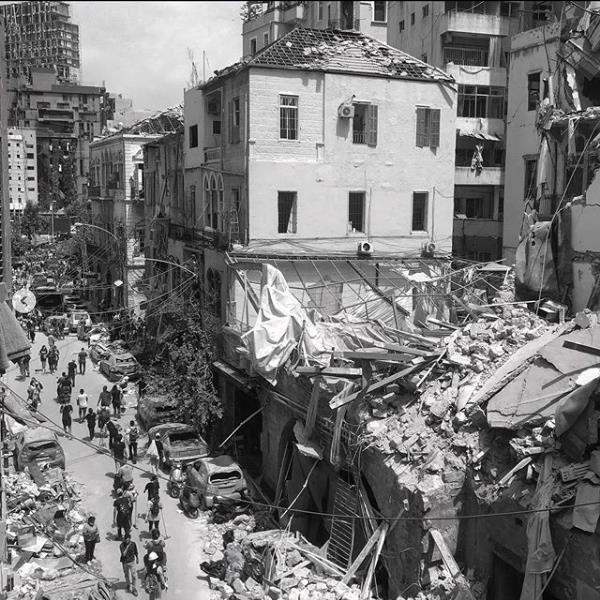 On August 4, 2020, shortly after 6 p.m. local time, the world was rocked for residents of Beirut, Lebanon. An explosion at the port – later revealed to be caused by 2,750 tons of ammonium nitrate being stored in a warehouse next to a grain silo – sent shockwaves across the city, shattering windows as far as 25 km away from the blast site.

Although the full extent of the destruction is still unknown, the devastation was immediately clear. Buildings at the port were flattened, and apartments in nearby popular and densely packed neighborhoods crumbled. Even in the Beirut suburbs, doors were blown in and windows were shattered. Current estimates from the Red Cross and Ministry of the Interior are that over 150 people were killed in the blast, with some 6,000 injured. Losses of the Beirut explosion are no less than $5 billion according to most conservative estimates.

This tragedy occurs amid political and social tension, the COVID-19 pandemic and Lebanon’s worst economic crisis in a century. The economic, health, and political crises in Lebanon have left the country under-resourced and less able to respond to other major disasters.

UCC Disaster Ministries has opened a giving opportunity to assist the people of Beirut, and has begun its response with a $10,000 contribution toward a multifaceted program to meet both physical and psychosocial needs created by the August 4 blast.

Forum for Development, Culture and Dialogue

That funding was requested by the Forum for Development, Culture and Dialogue (FDCD), a long-time Global Ministries partner, to help provide food, rent and other essentials to 200 families made homeless in this disaster. FDCD will also offer workshops for those who have experienced a great deal of trauma and distress as a result of the explosion, especially children, including those who have lost loved ones, whose homes were destroyed or who witnessed the explosion.

In addition to the response that FCDC is providing, the ACT Secretariat held a meeting on August 18, with its members and partner organizations.

“Of utmost concern was the ability to stand with the people who were harmed in this tragedy, especially while in their homes, and children,” said the Rev. Phyllis Richards, Acting Team Leader of the UCC’s Global H.O.P.E. Team.

“ACT members are raising funds that will be needed as this response is well outside of the Lebanon Government’s ability to respond,” she said. The response will include rebuilding of homes, houses and apartments, WASH and hygiene kits, gloves and masks, cash assistance, food, psycho-social protection, support to churches and Christians in the area, shelter, kitchen utilities, and aid to those made homeless by the explosion.

“Recovering from the explosions is going to be difficult because it is hampered by COVID-19,” Richards said. “But regardless of that, ACT partners are committed to standing with the people of Lebanon and are trying to help children go back to school, and adults rebuild and resume the activities of their businesses.”

Prefer to support the US Postal Service? Mail your check or money order made payable to the United Church of Christ to:

Write Beirut Explosion Response on your check or in an attached note!

A Boulder, Colo., congregation is moving beyond thoughts and prayers to address gun violence....

Hundreds of thousands fled lava and ash when Mount Nyiragongo volcano erupted May 22 in the...