Water and Justice: People Need Both 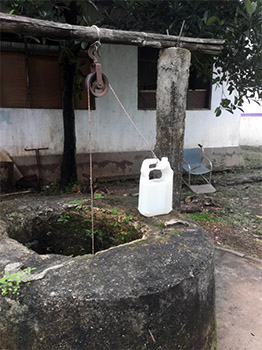 It rained almost constantly the last 10 or 12 days nearing the end of the rainy season in Timor. That has meant, among other things, that the municipal water supply resembled what you see when you look at a mud puddle. In fact, local authorities turned off the water supply. Why have a faucet if, what comes out is muddy?

Our Global Ministries’ co-workers along with the rest of the community spent the days that followed the heavy rains drawing and carrying water from their wells. What would happen if something like this happened in an equivalent sized American or Australian town? Most likely, people would FREAK OUT. Even conservatives would be banging down the doors of the mayor’s office demanding the authorities “do something about it!” Not in Timor. In Lospalos, most people don’t even have a faucet in their house, and those that do just go on with life. Some have a well they can use. If not, they load 5-liter “jerry cans” in a cart and push it to the nearest well, several times a day.

Amazing how most of us Americans take clean water and reliable government services for granted.

The Timorese people’s resiliency allows them to go on with life, seemingly no matter what happens. Such is the habit of people who’ve lived through wars, military occupation and a struggle for self-determination. They’re used to unpredictability. They’re accustomed to struggling for the basics. An uncertain future is the norm, not the exception. So flexibility and adaptation, not to mention a relaxed attitude and a sense of humor are survival skills.

Like clean water, what people in the world need is justice, not simply the ability to put up with hardship.

Join us in praying for people worldwide. Pray that limited access to clean water be replaced with available resources, and that the world becomes a just world for all.