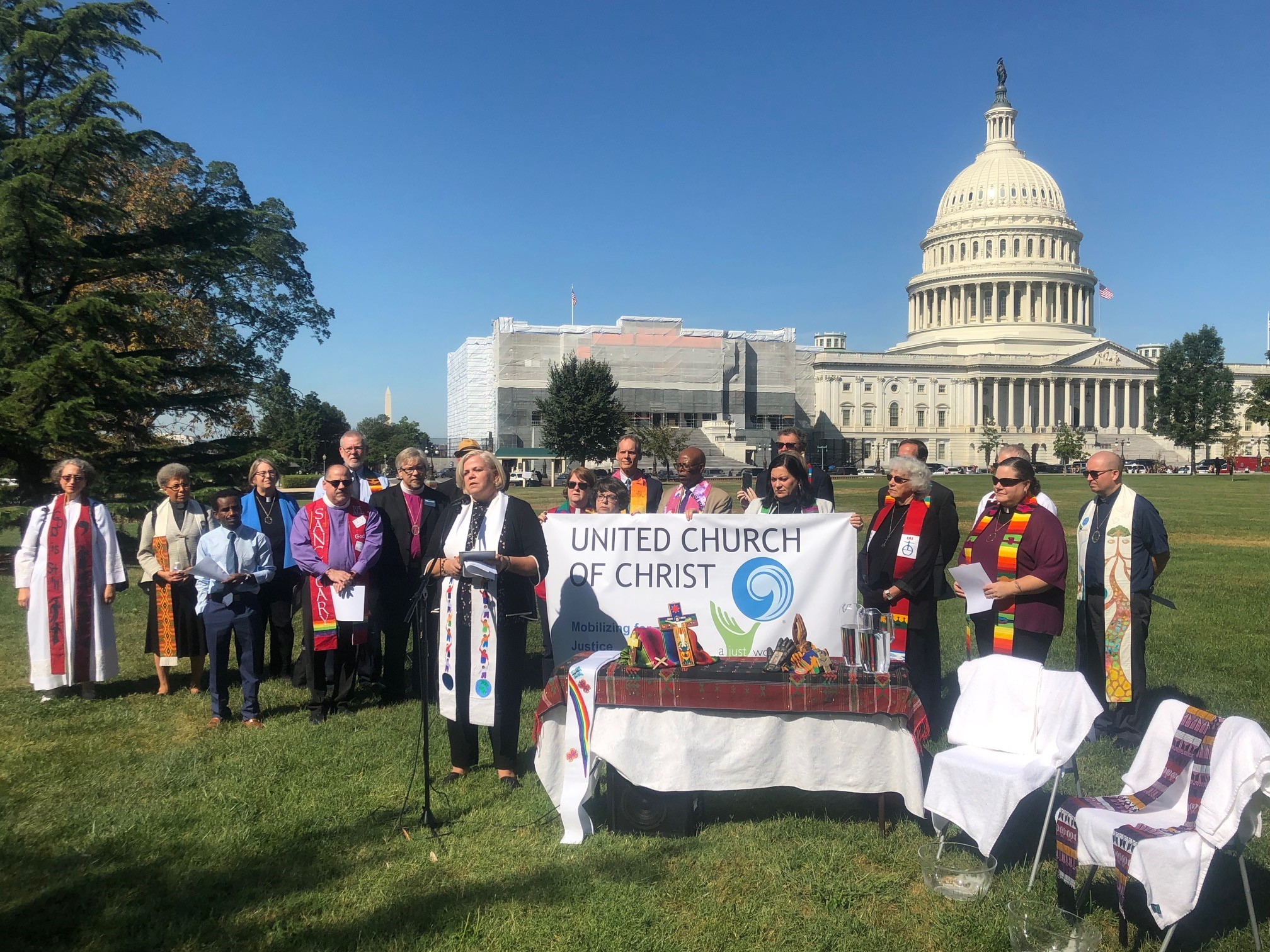 United Church of Christ regional leaders from across the country have come together for three days of action and advocacy in Washington, D.C., to tell United States legislators to defund hate and defend the rights of immigrants. The 22 Conference Ministers went to Capitol Hill Sept. 24-26 to speak in one voice, in a loud call for immigrant justice inside congressional offices and out on the Capitol lawn.

The work started Tuesday evening, Sept. 24, with a discussion and briefing from the UCC Justice and Witness team based in D.C., and a worship service to ground themselves spiritually for the work ahead.

“Worship this evening was powerful and put names to some of those who have lost their lives while in detention,” said the Rev. Bonnie Bates, Penn. Northeast Conference Minister. “As we sang the words from Tim Hughes’ song God of Justice – ‘We must go, live to feed the hungry, stand beside the broken, we must go. Stepping forward, keep us from just singing, move us into action, we must go’ – my heart was filled with the need to act and the need to be here in this place at this moment in time.” 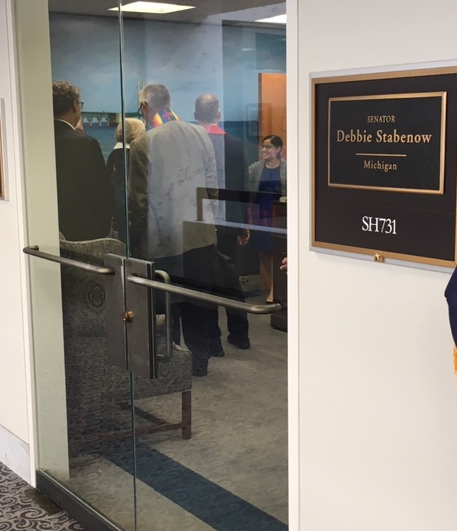 Wednesday morning, Sept. 25, the Conference Ministers decided to divide and conquer, breaking into smaller teams by geography to better manage visits with lawmakers on Capitol Hill. Six teams, each with several visits scheduled, spent much of the day Wednesday advocating for more humane immigration policies.

The Rev. Ginny Brown Daniel carried testimonies from four local churches in the Missouri Mid-South Conference that offer sanctuary and support to immigrant families. As part of its immigrant justice ministry, Christ Church UCC in Maplewood, Mo., has housed a father of five young U.S. citizens for almost two years.

Between visits to legislators, the Conference Ministers gathered on the Capitol lawn in a visible call on Congress to rethink budget appropriations for fiscal year 2020. They demanded more money be spent on community building and humanitarian assistance, and less on the detention and deportation of migrants.

“Twenty-seven thousand unaccompanied children, 195,040 people traveling as families and 78,532 people traveling alone – 300,572 human beings, people, men, women and children – crossed our Conference’s borders this fiscal year,” Lyons said, citing numbers from U.S. Customs and Border Patrol. “United Church of Christ congregations in collaboration and partnership with our ecumenical and interfaith partners have offered them an extravagant ‘Bienvenido,’ provided case management services, medical care, food, clothing, shelter and as much hope as we can muster to as many of them as we possibly could. And Immigrations and Customs Enforcement and Border Patrol have incarcerated every one of them at some point in their journey.” 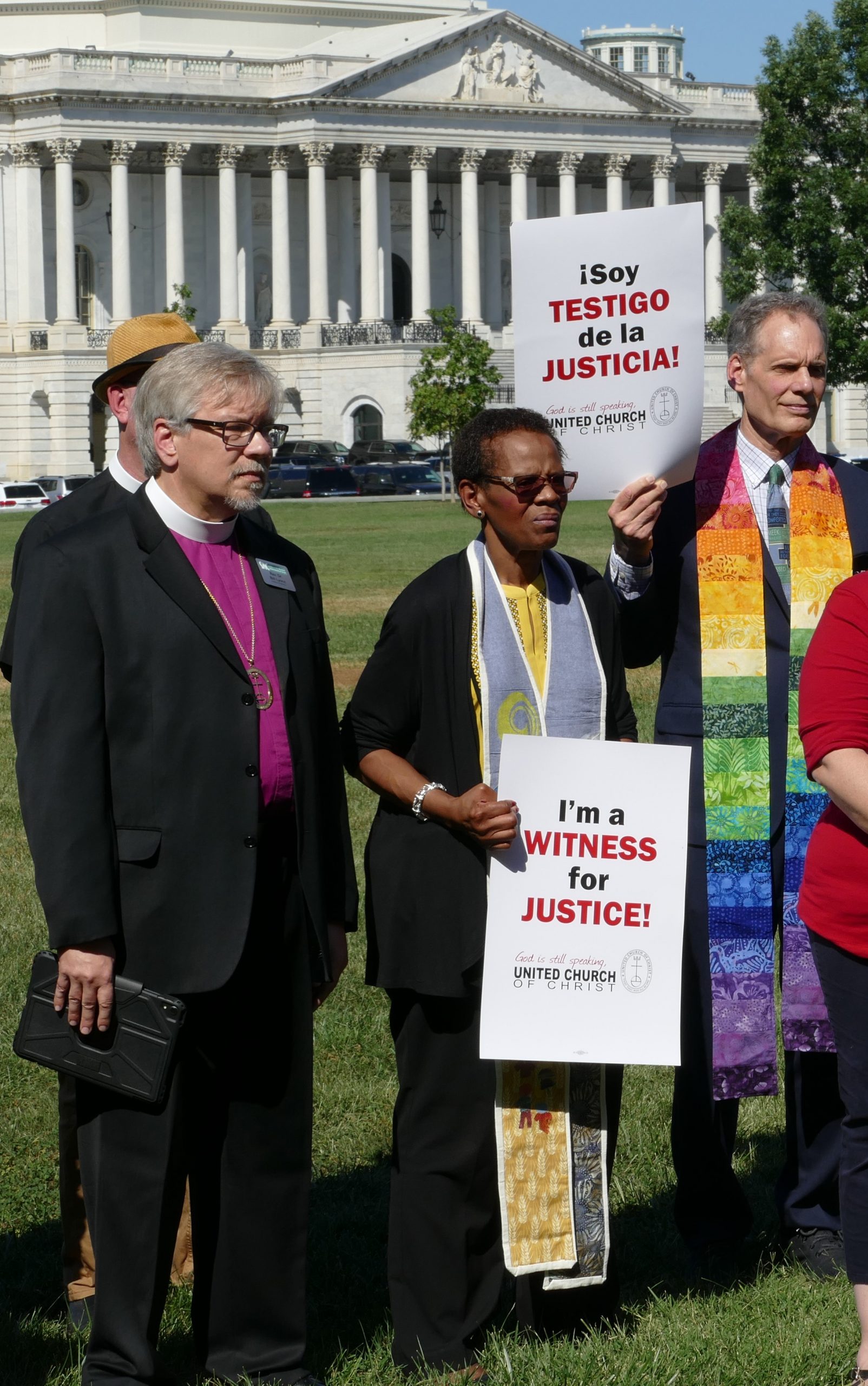 Lyons talked about listening to a “dreamer” – a recipient of Deferred Action for Childhood Arrivals, deported and staying in a shelter in Mexico – explain how his family was torn apart. The young man didn’t speak Spanish, and as the family’s sole wage earner, his deportation put his children in jeopardy. They were removed from their mother’s custody and placed in foster care.

“We don’t need more ICE or Border Patrol agents,” Lyons said. “We don’t need more walls. We don’t need more detention beds. We need resources for community-based, non-restrictive, family case management programs that build trust between non-profit providers and participants. We need Congress to include iron-clad ‘report language’ in the DHS appropriations bill that spells out exactly how the Department of Homeland Security can and cannot spend the money allocated to them, putting those dollars out of the reach of the President. And we need Congress to restore funding to humanitarian aid programs in Central America’s northern triangle.”

Ferew Haile, an asylee from Ethiopia and director of advocacy for a local non-profit, the Briggs Center for Faith in Action, spoke on behalf of others like him that who have no voice. He talked about the struggles of migrating to a place where you don’t know anybody, where language is a barrier and daily life is a struggle.

“The divisiveness and the hate that is being propagated as we speak today by the current administration is indescribable,” he said, noting that people who are “legally entitled to leave their country for persecution are being demonized as we speak.” A human rights lawyer in his country, Haile said he is living testimony that connecting with faith members and local organizations that provide a loving and welcoming environment can be life changing.

Edith Guffey, the Kansas-Oklahoma Conference Minister, called for an end to immigration policies that support white supremacy, which she said is deeply woven into the fabric of our nation. “What we are seeing on immigration today isn’t new. It’s part of the pattern of marginalization of people of color in this country – put the ugly pieces of the puzzle together,” she said, citing land taken from Native Americans, boarding schools used to separate Native children from their families, enslavement of Africans, slave auctions and Japanese internment camps. “Now, the constant barrage and marginalization of migrants seeking a refuge here. The intentional characterization of migrants as criminals, shady characters, dehumanizes people and makes our neighbors easy targets and objects of scorn and fear.” 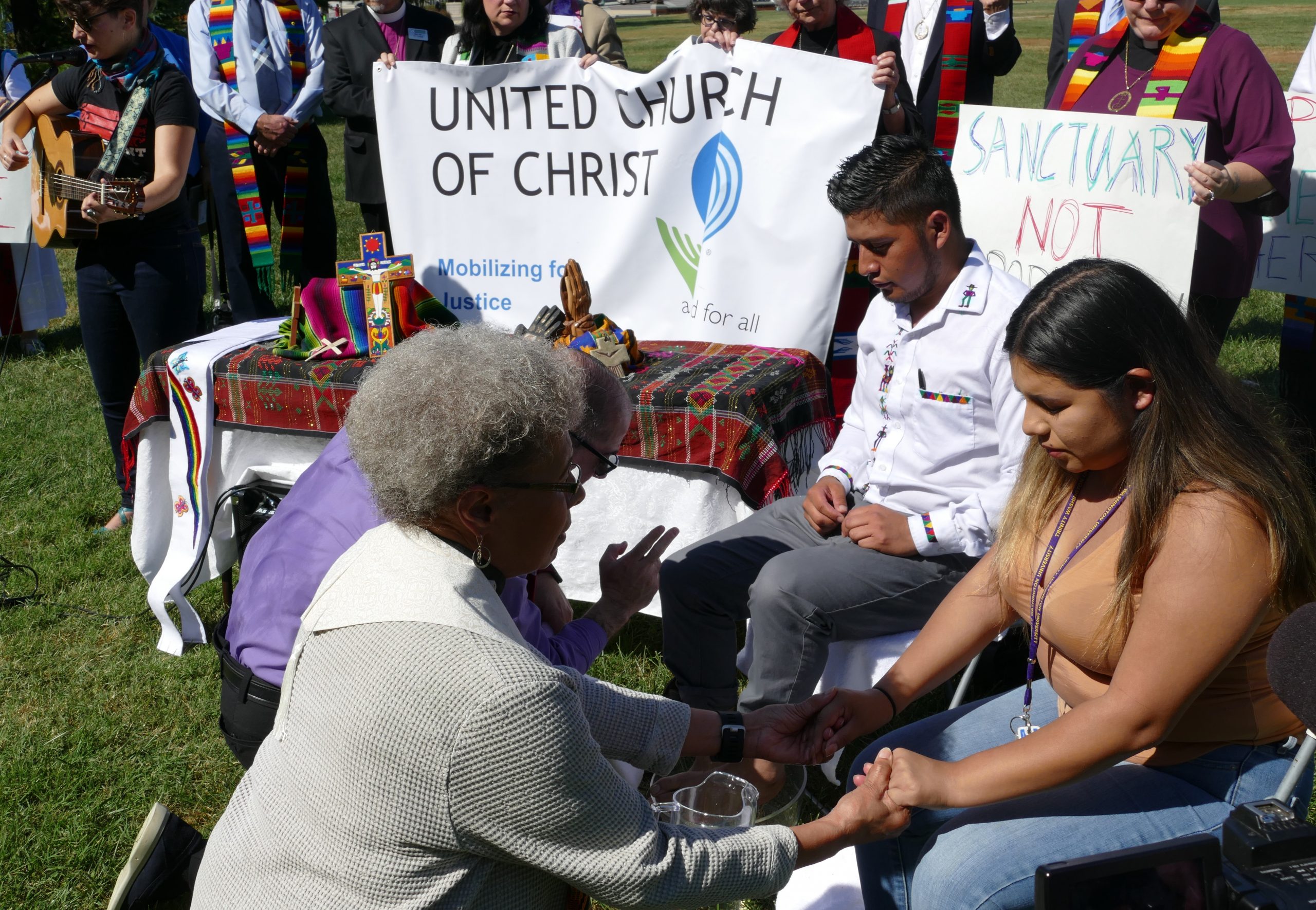 Saying “we are living witnesses to what is happening to migrants today,” Guffey urged Congress to break the current cycle, make a course correction and remember one simple biblical verse: “Do unto others as you would have them do unto you.”

The UCC faith leaders then embraced immigrants who have felt persecuted by U.S. policies in a symbolic foot-washing ceremony.

“In our Christian tradition in the United Church of Christ, we come as people who are willing to humble ourselves,” said the Rev. Justo González II, Illinois Conference interim conference minister. “This is about us recognizing the human dignity, the value and the sacredness of our immigrant sisters and brothers … that their journey is holy and sacred, and we honor you for being who you are. For allowing us to be accountable to God and to you.”

Tomas Geronimo, a Mayan from Guatemala, was one of the people blessed during the foot-washing ceremony. He found refuge and community at the Centreville (Va.) Immigration Forum, founded by Wellspring UCC. He spoke of more than 36 years of civil war and genocide that forced him to migrate to the U.S. to find a safer place to live. “We have brought our vision of freedom here and continue to fight for liberty,” he said. “We are not criminals, we are hard-working people. We come to live peacefully, to have healthy community. We demand respect, we demand justice. We are human.”