Ever since severe floods in 2016 washed away their small bridge across the creek in front of their home, an older West Virginia couple used an extension ladder to get out to the grocery store and doctor’s office. Today, the couple can cross the creek safely on a simple, sturdy new bridge – the 50th completed in West Virginia in just over two years in an innovative project of voluntary agencies including the United Church of Christ.  . 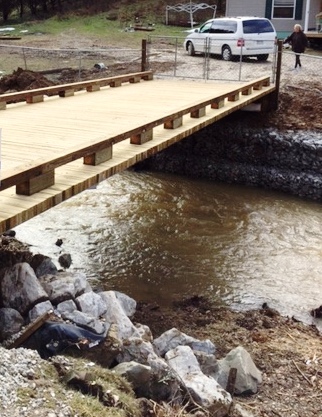 That said, the Bridge Project has succeeded thanks to collaboration among faith groups, county and state government and local private individuals,” said Jim Ditzler, Disaster Coordinator for the UCC’s Ohio Conference, which includes West Virginia. “The success is contagious.”

The UCC’s National Disaster Ministries and Ohio Conference were involved in the origin of the Bridge Project and provided some funding.

Ditzler, who serves on the Bridge Project Committee, said, “Hundreds of small creeks thread through the hills and valleys of West Virginia. The steepness of the adjoining mountains leads to sudden severe flash flooding in these creeks.

“People establish their homes in the only available spaces, frequently on the other side of the creek from the road. Many of their private bridges are homemade and not strong enough to withstand the sudden rush of water.”

“The loss of a bridge is a devastating loss in maintaining their way of life,” Ditzler said. “To restore them means restoring a lifeline to residents and eliminating the necessity of long detours or dangerous crossings.”

“I lack the words to describe the spiritual energy that I felt during this dedication,” Ditzler said. “Starting from ‘can’t be done’ to number 50 in less than two years is quite an achievement. Just shows what can happen when we all work together. Actually, 56 bridges have been completed to date. I am very proud to be the UCC representative.”

West Virginia VOAD’s Executive Director Jenny Gannaway said the goal is to build another 140 bridges from mostly the 2016 flood and another dozen or so from last summer’s flooding in the Northern Panhandle.

“The Ohio Conference will continue to support the Bridge Project by funding when possible and recruiting volunteers for hands-on help. There is a genuine need here,” Ditzler said. “The Bridge Project represents opportunities to serve in different ways such as committee membership, recruiting additional volunteers, possible material resources and funding.”

Refugees like Sandra are making the best of a difficult time by caring for others. They made...

Here are some recent international grants approved by UCC Disaster Ministries: Here are some...