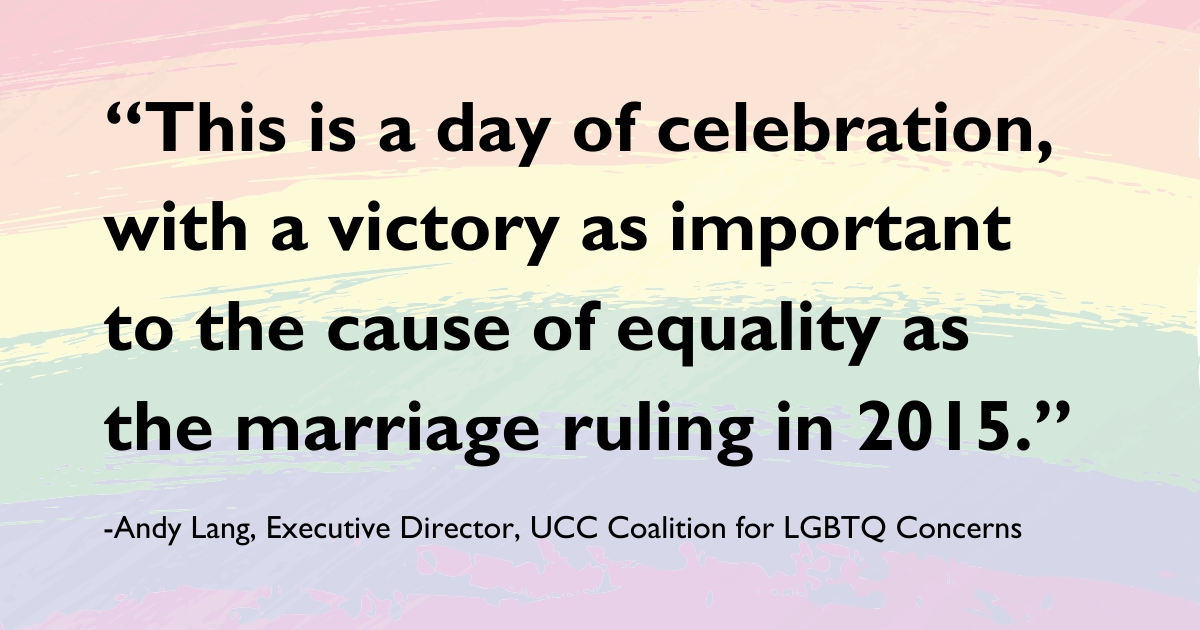 The United Church of Christ is celebrating a landmark decision from the U.S. Supreme Court Monday, June 15, that protects gay and transgender workers from discrimination in the workplace. By a vote of 6-3, the justices ruled that an existing federal law, the Civil Rights Act of 1964, forbids job discrimination on the basis of sexual orientation or transgender status.

The Rev. Mike Schuenemeyer, executive for health and wholeness advocacy, is applauding this major victory for the LGBTQ+ community from a more conservative court than the one which upheld marriage equality in 2015.

“The U.S. Supreme Court’s decision to ban employment discrimination against people who are ‘gay or transgender’ is a long-awaited and major ruling for justice,” Schuenemeyer said, pointing out that the UCC has been advocating for workplace equality for LGBTQ+ people since 1969.

“Among the United Church of Christ’s earliest calls for justice for LGBTQ+ people were calls to eliminate discrimination in employment,” he continued, citing the UCC General Synod’s 1969 “Resolution on Homosexuals and the Law” and its 1975 “Pronouncement-Civil Liberties without Discrimination”. “These statements recognized that every person as a child God has God-given worth and dignity that human judgment cannot set aside and that discrimination is an attack against that worth and dignity. While we continue to celebrate the marriage equality decision for those who wish to marry, this decision benefits every LGBTQ+ person.”

The decision, based on Title VII of the Civil Rights Act, was written by Justice Neil Gorsuch, President Trump’s first Supreme Court appointee.

“An employer who fires an individual for being homosexual or transgender fires that person for traits or actions it would not have questioned in members of a different sex,” Gorsuch wrote. “Sex plays a necessary and undisguisable role in the decision, exactly what Title VII forbids.”

“Those who adopted the Civil Rights Act might not have anticipated their work would lead to this particular result,” he wrote, adding, “But the limits of the drafters’ imagination supply no reason to ignore the law’s demands. … Only the written word is the law, and all persons are entitled to its benefit.”

Twenty-three states and the District of Columbia have laws prohibiting job discrimination based on sexual orientation or gender identity. In two other states (Michigan and Pennsylvania), existing sex-discrimination laws have been interpreted by state civil right agencies to cover sexual orientation and gender identity. Those laws remain in force, but this ruling provides similar protection for LGBTQ employees in the rest of the country under federal law.

“This is a day of celebration, with a victory as important to the cause of equality as the marriage ruling in 2015,” said Andy Lang, executive director of the UCC Coalition for LGBTQ Concerns. “Thanks to this decision, LGBTQ communities can now breathe the air of freedom in 25 states where there was no statewide legal protection against job discrimination.”

As UCC General Counsel Heather Kimmel is celebrating “this human rights victory” which affirms that discrimination based on an individual’s gender orientation or sexual identity has always been prohibited by Title VII of the Civil Rights Act, she continues to be vigilant to the possibility that some businesses could claim to be exempt from the law under the Religious Freedom Restoration Act.

“The Court left open the possibility of addressing the intersection of Title VII and RFRA in appropriate future cases,” she said. “We will continue to monitor cases that argue for religious exemptions to the Civil Rights Act.”

“There’s more work to be done, especially given the White House rule change, announced June 12, allowing healthcare discrimination. We also have much to do to address racial justice,” Schuenemeyer said, “but I celebrate today’s ruling for justice that bans LGBTQ+ employment discrimination.”

“Our joy is tempered by the grief we feel over the events of the past several weeks, which have reminded us of the persistence of racial injustice in our country–injustice that threatens LGBTQ people of color as well,” Lang said. “But today’s Supreme Court’s action renews our hope that, as Dr. Martin Luther King Jr. said, ‘the arch of moral universe is long, but it bends towards justice.’”