The World that Could Be: Militarism and Our National Priorities

Our nation has been at war for 17 years. Yet, most days, we live, act, and vote as if we are not. Most days, we do not consider the human and financial cost of the ongoing conflicts our nation is engaged in, in Afghanistan, Iraq, and 15 other countries. We do not see the faces of the 15,000 troops deployed in Afghanistan on our news. We do not read in our newspapers the names of the 370,000 lives lost from war on all sides of these conflicts, or the many more lives lost indirectly from war’s impact on economies leading to poverty and environmental devastation. 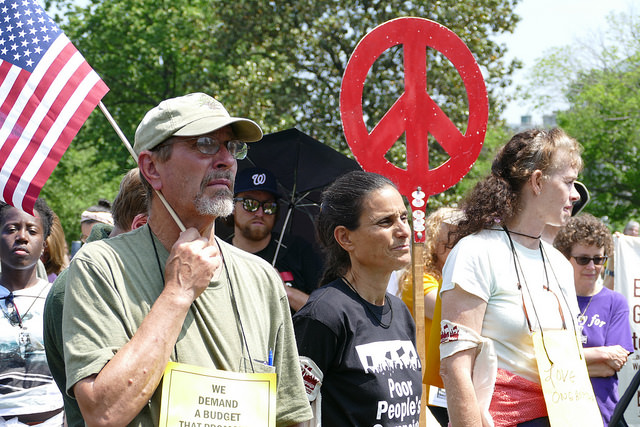 Our refusal to face the real cost of war is a reflection of, at best, the numbness we experience after more than a decade of war; or, at worst, the sign of “spiritual death” that has finally taken hold as a result of our nation’s immoral priorities. This condition is what the Rev. Dr. Martin Luther King Jr. warned us of over 50 years ago in his “Beyond Vietnam” speech at Riverside Church: “A nation that continues year after year to spend more money on military defense than on programs of social uplift is approaching spiritual death.”

As a nation, we have spent over $5.6 trillion on war since 2001, and will spend over $700 billion more next year on the Pentagon and related war costs. How else could that money be used? The National Priorities Project has a list of possible trade-offs that would be valuable investments in education, health, and anti-poverty programs. The deeper issue is, however, how these budget allocations reflect our values as a nation, how they point to our misguided “America First” policy, belief in redemptive violence and the racism, xenophobia, and classism that shapes policies which take from the poor and benefit defense contractors and corporate interests. After 50 years, it is easy to lose hope that a different way is possible, that a revolution of values will ever come about. We can lose sight of the world that could be.

Thankfully, there is a movement happening which is helping articulate just what such a different world could look like. The new “Poor People’s Campaign” is renewing Dr. King’s movement from the 60’s, and focusing on its inherent intersectionality, or what Rev. William has called “fusion politics.” This fusion movement on Tuesday gathered hundreds outside the Capitol to lift a moral voice on issues of “Militarism, War Economy, Veterans, Education and Our National Priorities.” Speakers called on us to transform our ‘war’ economy into a ‘peace’ economy, and challenged the immorality of profiting from war. One veteran spoke of his path to the military through the “poverty draft” and the continued reality of poverty for many veterans after their service.

Too often in our history, the anti-war movement and those causes working for justice for the poor, or the environment, or LGBTQ rights, or any number of issues have remained separate. The Poor People’s Campaign is a call and reminder that our causes are the same. Justice and peace, as we have articulated in the United Church of Christ, are connected. Just Peace remains a vision for a world that could be, a world in which all are included, all are liberated, and together we build a Just World for All.