Thirty years ago this summer, Indigenous mothers testified at a national United Church of Christ women’s meeting about the harm caused by stereotypes of American Indians used in everything from pictures on soda pop labels to names of sports teams.

The result was a resolution – first adopted by what was then known as the Coordinating Center for Women in Church and Society, then by the 1991 General Synod – calling for an end to the “negative stereotyping of Native Americans” in sports and commerce.

This week, after years of activism, local and national UCC leaders are watching developments that could be major steps toward that goal.

The National Football League team in Washington, D.C., confirmed on Monday, July 13, that it will abandon its name, widely regarded as a racial slur, and its accompanying logo.

Earlier news reports that the move was likely – and that it was being forced by pressure from the team’s corporate sponsors – were followed by similar news from Cleveland. There, the Major League Baseball team announced in a Twitter post that it would open a community engagement process “to determine the best path forward with regards to our team name.” The team had dropped its “Chief Wahoo” logo after the 2018 season.

A long time in coming

Indigenous activists have expressed caution. Neither of the two teams has yet fully committed to eliminating Native American  language and imagery, and the outcomes of both of their processes remain to be seen.

In the nation’s capital, local UCC leaders said a change was long overdue.

The Rev. Graylan Hagler, pastor of Plymouth Congregational UCC in Washington, recalled a 2013 clergy meeting that he and Oneida Indian Nation leaders convened at the church to strategize. “We had been fighting to #ChangeTheName long before then, and indigenous people had been fighting for much longer,” Hagler said in July 13 Facebook post. “Oppressors are hard of hearing. It should not have taken so long!” 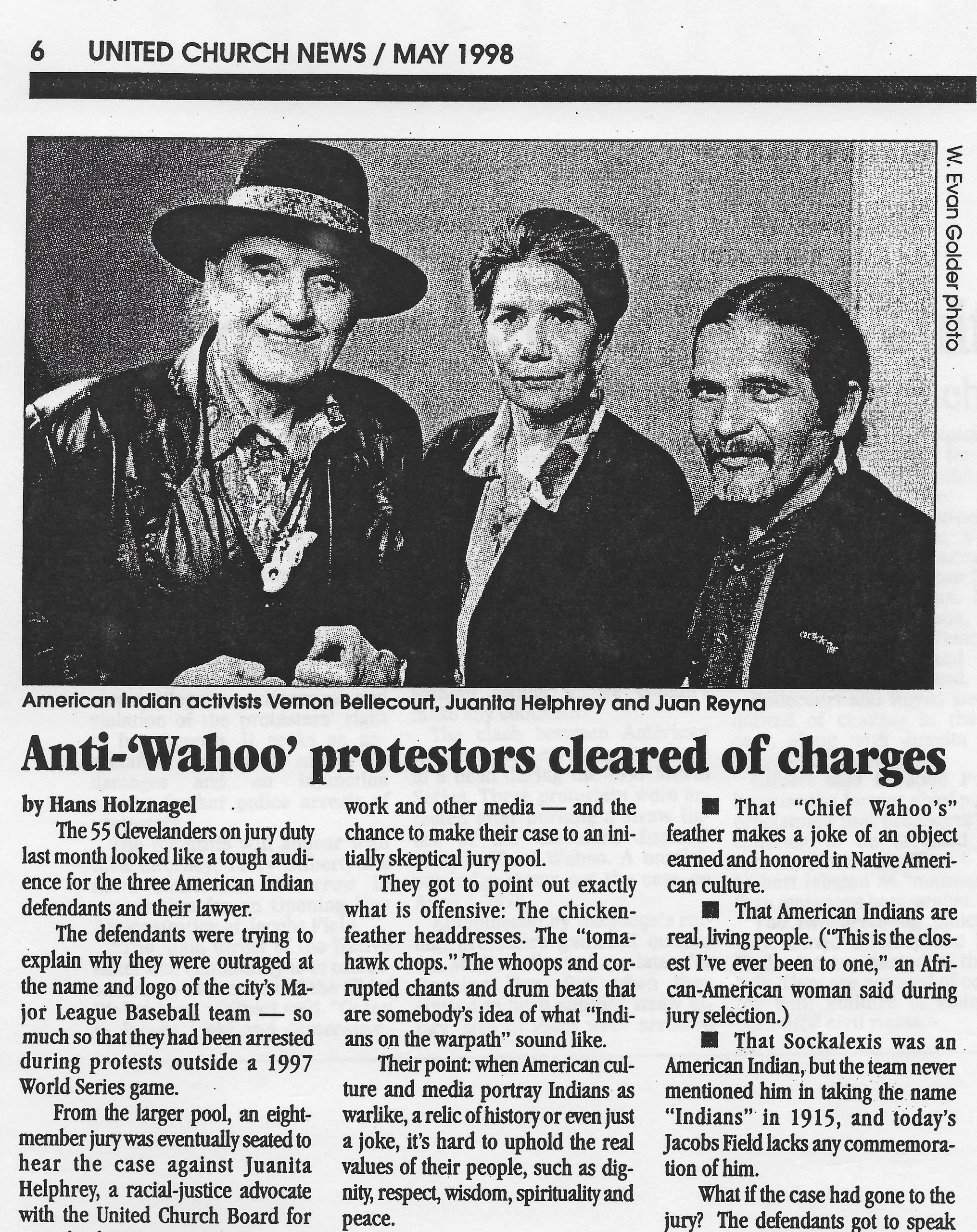 “European Americans have a long history of ‘playing Indian’ that dates back to the colonial period,” said Zillah Jackson Wesley, a UCC member and clinical social worker in D.C. who serves as moderator of the denomination’s Council for Racial and Ethnic Ministries. “… The stereotyping of Native Americans must be understood in the context of history which includes conquest, forced relocation and organized efforts to eradicate native cultures. Since the first Europeans landed on the shores of this country, native peoples have suffered under a staggering array of stereotypes, misconceptions and caricatures. The time is here to end all such negative action.”

National church leaders welcomed what they see  as motion in the right direction – and they, too, acknowledge d the length of the fight.

In 1991, UCC leaders met with officials of the Cleveland baseball  team but received no commitments to consider changes in either its name or logo. Since then, UCC members have joined  Indigenous organizations in pregame demonstrations outside the Cleveland ballpark. The United Church Board for Homeland Ministries, a predecessor of today’s Justice and Local Church Ministries, was involved in court cases in the 1990s to secure free-speech rights for demonstrators there. At the 2015 General Synod, held in Cleveland, delegates passed a resolution specifically addressing the D.C. team name. They confronted the Cleveland baseball team, marching to the local ballpark to chant, pray and deliver some 3,000 signatures calling for the removal of the “Chief Wahoo” logo.

“For several decades, the United Church of Christ has provided public and political dissent to the mischaracterization of native people from whom this land was stolen,” said the Rev. Traci Blackmon, associate general minister. “Sport mascots and caricatures that dismiss the lethal impact of European immigrants’ colonization of the Americas, and portray indigenous images for entertainment, perpetuate violence. The removal of such symbols is a beginning.”

“Along with the name changes needs to be an apology to Native Americans for the use of stereotypes and racist slurs used to promote professional sports teams with the ultimate aim of wealth generation,” said the Rev. Velda Love, minister for racial justice. 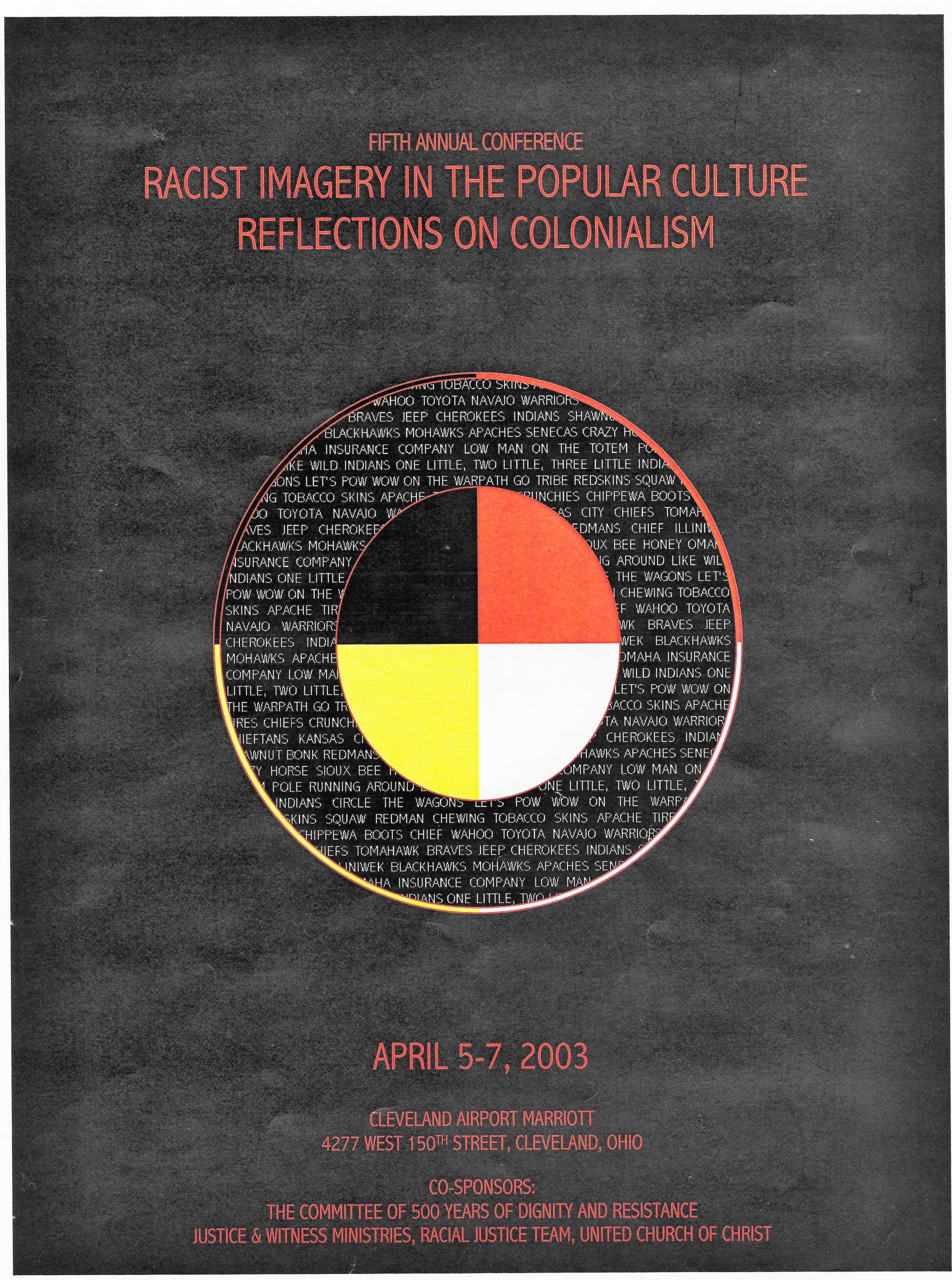 The Rev. John Dorhauer, general minister and president, said he wished a past national staff colleague, the late Juanita Helphrey, “was here to celebrate with us.” A member of the Mandan, Hidatsa and Arikara Nation, Helphrey played a lead role in fighting negative stereotyping as a racial-justice staff member of the American Missionary Association division of UCBHM in the 1990s and early 2000s – and as a regular fixture at Cleveland demonstrations.

“I remember decades ago coming to Cleveland as a local pastor and working with Juanita Helphrey to boycott the Cleveland ‘Chief Wahoo’ logo,” Dorhauer said. “Her work on this was fierce, brave and tireless. We don’t arrive at moments like this without the courage and creative energy of many leaders. The United Church of Christ has been a consistent voice calling for the abolishment of these racist and offensive portrayals of native peoples.

“I wasn’t sure I would live to see this – and am filled with joy and gratitude at the bending of the arc of history again toward justice. Our vision of building a just world for all as a gospel mandate is lived out in moments like this. The work continues – for there are more barriers to cross and there is much more work to be done. But we also pause today and remember those like Juanita who led helped make this happen, and we celebrate every victory along the way.”

“May we continue to examine the use of images, and the naming of institutions, in light of the pain they cause and the false historical narratives they perpetuate,” Blackmon said. “May we reimagine a world where such cultural appropriation is appalling to us all.”