Our Faith, Our Vote efforts in Wisconsin help vulnerable young people exercise their right to vote 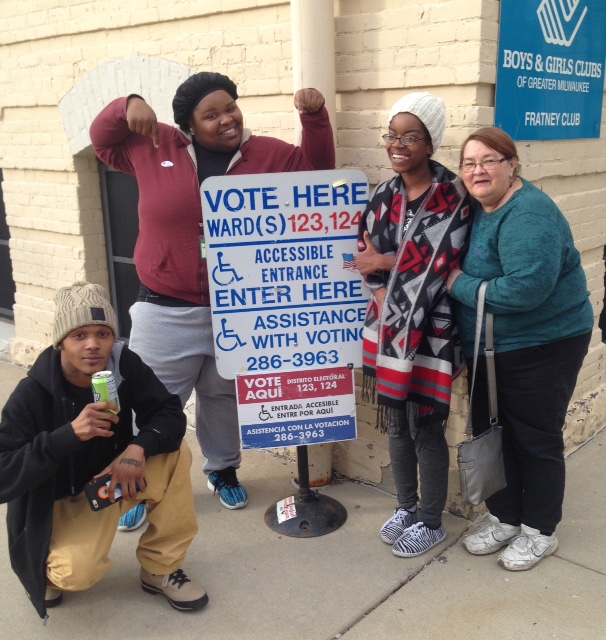 A United Church of Christ congregation in Milwaukee is working to make sure that the right to vote is available to all young people who are interested, no matter what their circumstances.

“Our democracy depends of course on the inclusion of all voices, even those we might strongly disagree with. But my own motivation for our get out the vote efforts comes even more from what I’ve learned from vulnerable youth and young adults,” said the Rev. Andrew Warner, pastor of Plymouth Church UCC. “Our at-risk young people often never get a voice, either in their families or in their schools or in our communities.”

So Plymouth Church is focusing efforts leading up to Election Day to ensure homeless or at-risk youth know their rights, the issues involved, and have a way to cast their ballots.

The Church, in partnership with an organization called Pathfinders, is preparing those young people for November 6. Once they are ready to vote, volunteers from the congregation plan to drive them to the polls.

“We helped to found Pathfinders in the late 1960’s and reengaged this ministry in 2008,” Warner said. The social service agency, to which Plymouth sends 10% of its income, serves homeless or vulnerable young people 12-25. “Most are African-American, many LGBTQ, with experiences of homelessness, trafficking, or other trauma.”

“Often times the youth we serve can feel hopeless in their worldviews because their experiences of instability already come with violence, risks, harm and other factors that contribute to their lives in unsafe ways,” said DeShanda Williams, director of Runaway, Homeless Youth (RHY) Services at Pathfinders. “It is important that our youth know they have a voice, their voice matters, that they are seen and they are heard.”

“We largely serve people of color in our programs, and historically, people of color had to fight for the right to vote,” Williams continued. “Given this is something that was not naturally a right due to race, which currently, race continues to play a factor in the quality of life our youth may be facing, we want to continue to build their world and normalize for them so they function and operate in the world with power if they so choose. Here we will present for them some of those choices!”

“Pathfinders works to empower young people to make better choices,” Warner said. “I’ve come to see the work of empowering people to exercise agency over their own lives (and bodies) essential for healing and moving beyond traumatic experiences.”

The church will be hosting an educational event and meal with Pathfinders on November 2, so the young people interested in exercising their civil rights can find out more about the process of voting (while homeless), and what it is they will be asked to decide.

In 2016, Plymouth also worked with Pathfinders in the same type of voter education and mobilization. Those efforts included connecting vulnerable and homeless youth with their elected officials, followed by a rally before the election. Church members then provided rides on to the polls Election Day, where Warner said some young people voted for the first time.

“Whether it is five youth or 30,” Williams said, “we feel planting seeds, eliminating barriers and introducing youth to voting or giving them the information, transportation, laymen terms education and exposure to some adult responsibilities contributes to healthy, productive, positive decision-making and experiences.”

“At a time when we are seeing escalating attacks on voting rights and increased voter suppression efforts, advocacy to insure that the voices of the most marginalized are heard are more important than ever,” said Sandy Sorensen, director of the UCC Washington, D.C. office. “The election engagement of Plymouth UCC is exciting and hopeful – it will make a difference in the life of the community and in the individual lives of young people.”

“While it matters to our democracy that everyone votes,” Warner said, “I’ve come to see helping young people cast their first vote as important to their own positive development. Issues of homeless/vulnerable youth, racial equity, voting access all come together for me in this get out the vote effort with Pathfinders.”

Voting is a natural extension of faithful action. Join the UCC Our Faith, Our Vote campaign and learn more about how your congregation can get involved.