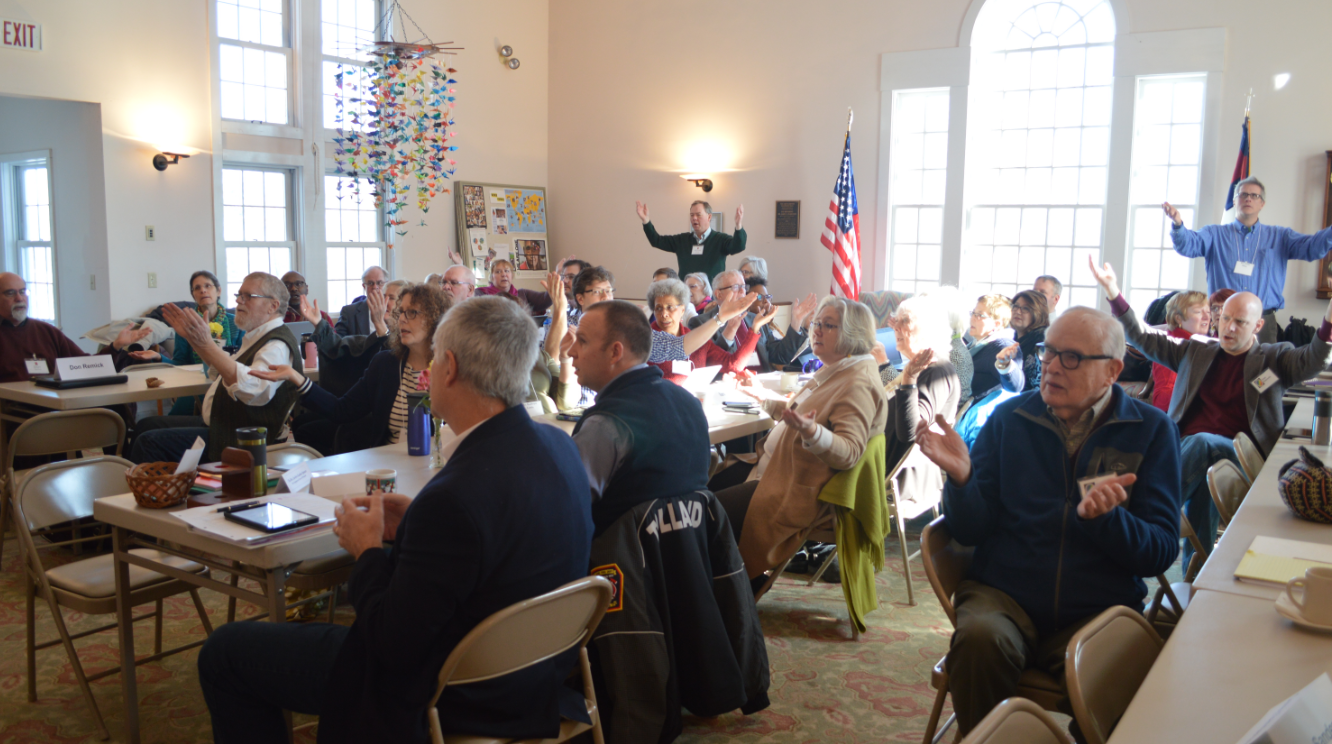 After spending two hours going over documents detailing the future operation of a new, unified conference, the Connecticut, Massachusetts and Rhode Island Conference Boards of Directors enthusiastically gave their stamp of approval to moving forward with the process.

The three Boards voted to affirm “in all material respects” the proposed covenant of purpose, articles of incorporation and bylaws for the new conference on Saturday, Feb. 3. They also suggested some relatively minor modifications, and plan to vote on revised documents in separate meetings by mid-March. The documents will be made public no later than mid-March, in preparation for the June 15-16 joint Annual Meeting, where delegates will be asked to approve them.

Board members at times struggled to balance the need for documents that on the one hand satisfy the legal requirements of forming a new, non-profit entity, but on the other hand express the desire for covenant among the three conferences.

Massachusetts Conference Board member the Rev. Michael McSherry, who was a corporate lawyer before becoming a minister, likened the process of drafting these documents to “honoring Caesar and honoring God.”

“That’s part of what we’re doing – honoring the attorneys general of our three states and honoring our religious tradition,” said McSherry, who served on the task team that worked with an attorney to develop the documents. “We recognize that the language and the architecture don’t look a lot like what we’re used to.”

But, McSherry said, state officials will pay close attention to how the conferences move forward in this process, because it is their job to ensure that money given to the conferences as public charities is spent properly, honoring the intent of the original donors. That is why the proposal being developed calls for creating a new nonprofit corporation of which the three existing conferences are “members.” Each conference will continue to have its own board, but some members of those boards will also serve on the board of the new entity. Some board members chafed at the proposal, expressing frustration that it falls short of bringing the conferences fully “together, as one.”

But the members of the task team that worked on the proposal said it is a necessary step, and said the documents have been carefully prepared so as to neither require nor preclude the conferences from fully merging into one entity some time in the future.

“This takes us up to the edge, but not quite to, a full merger,” McSherry said. “If we do get to the point of wanting to merge the three historical conferences … then we’ll have the track record of having collaborated for a few years first.”

Dawn Hammond, Massachusetts Associate Conference Minister for Policy and Finance, added: “the important thing is that we’re acting missionally together. We can decide later whether we want to jump through the legal hoops to join legally.”

A provision of the proposed bylaws allows for other organizations or ministries to join the new entity as “associate members” alongside the three southern New England conferences. This was the result of a provision in the resolution approved by annual meeting delegates last year, which said the proposal for a new conference “may also provide a common table for other faith communities, both historic and those coming into being, to share in common vision.”

The bylaws for the new entity allow for acceptance of associate members who “want to align with and act in common cause with the purpose” of the new conference.

“This little paragraph is unprecedented in American denominational history,” said Massachusetts Conference Minister and President the Rev. Dr. Jim Antal. McSherry added that this document is inviting other groups to “join our energy and our spirit.”

“This is one the most exciting things to come out of this process,” said Connecticut Conference Board Member David Lincicome.

The three Boards also briefly discussed what the process would be for naming the new conference, and agreed that the decision should not come from them, but should come from the wider membership of the three conferences. Together, As One, will continue to be used as a placeholder name while that conversation goes forward.

Tiffany Vail is the Associate Conference Minister for Communications of the Connecticut, Massachusetts and Rhode Island Conferences United Church of Christ.