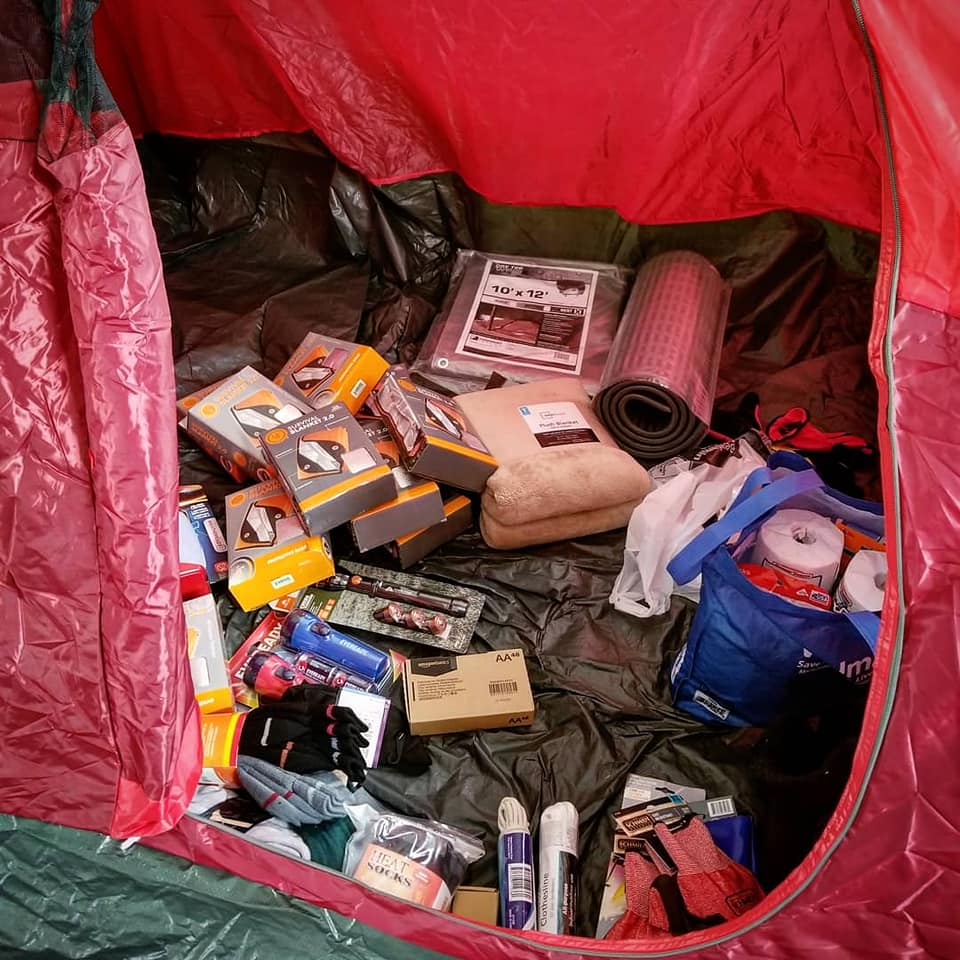 As the Polar Vortex brings Artic air and frigid, dangerously cold temperatures into the Midwest and up into New England, a New Hampshire congregation is showing love to neighbors affected by the weather in a number of different ways.

On January 17, the Rev. Eliza Tweedy set up a four-man tent in front of the sanctuary at First Church Congregational UCC in Rochester, N.H., to gather items for the people in the community who call that type of shelter home. Then she posted a picture of it on the church Facebook page. Her text invited friends to add to the collection  — Sleeping bags, tents, flashlights, lanterns, socks, gloves, hats and other stuff — and included the church address. She hoped to fill the tent by the first of February, so the goods could be distributed when they are needed most.

Then a snowstorm hit, and cancelled Sunday worship.

“I thought that a frigid week after a cancelled Sunday service would mean no change in the tent this week,” Tweedy wrote. “BUT I WAS WRONG!! Between local folks bringing stuff during the week, and distant folks making use of our Amazon list, the tent is filling up.” She arrived at church Monday to boxes from Amazon in her office, and far more stuff in the tent than expected.

Photos of the tent’s growing collection have been documenting the collection’s progress — But this direct service ministry began long before the Facebook post.

“It has long been known that Rochester has a community of folks who live in tents or makeshift shelters out of the way,” Tweedy said. As part of a local initiative looking to address the issue, the group turned to the people directly affected for long term and short term solutions.

“We don’t pretend to know what people need. We invited some of the folks who are directly impacted to be part of our discernment,” she continued. “It became clear that the short-short-term needs — the ones we can fill right this minute — are for the folks in tents or sleeping in their cars. They are the ones who gave us a list of needs, and we are following their lead.”

The church, after creating these relationships, turned to allies near and far to help address this often invisible issue. 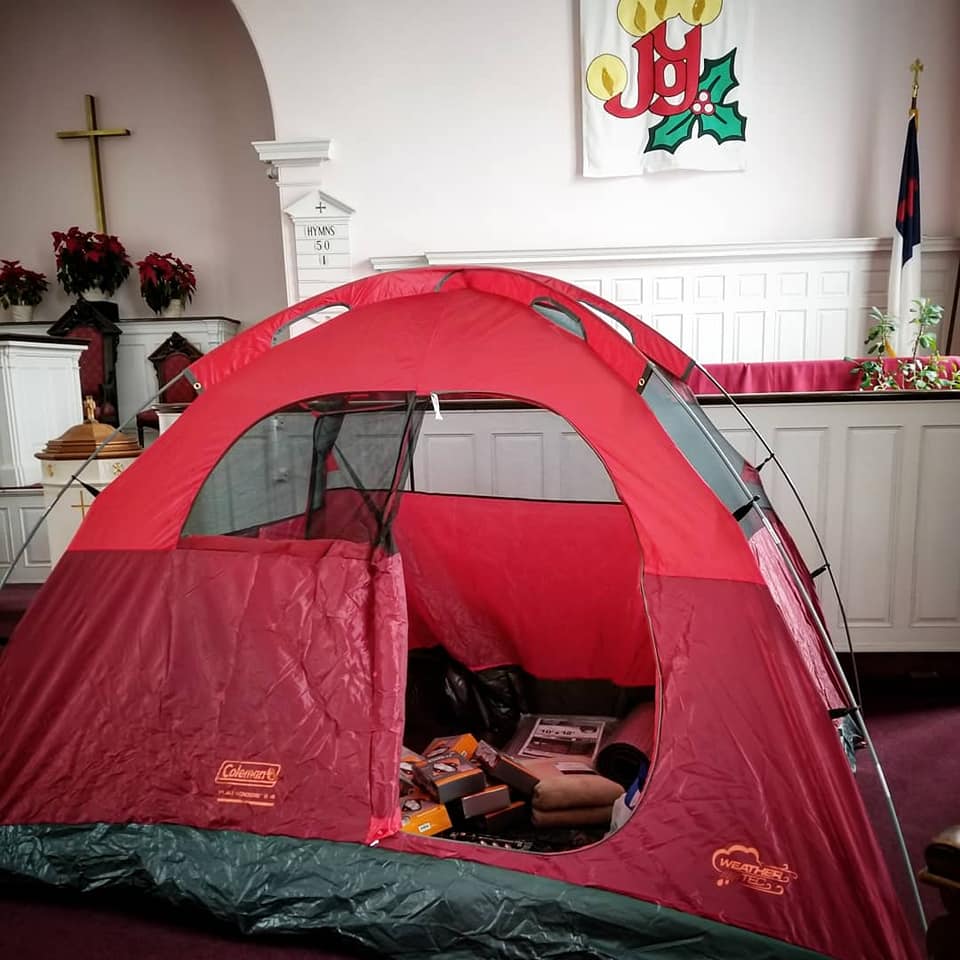 The Rev. Dave Sigmund, the UCC’s 3 Great Loves ambassador, and husband Jay Greaves were moved to participate. They joined the drive to fill the tent from their home in Long Beach, Calif.

“This resonated with several of her friends on Facebook, including me,” Sigmund said. “Jay and I shipped items purchased on Amazon immediately after reading her post. Winter’s tight grip is touching so many. Especially those most vulnerable. What a wonderful testimony of sharing God’s love and living out our love of neighbor and 3 Great Loves.”

Tweedy said she would love to thank donors using the gift list on Amazon, but the boxes of goods are  coming in without names. “We have no idea who just sent that box of blankets. It feels like they are just falling out of that great cloud of witnesses. That’s a special thing.”

More amazing, she said, are the feedback and the conversations this drive is sparking. People are asking, ‘Why these things?’ The congregation is using the questions to shift the conversation — so all can see each person in the made image of God.

“One of the elements of faith that First Church takes very seriously is the commandment to love our neighbor as ourselves. I have long been impressed by my congregation’s ability to see folks that have often been deemed ‘other’ and welcome them as kindred in Christ,” Tweedy  said. “Our care of those neighbors who are experiencing homelessness is a natural result of the intentional practice of seeing the image of God in each person around us, and striving to live together as one body in Christ.”

“I think that many of us have to work to undo an idea of charity that is patronizing and dehumanizing,” she continued. “Love should center the person receiving; love should be measured less by intent, and more by impact. We try to live our love by hearing the stories of our neighbors — listening closely to what they are telling us, what they need, how we can support them — even when doing so forces us to change our perceptions.”

First Church is working a local agency, the Tri-City Co-Op, on distributing the tent collection. People in the Rochester, Somersworth and Dover areas who are experiencing struggles, with mental health, substance use disorder, or housing insecurity, gather there for peer support and assistance. The donated supplies and weather appropriate gear will be offered for the taking at the Co-Op.

“We are planning to bless all that we have received in worship on February 3, and to distribute what we have at that point,” Tweedy said. “The need is now, while it’s cold and icy and wet. We all really want to see that tent full, but we want it for the sake of those who will receive the donations, not for the sake of seeing our tent full.”

The pastor noted this ministry became more important as that the number of community members experiencing homelessness grows. Tweedy said that over the past two years, the homeless rate in the county has gone up 45%. There are two shelters in the county for women and families, none for single men, and all are frequently at capacity. But she emphasized, all people, no matter their circumstances, want to live in community — shelters don’t allow spouses. People can’t take their dogs.

“We try to love our neighbors as we hope that we ourselves would be loved; by honoring their humanity and dignity,” Tweedy said. “Eventually, we hope this means helping them find more permanent and safer shelter. For right now, loving means meeting people where they are, without judgement or shame, and treating them as we would each other, with grace and respect.

“In creating relationships, people will tell you exactly what is going on, at that moment you earn their trust. Being a good ally is so important. Lift up your voice for those who don’t have them.” 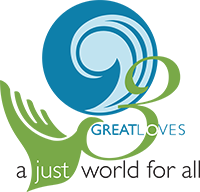