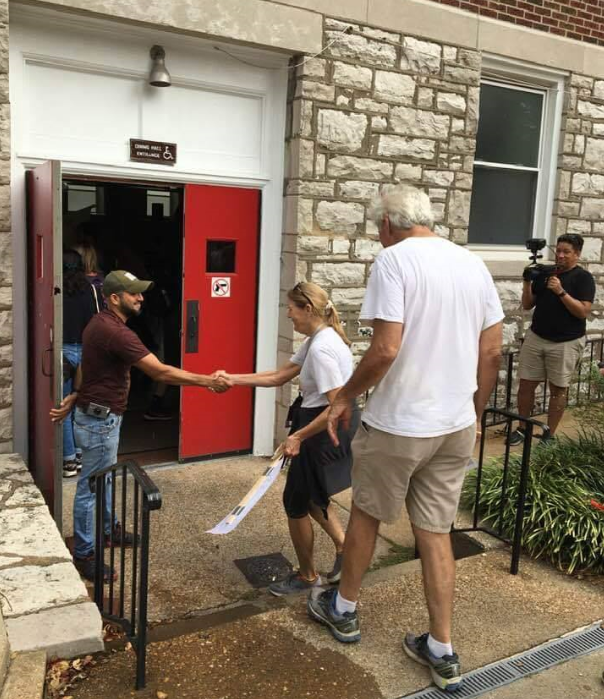 Christ Church United Church of Christ marked a bittersweet milestone with Alex Garcia and his family the weekend of Sept. 21. The father of five, an immigrant from Honduras, has lived at the church in Maplewood, Mo., for over two years. In sanctuary, separated from his family—his wife and children are all U.S. citizens—he’s been protected from deportation.

The congregation marked that two-year anniversary with a seven-mile pilgrimage from the St. Louis office of Immigration and Customs Enforcement to the church, where Garcia greeted supporters at the door.

“We shared a meal with Alex, and promises of our continuing commitment to walk with this family, who have become our friends and family,” said Jan Roddy, a member of the Christ Church Immigration and Sanctuary team, who a few days later, as part of the congregation’s delegation to Washington, D.C., advocated on Alex’s behalf with lawmakers.

“Until a legislative path to citizenship is created for the 11 million who live without papers and have made their homes, lives and families in the U.S., sanctuary serves as an option against immediate deportation while other legal remedies are sought,” Roddy said. “It is one way to keep families like the Garcia’s together, though it is not an easy option.”

‘Individuals in sanctuary are not free’

Living in a basement apartment that he helped convert, Garcia, a tradesman, works around the church building where he has taken shelter as his family and his allies advocate for a path to citizenship. The time away from his family hasn’t been easy. Until recently his wife Carleen and his three youngest children, ages 5 to 14, lived three hours away in Poplar Bluff.

“Individuals in sanctuary are not free,” Roddy said. “They are essentially in prison in a church. It is better than the alternative but creates tremendous stress and emotional scars on family members, and children in particular.”

“It’s absolutely affecting them all,” she continued, speaking of Garcia’s daughter and four sons. “They struggled. These kids, you can see in their drawings, hear it when you are talking to them. One of his sons, his thinking is that the people or the pastor are making his dad stay at church and won’t let him come home. Sanctuary makes no sense to them.” 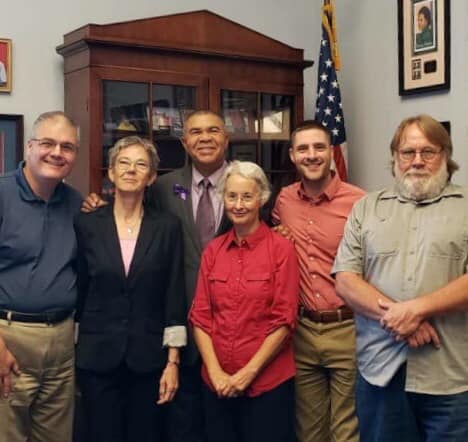 Christ Church is also supporting Garcia in a legal strategy that he and several other people in sanctuary are pursuing with the assistance of a national advocacy group, the Sanctuary Collective. They seek to have “private bills” introduced in Congress, individually, on behalf of 15 people.

The Collective is made up of immigrants in sanctuary, immigrant organizers, attorneys, and allies in faith communities spanning seven states—Texas, Missouri, North Carolina, Ohio, Pennsylvania, Colorado, and Virginia.

“Rep. William ‘Lacy’ Clay Jr. submitted a private bill on Alex’s behalf in July,” Roddy said. “We now are waiting for him to take the next steps to ensure that the bill is heard in committee. That’s our next big ask. We are writing and calling this week to advocate for that next step.”

Alex’s Bill, H.R. 3750, would stop Garcia’s deportation and grant him permanent residency status, so he can be reunited with his family with a pathway to citizenship.

As Roddy said, “What everybody wants is the larger immigration reform. These bills signal that needs to happen. There aren’t any remedies available for these people. Sanctuary right now is the only thing we have, but it doesn’t stop the constant fear.”

Supporters say the private bills could also help keep someone from being deported. As Roddy noted, “Historically once these bills are introduced, the bills prompt ICE to offer people a stay of removal somewhere through the process.”

Visits, letters to members of Congress 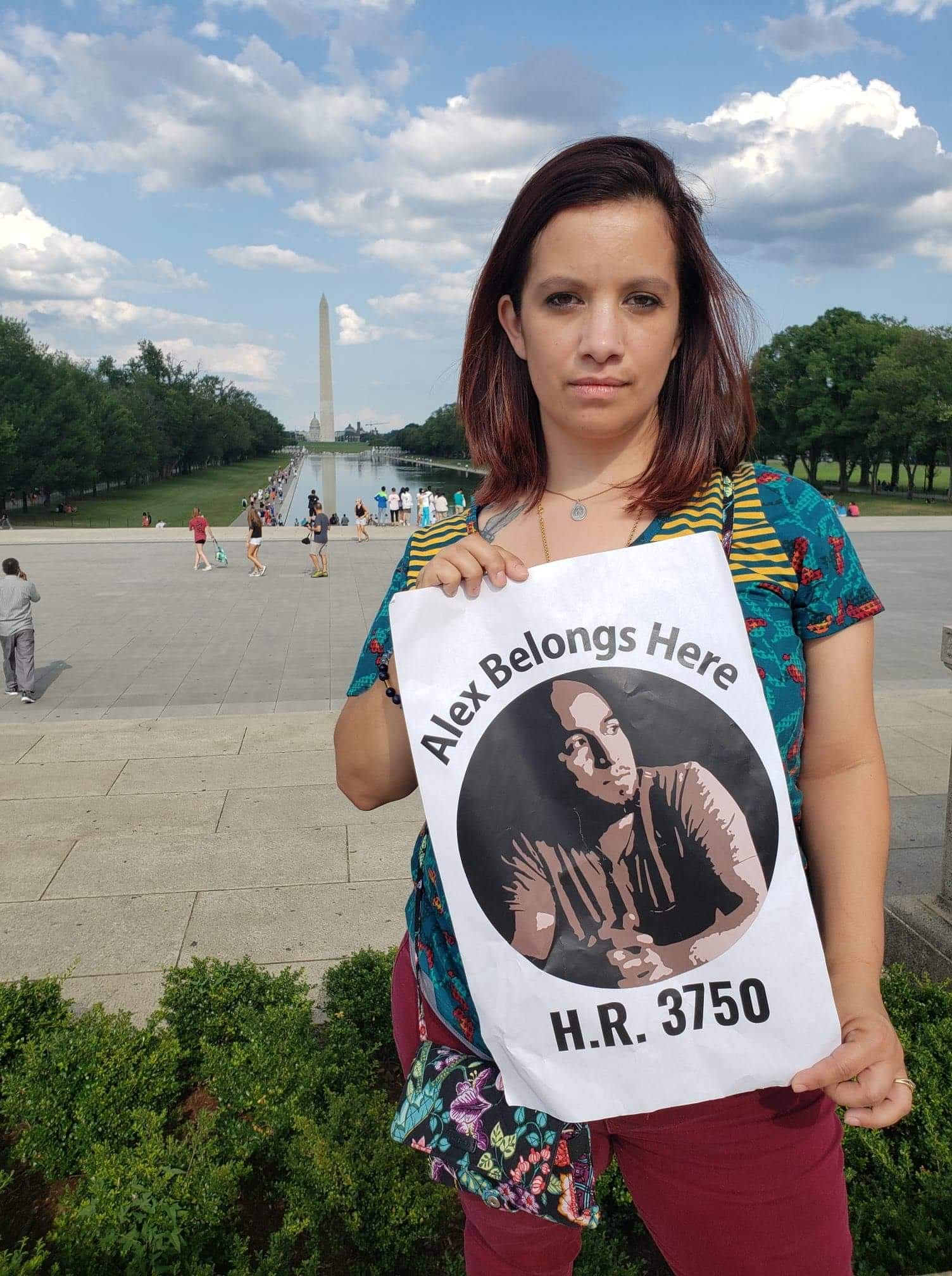 The Collective has seen five private bills proposed. Three were submitted the last week of September as the result of its advocacy work in D.C., in a trip that dovetailed with a mission trip for immigration justice by 22 UCC Conference Ministers.

The Christ Church group, along with other members of the Collective, met with the staff of over a dozen representatives and senators on Sept. 25 and 26 and brought information to the offices of many more lawmakers. The most important meeting for the Missouri church team was with Clay to ask him to push Alex’s bill through the committee and hearing process. The group also met with Missouri Sen. Roy Blunt. The Rev. Ginny Brown Daniel, Missouri Mid-South Conference Minister, took Garcia’s case to Rep. Ann Wagner of the St. Louis area.

Garcia’s wife, Carleen, who has visited D.C. a couple times on his behalf, has also written letters to members of Congress in support of H.R. 3750.

“My husband is one of over 50 immigrants forced to live in sanctuary right now,” Carleen Garcia wrote to them. “Introducing a private bill for each individual would be one concrete action your office can take to be a visible ally to the millions of immigrants, their families and friends that are facing deportation. Many of these individuals were forced to go into sanctuary after their stays of removal were not renewed when ICE arbitrarily changed enforcement priorities. Private bills will help save our American families and demonstrate your commitment to keep families together.” 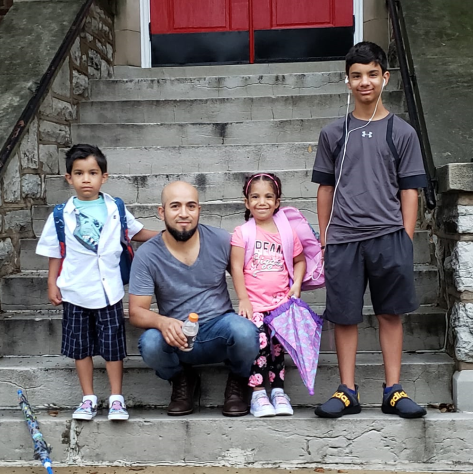 To give Garcia more time with his family, the people of Christ Church moved his wife and three children into the church parsonage that the congregation was previously renting out. (His two older sons from a previous relationship live with their mom in Poplar Bluff.)

“When Alex’s wife and five children had been commuting three hours one way each weekend to be with him, we provided money for gasoline and food for the weekends, as well as emergency car repair,” wrote Pastor Rebecca Turner in a letter Brown Daniel delivered to lawmakers. “In March, the family moved to Maplewood to be closer. We assisted with the move, provided a house adjacent to the church, helped with school enrollment, helped with expenses until Carly found a job, paid the utilities and purchased school supplies. We also helped pay the transportation for Carly to go to D.C. to advocate for her husband in Congress.”

The García’s can now spend more time as a family. They and Christ Church get support from other faith communities and immigration reform advocates in the region. But Roddy worries about how their current circumstances will affect the rest of their lives.

“Alex doesn’t say much. He just wants to be able to support his family. He hates that, he tears up, when he talks about not being able to do that,” she said. “This (separation) is during a main part of their life – building a family and a future. Alex is losing prime earning years. We can’t know how this is setting them back in terms of ever getting their financial footing again. The damage will be irreparable. We can only hope and pray they will be together in the end.”