Migrant families at border have nowhere to go 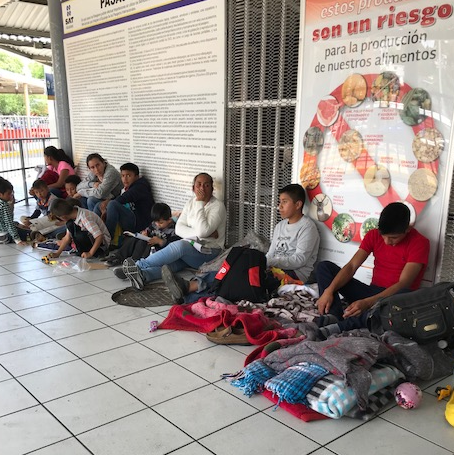 The Rev. Randy Mayer made the familiar trip to the Comedor near the Mexico/US border last week. The pastor of Church of the Good Shepherd, UCC in Sahuarita, Ariz., and his congregants are among church volunteers at the Comedor, a small hillside compound where Jesuits, Sisters of the Holy Eucharist, Samaritans from Green Valley, Sahuarita and Tucson, No More Deaths members, and helpers from both sides of the border provide migrants with morning and evening meals, clothing, medical care, phone calls, legal advice, and psychological services. There Guatemalan, Mexican, Honduran, and El Salvadoran Consulate officials cash deportee’s checks issued by U.S. detention facilities that can’t be cashed in Mexican financial institutions.

That morning Mayer was assigned to do intake interviews.

“In my 20 years here being engaged in frontline immigration work, this was probably my most difficult and hopeless day,” he wrote to me. “There were probably 120 migrants looking for support. Most were coming from Guatemala and Honduras, wanting to seek asylum. There were a lot of women with children who were fleeing horrible domestic violence situations where their ex-husbands are trying to kill them. They had no idea that Attorney General Sessions has changed the laws and that they can’t even apply, or if they do, they will be separated from their kids. It was so painful to see them process this news and they are so far from home.”

There is no deterrence in what people don’t know. People with nothing to lose can’t be deterred.

These migrants have nowhere to go.

“They can’t go back home because the cartels and gangs are waiting for them,” explained Mayer. Undocumented detainees learned gang life in U.S. prisons and took it with them when they were deported. Today those American-born gangs in Latin America demand payments from families in exchange for loved ones’ lives.

Mayer and his congregation at Church of the Good Shepherd now care for two asylum-seeking families who entered the U.S. before the current administration changed the rules. A gang demanded payment in exchange for one of their teenager’s lives; relatives who couldn’t pay had already been murdered. So the family fled. “But now they would be turned away and most likely won’t be able to qualify for asylum,” said Mayer. “A beautiful caring family that is experiencing pure evil.” Even now they fear being hunted down by the gangs. And if Mayer is right they face deportation and certain death. 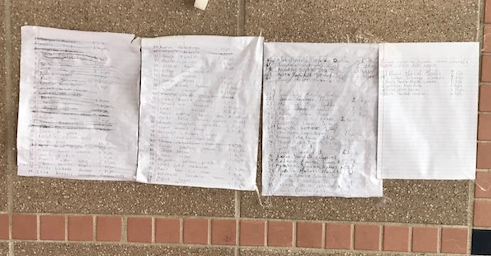 The border situation is overwhelming available humanitarian resources. Mayer and the team from Good Shepherd also went to the DeConcini Port of Entry, in Nogales, Ariz., to support the families that are waiting in line to present themselves for asylum. “There are so many now that there is a list of over 90 families on the wall so they won’t lose their place in line,” Mayer wrote. “It used to be that Border Patrol could process these asylum claims pretty quickly, 20 or more a day at the Nogales port of entry. Now they are doing 3 to 5 a day. Just so that people can suffer.”

On Thursday, June 14, Attorney General Sessions quoted from Romans 13 in an attempt to defend the U.S. policy responsible for what Mayer and others on our Southern Border are witnessing.

Attorney General Sessions, let me quote from Isaiah regarding your terrorizing of migrants and their children.
Woe to those who make unjust laws,
to those who issue oppressive decrees,
to deprive the poor of their rights
and withhold justice from the oppressed of my people,
making widows their prey
and robbing the fatherless.
What will you do on the day of reckoning,
when disaster comes from afar?
To whom will you run for help?
Where will you leave your riches?
Nothing will remain but to cringe among the captives
or fall among the slain. 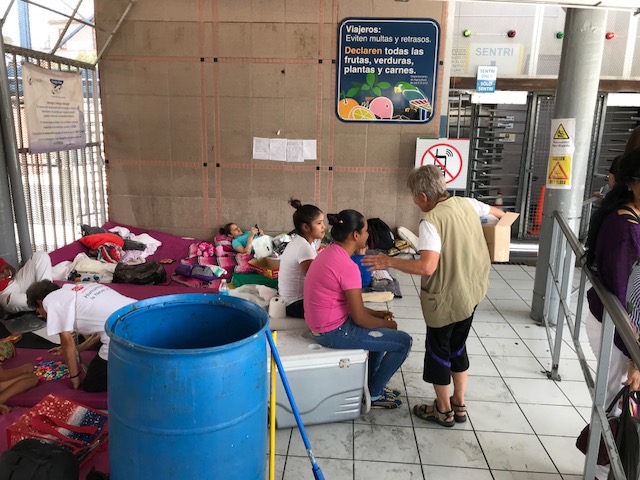 That’s what the Bible says about current U.S. immigration and border enforcement policy, about separating children from their parents and warehousing them in detention facilities, about denying asylum to people being hunted down by gangs and cartels, about telling women that domestic violence is not an asylum-worthy life circumstance.

For the past three years the Good Shepherd United Church of Christ has helped more than ten families present themselves at the border and make their way into the asylum process. Four Southwest Conference congregations offer hospitality to sanctuary guests. All of them go to church with us, and this summer, in the hope of healing and with a prayer for protection we are taking their kids to camp with us. “But the current crisis at the border with parents and families being separated and the tragic changes in the asylum laws immigrant families are beating our spirits down as we watch the most vulnerable migrants barely clinging to life,” Mayer said. “It is difficult being in the eye of the storm, bringing Jesus’ compassion to an evil situation in which our current administration is purposely seeking to inflict pain and cruelly destroy people’s lives.”

The work is too big for one church or one UCC conference. We need your financial support to Keep Families Together. Help to continue assistance to asylum families who are prohibited by law from working. They need to rent apartments. We need to distribute toothbrushes, travel size toothpaste, shampoo, razors, towels, wash cloths, sleeping mats, coloring books and crayons for kids.

Send your notes of encouragement to these families to the Southwest Conference, 917 E. Sheridan, Phoenix, AZ 85006, and we will pass them along to families camped on the border. Please demand policy change with your congressional representatives. All of us thank you.