Representatives of the Ho-Chunk American Indian nation welcomed the United Church of Christ’s national meeting to their people’s ancestral homeland Friday, June 21, and heard UCC leaders confess the Church’s historic sins in its treatment of native North Americans and others.

This was a first. The gifts of Native peoples have been highlighted at past UCC General Synods, and the history of violence against them has been acknowledged as well. What made this moment unique was a request for permission made by Synod leaders, Moderators Norman Williams and Penny Lowes to Ho-Chunk leaders Michael Goze and Hattie Walker. The four came together on stage to open the June 21-25 national gathering at Milwaukee’s Wisconsin Center.

“Many of us are settlers, descended from colonizers,” read Lowes, assistant moderator, during a “ritual request” during the opening worship service. “We acknowledge our churches’ complicity in the systems of injustice that keep this land from being restored to you. Though the violence and genocide against native people across this continent cannot be undone, we desire to walk in humility, faith and justice, to learn from you and work with you, until we see a world reflecting Creator’s grace and love and a just world for all.” 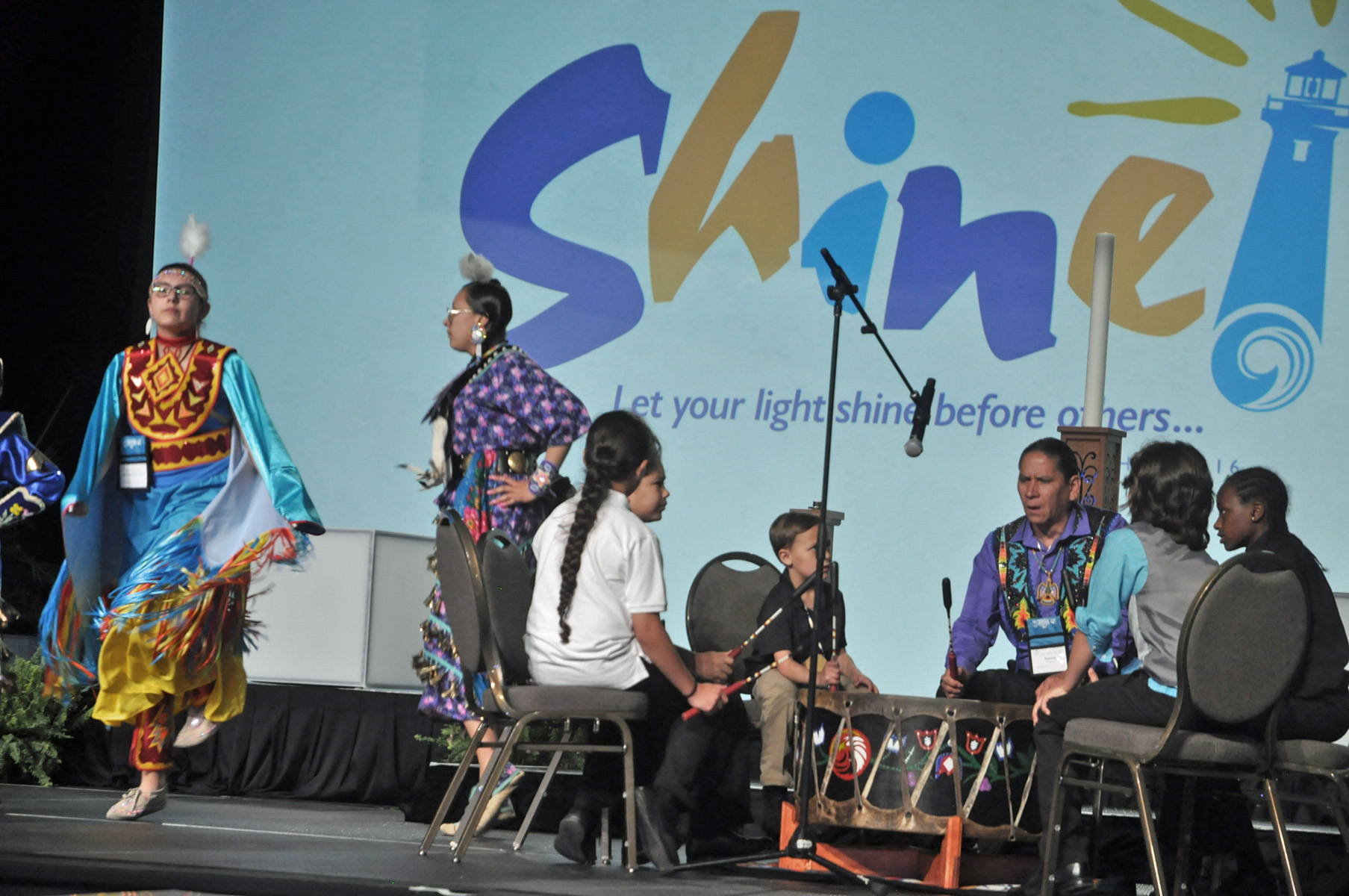 Then Williams asked Walker and Goze: “May we meet here, on your people’s ancestral land, and conduct the business of the 32nd General Synod of the United Church of Christ?”

Walker, who co-chairs the UCC’s Council for American Indian Ministry, acknowledged the request in behalf of Ho-Chunk Chief Clayton Winneshiek, who had hoped to attend but was unable to at the last minute.

Then Goze, a member of All Nations Indian Church, a UCC congregation in Minneapolis, and a Synod delegate from the Council for American Indian Ministry (CAIM), responded: “It is my honor to welcome you all. … The land that we have assembled on is the historical land of the Ho-Chunk Nation and holds all of the gifts of God’s presence. Throughout the history of the Ho-Chunk people we have shared this land with fur traders, settlers and other tribes and nations with the understanding that we all respect the land and all of its splendor. … The Ho-Chunk Nation asks that you keep in your hearts all people as you do the work of the 2019 General Synod. May you all shine.” That last phrase was a reference to “Shine,” the Synod’s theme from the Gospel According to Matthew. 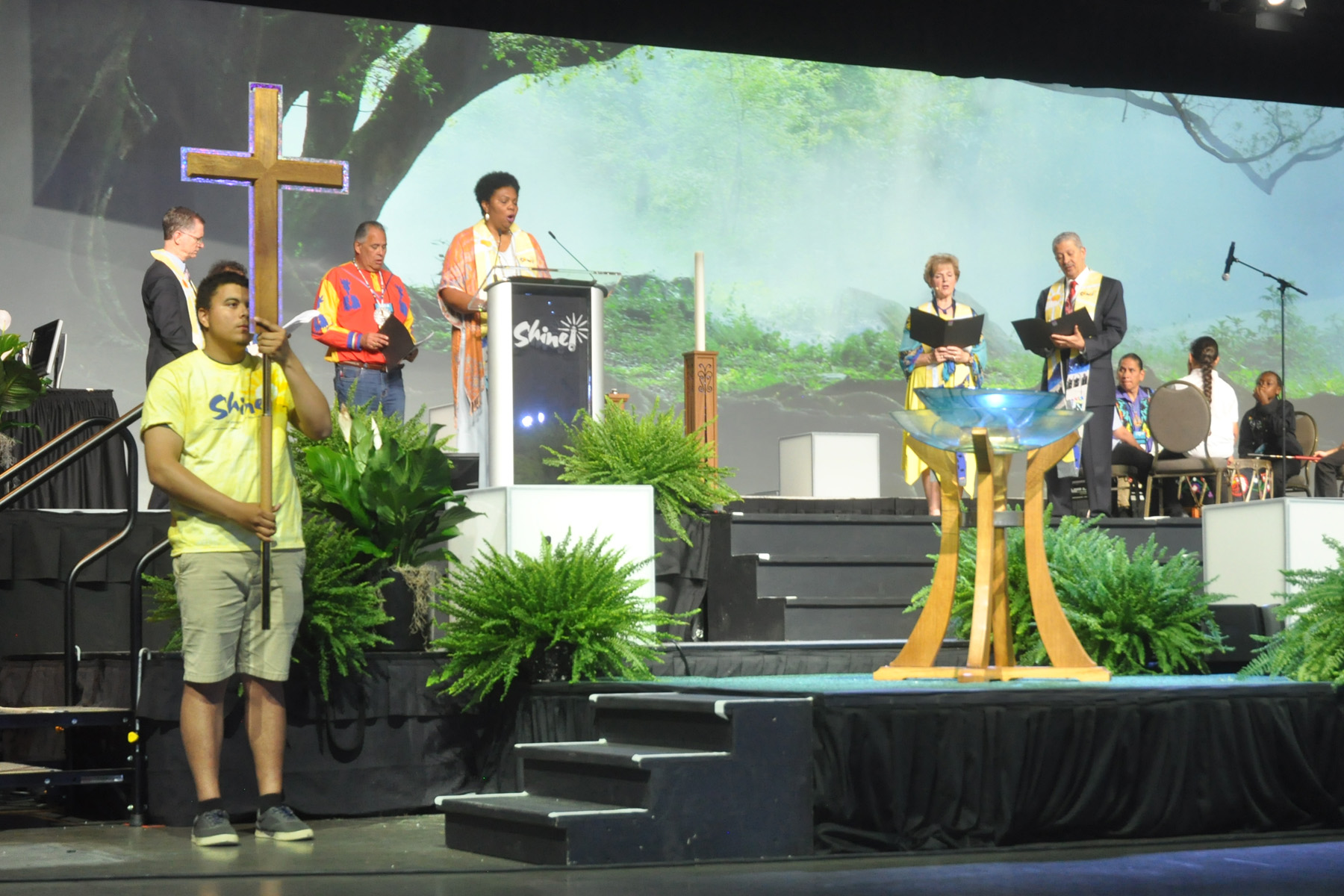 More confessions followed, as the litany — in sections led by General Minister and President John Dorhauer and Associate General Ministers Traci Blackmon and James Moos — remembered wrongs done around the world in the name of Christ. “We confess to complicity in the sins of colonialism, slavery and genocide,” Dorhauer read. “We open our hearts to lament all that has been lost and commit ourselves to justice.” The congregation responded with prayers for God’s help, for “liberating and transforming light.”

A sign of hope came in the dedication of the Amistad Cross and the Amistad Font, made in part of a special wood recalling a famous freedom fight from the UCC’s history.

A celebration of thriving Native culture came at the start of the service as 10 young students from the Indian Community School of Milwaukee offered traditional native drumming and dance. The drummers offered a special witness during the service, keeping a steady, gentle heartbeat going during the litany of confession.