Luminous cross and font to debut at General Synod

Years ago, the Rev. Alexandra Childs saw rainbows of light coming through the crystal edges of the cross in Cleveland's Amistad Chapel. She wanted to borrow that cross and that light for the General Synod stage environment she was designing. Mounted atop a long metal rod, the cross was, unfortunately, too heavy for a procession and could have been damaged in transit.

Now the light can travel. The colorful cross at the UCC Church House inspired Childs to create a portable one that will be dedicated Friday afternoon, June 21, during opening worship at the 2019 Synod in Milwaukee. This week, Childs drove the new cross and a glass liturgical font all the way from California, where she designed them in response to an invitation and commission from the national ministries of the UCC.

"Shine," this Synod's theme, should help illuminate their debut.

"I was longing for liturgical furnishings that reflected light in a magical and luminous way," said Childs, who has designed the 2019 Synod environment, as she also did for Synods in 2007, 2009 and 2011. The two new pieces will be centrally visible throughout the five-day event. The cross is edged with "dichroic" glass fired in high heat with precision equipment. "Each piece has an inherent color, but it reflects a different color," she said. "Every angle you see it at is different." The font has moving water, overflowing from one bowl into a second below. Its top bowl features layers of swirly blue-teal glass infused with "dichroic frit," lumpy bits of luminous, iridescent color. "There's something magical that happens when light goes through water," she said. "I wanted this font to be a vessel for that to happen."

Childs, who serves as a traveling minister of the arts with First Congregational Church, UCC, Alameda, Calif., wanted both pieces to connect with Amistad history. That's the 19th-century event in which captives rebelled aboard the slave-trade schooner La Amistad, wound up in Connecticut and were aided by anti-slavery Congregationalists, forebears of the UCC. She sought out Iroko, a revered wood from western Africa, the Amistad captives' homeland, for the main part of the cross and the legs that support the font. A paschal candle stand already used at Synods is also made of Iroko, as are the cross and other chapel pieces in Cleveland.

"I have been absolutely floored by the majesty and importance of the Iroko tree," Childs said. "It is of vital importance both to the biotic community – the animals, the soil, the earth – and to the human communities around it. It grows fruit that is both nourishing and healing. Its bark and its sap are healing for the skin. It grows huge, beautiful buttresses as roots. They are absolutely breathtaking." She was unable to get recycled Iroko wood, but did find a supplier in Stockton, Calif., who carried Iroko from Congo.

Based on Childs' concepts, sketches and descriptions, West Coast artisans helped her fashion everything. Seattle glassmaker George C. Scott crafted the font's colorful top bowl. In the Bay Area, a blacksmith named Chris created a ¼-inch steel ring to support the legs of the font, and woodworker Charles Pyle shared his shop, equipment and advice with Childs. He made the pieces of the cross from Iroko. She did the finishing work, sanding and shaping the wood and creating channels in its edges for the glass, which she cut, fine-tuned and glued together, deciding which colors should go next to each other.

The result, she hopes, is that "somehow the light that this cross conveys can touch people's hearts and they can feel the love of our beloved brother Jesus." She hopes this will happen throughout the Synod, starting when cross and candle are borne into the meeting hall in the Wisconsin Center. "We don't do 'high church' so much in the United Church of Christ, but there is ancient power in that act of bringing in the Christ light as a collective body." She imagines Synod participants "in the midst of worship, in reflection on the existential nature of life and the divine paradoxes, finding those flashes of light, symbolizing the amazing love, fiery, passionate, healing love of our brother Jesus Christ. That's where I believe art and worship come together is where people meet the divine in themselves. It is what I design for in my sacred spaces." 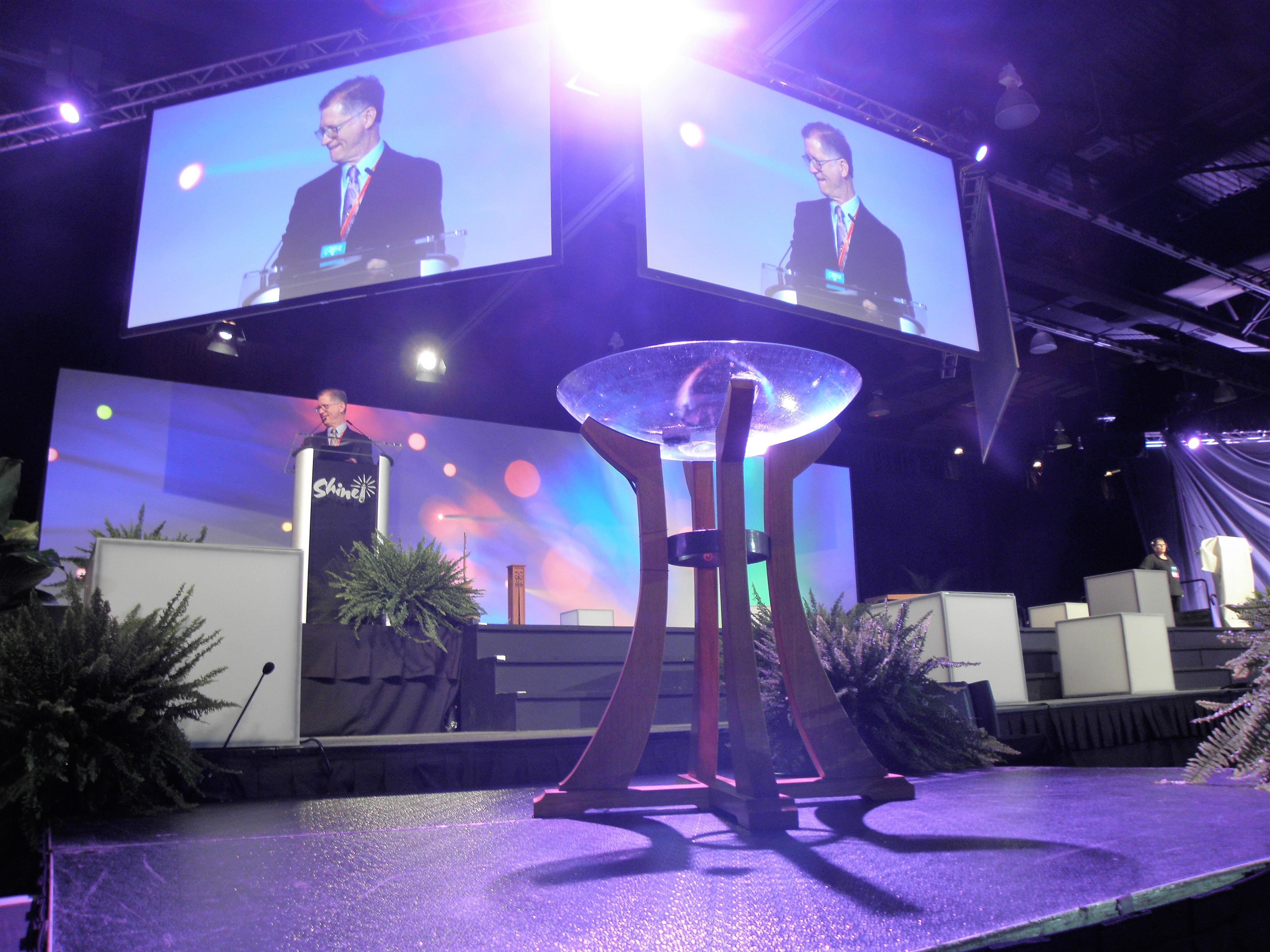 The font, to be filled during opening worship with water from around the world, is meant to be inviting. "The way the legs are, the way they greet and interact with the bowl, they look like hands," Childs said. "They look like The People coming together to lift up the sacred water – the living blood of our earth and the sacred water of our faith. These bountiful bowls overflowing: may all be included in the community of Christ. May they all feel welcome, all feel invited. There is room for you at these waters."

For both pieces, Childs ordered padded road cases that will arrive in Milwaukee for the post-Synod trip to Cleveland. She hopes the cross and font will grace meeting halls at future General Synods and other national meetings for years to come, and that they will be central features. "I firmly believe that it is the needs of worship services that define the space."