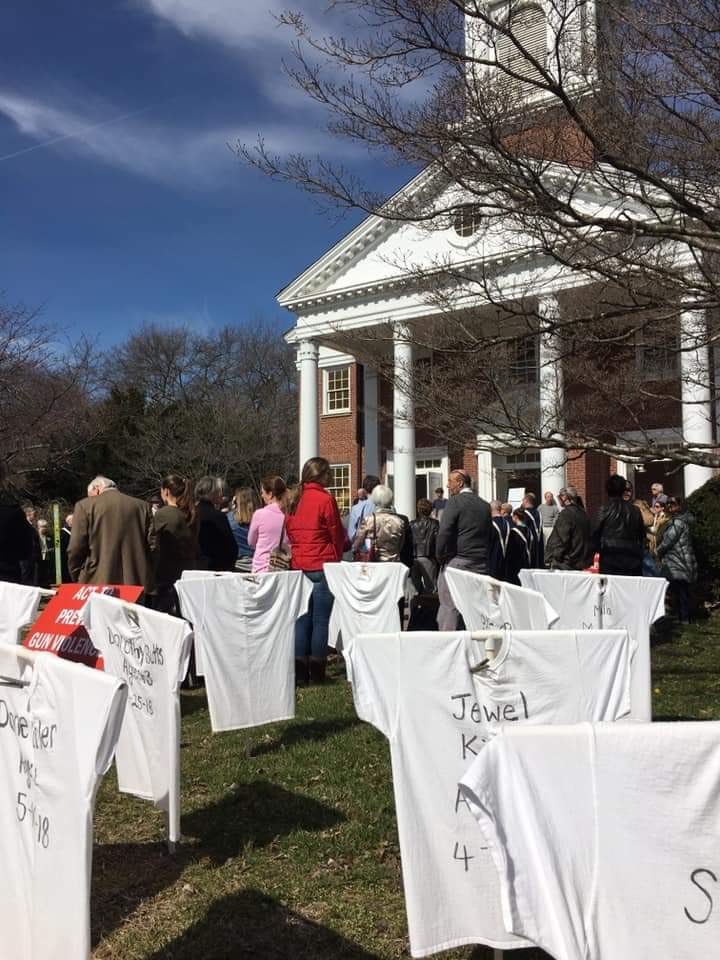 A Maryland United Church of Christ congregation celebrated communion outdoors on Sunday, in the midst of a haunting reminder of the human cost of gun violence.

A memorial of 120 T-shirts, planted in the lawn outside Westmoreland Congregational United Church of Christ in Bethesda, each bearing the name of a person killed by gun violence in the Washington, D.C. area during the first part of last year. White shirts, each which marks a life lost, with ages and death dates.

“Celebrating communion outside amid the shirts helped us visibly remember those whose lives have been lost,” said the Rev. Timothy Tutt, church pastor. “Communion is a reminder that God is with us—feeding us when our souls are hungry and quenching the thirst of our grief—even amid pain. The cup also nurtures us and offers us sustenance to go forth in the world to work for peace and justice.”

The congregation, which has long worked for the prevention of gun violence, began the March 24 service worship service in the sanctuary before moving outside. Kaeley McEvoy, Westmoreland’s coordinator for of Congregational Life, Faith Formation and Volunteer Corps, served as preacher and presided at communion.

“My scriptural message (using John 13:1-17) noted that we all have feet that are wounded, need washing and are made for walking. In the act of foot washing, Jesus knowingly cares for his disciples, specifically Peter and Judas, who are about to deny and betray him. In this act, Jesus shows that though our feet are wounded, our souls are full of pain or brokenness, it is our job as Christians to love each other in vulnerable ways,” McEvoy said. “In light of the pursuit of justice and the call to end gun violence, our broken feet must be mobilized to stand in vulnerable spaces with and among the reality of pain, knowing that God’s mercy, grace and love are ever present.” 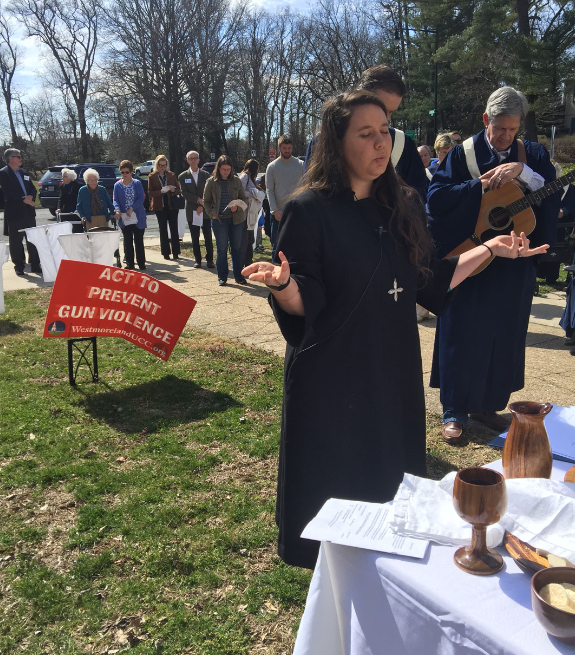 McEvoy said that one part of her role is to nurture and build authentic and life-giving community within the congregation. And that means finding ways to create safe spaces to be vulnerable. “This memorial invites the broader community into a sacred space to process pain communally,” she said, “which is tied to my call to expand Westmoreland’s vision for a just world outside our walls.”

She also noted a personal reason that fuels her call.

“I grew up at First Congregational Church of Woodbury in Woodbury, Connecticut which is 15 minutes away from Sandy Hook, Connecticut,” McEvoy said. “Since that day seven years ago, gun violence prevention has been intricately tied to my call to seek justice in the world, and I will continue to pursue this work as I work toward ordination in the UCC.”

She works with the church’s Gun Violence Prevention Group, which has been in existence for several years. Their advocates have worked with a national interfaith group, Industrial Areas Foundation, to promote smart gun technology and to encourage shareholders to force gun manufacturers to create safer guns and to report gun crimes. Church members have participated in protests at D.C. area gun shops and held letter-writing campaigns to thank elected officials for promoting safer gun laws. The church choir also held a concert in conjunction with Wesley Seminary to raise funds for a scholarship in memory of the Rev. Clementa Pinckney, senior pastor of Mother Emanuel A.M.E., who was shot and killed in Charleston in 2015. 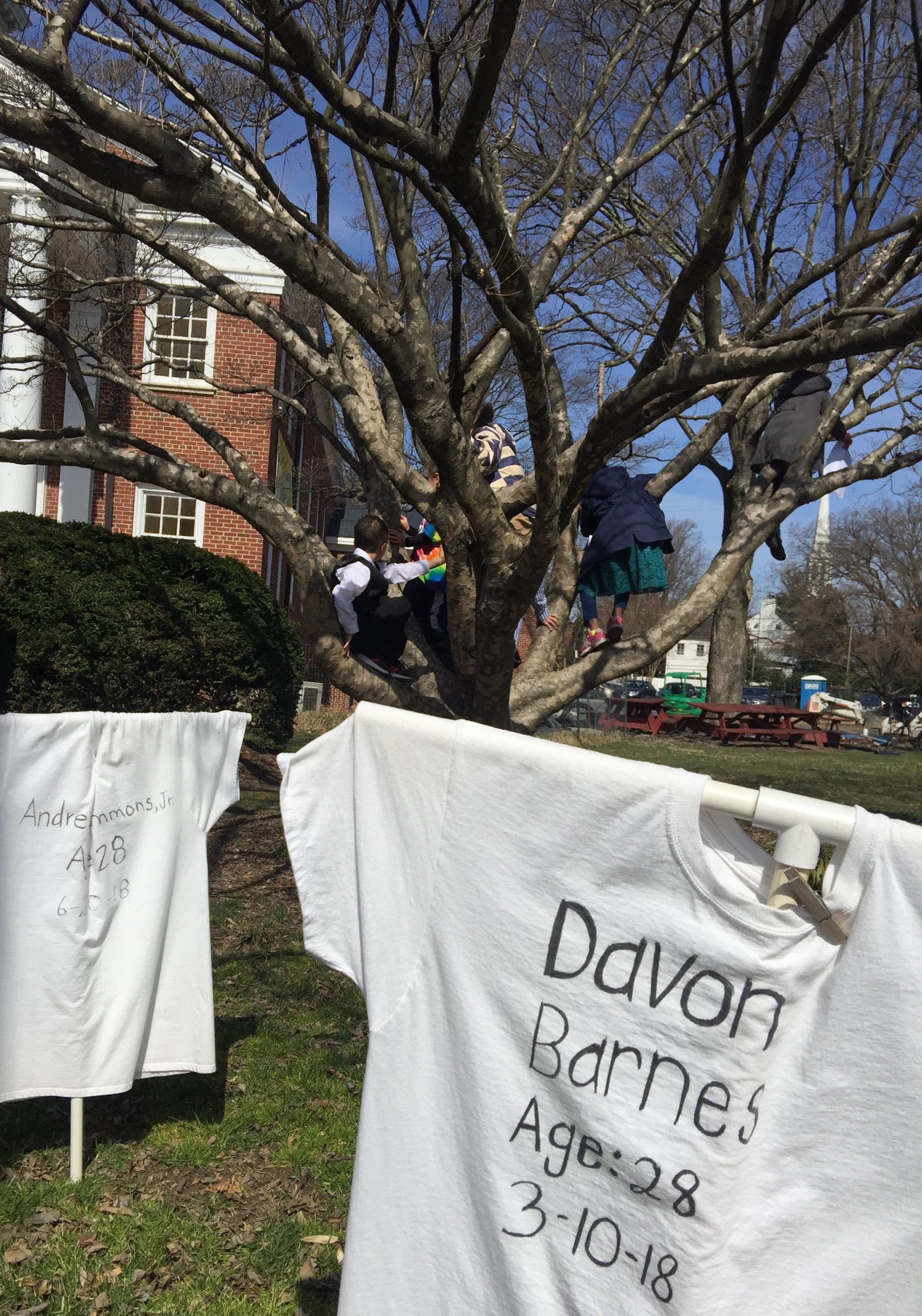 “Westmoreland sits on a busy traffic circle on the D.C.-Maryland line, so we’ve had lots of traffic see the shirts. Neighbors and passersby have stopped to take pictures. We’ve had phone calls and emails from family members of those who were killed, thanking us for honoring and remembering their loved ones,” Tutt said. “Church members have talked about doing the sad work of creating the shirts with additional names for 2019 deaths.”

The memorial to the lost, created by a group called Heeding God’s Call to End Gun Violence, will stay up on the church lawn for the next week before it will move on to another location.

“Gun violence is a plague in our nation. It is a complicated issue that involves cultural expectations, constitutional interpretations, political chicanery and a web of state and local laws. For us, as Christians, for me as a pastor, working for changes in gun laws involves matters of faith and dignity,” Tutt emphasized. “Faith that God’s love and goodness is bigger than minor political gains, bigger than a muddled status quo, bigger than our old ways of being. And [the] belief that the dignity of each person deserves a life of safety and peace, free from fear of gun death. These t-shirts are symbols of that dignity.”