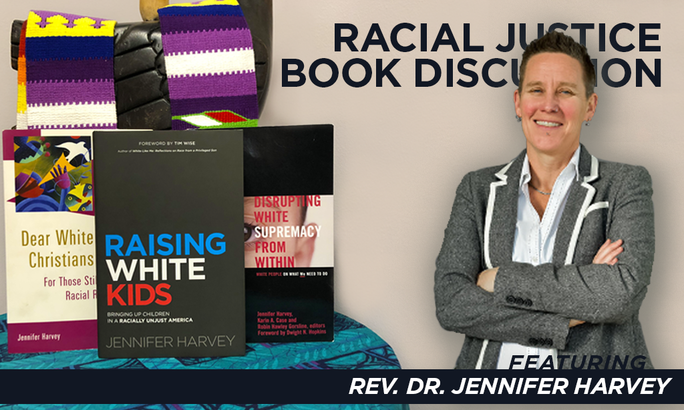 In an upcoming United Church of Christ webinar planned to address the issue of racism and whiteness using the books of a celebrated educator and theologian, participants can expect to be a little uncomfortable.

“There are long legacies of white silence in the lives of white U.S.-Americans, including Christians,” said the Rev. Jennifer Harvey. “These legacies mean we will be uncomfortable—even as we are trying to face something that has been violent, sinful, deadly and from which we have unjustly benefited — even if we didn’t want to. There’s no way around discomfort. There’s only through it.”

Harvey, a professor of religion at Drake University, has written several books aimed at helping church people in the Christian Church actively engage in dismantling racism. One of her most recent, “Dear White Christians: For Those Still Longing for Racial Reconciliation,” is the focus of Justice Ministries’ All Church Read. On Thursday, March 26, from noon to 1:15 p.m. EDT, Harvey will participate in an interactive discussion of this book, hosted by the Rev. Velda Love, UCC minister for racial justice.

“We are in a racial crisis in this nation,” said Harvey. “It’s been true for a long time, but the tinderbox is ready to go up in flames in ways it hasn’t been for decades. White people who care have to ‘activate’ that care—make it go beyond thoughts and prayers and into the world into action.”

Harvey grew up in a white evangelical family in Denver, attending public schools under a desegregation mandate. “Because of busing, my earliest friends were African American. But, by high school, all my accelerated classes were white; we had been racially tracked. I didn’t know what was going on, but I knew something was deeply wrong,” she said.

In college, she discovered the work of James Cone, the founder of Black Liberation Theology, and better understood her life experience.

“I realized white supremacy had woven through my life — Cone answered questions no one else had before. He also was clear that God is love — which means God must be a God of justice — because if God loves us then God can’t countenance human suffering. And if God is a God of justice, then in the U.S., God is Black.”

When Harvey studied at Union Seminary, “I had incredible peers who told me clearly: you can care about racial justice and claim God is Black, but not without taking responsibility for your own ‘white’ racial identity and figuring out what that means for you. Taking my own unearned privilege seriously, along with contending with the ways whiteness daily makes me complicit became the call of my life from that point forward. It still is.”

When ‘reconciliation’ is wrong focus

Harvey wrote “Dear White Christians” after it became clear to her “that the focus on ‘reconciliation’ within predominantly and historically white churches was a deeply flawed paradigm for interracial life together.” The book, she said, “is a way to talk about the work of repair, reparations, reparative justice as the paradigm that is incumbent on white U.S.-American Christians — given our racial history — if we want to be reconciled.”

After getting out to speak in churches and fielding questions from parents on how best to raise children attuned to racial justice and antiracism, Harvey wrote “Raising White Kids: Bringing up Children in a Racially Unjust America.” Her current book is working through “the catastrophic participation of white Christians broadly in voting for the 45th president, despite the clear evidence of his deep hatred of Black and Brown people and the positive response white nationalists had to him.”

“Jennifer Harvey is deeply invested in liberating all of us from the constructed narratives of white supremacy in our nation and within the Christian Church,” Love said. “She has taken an in depth look at her own complicity in the structures, systems, and institutions that upholds whiteness as the norm. Her love for God’s people and the Christian Church give us insights as to how we can dismantle racism, and live in the tension of a prophetic and liberating Gospel of Jesus Christ. I invite you to be part of this life-changing conversation.”

Love is working on a free downloadable study guide for “Dear White Christians” that will be available before the March 26 webinar. A “Raising White Kids” study guide can be found here

“My books try to be concrete and clear — to say explicitly that those of us who are white, and who often feel like we don’t know what to do or don’t even know what we don’t know, aren’t at FAULT for this happenstance of our lives. This has been a multi-generational failure,” she said. “BUT, once we know there is a racial crisis and that we as white people are not equipped to join our siblings of color as truly reliable, persistent antiracist-committed siblings, it is our responsibility — moral and by call of the gospel — to prioritize getting equipped. We can’t just leave it to chance.”

Love is inviting all of those interested in participating in the conversation to register for the live video conference, to be held via Zoom. Credentials will be sent to registrants during the week of March 23.

“We have a role to play, and we can only play it if we commit to getting ourselves equipped to learn what we haven’t known, try things that are new, take risks — even knowing we’ll make mistakes,” Harvey said. “The church could play a huge role in bringing this democracy back from the brink; but race has to be the starting point because it is legacies of white supremacy and racism unredressed that have gotten us to the crisis we are in today. Every step we can take as white people to grow our skills, capacity, relationships of accountability, and more matters. And those steps only happen when we choose them. So come to the webinar!”