“There has been an objective gain in the quality of women’s lives for those fortunate enough to have access to procreative choice. That millions upon millions of women as yet do not possess even the rudimentary conditions—moral or physical—for such choice is obvious. Our moral goal should be to struggle against those real barriers—poverty, racism, and anti-female cultural oppression—that prevent authentic choice from being a reality for every woman.” —Beverly Harrison, from Making the Connections 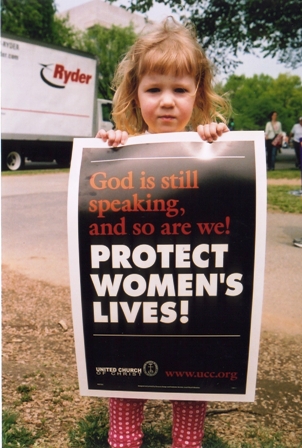 The United Church of Christ has supported reproductive justice issues since the 1960’s.

As a human rights issue, reproductive justice promotes the rights of people to bear children they want to have, to not bear children, to raise the children they do have in safe and healthy environments, and express their sexuality without oppression.

After the Supreme Court decision in 1972, Roe v. Wade, which legalized abortion in the U.S., the UCC has joined with other faith groups to protect women’s equal and fair access to abortion and family planning which have been under attack consistently. The strategies of those seeking to overturn Roe have shifted to state legislation.

There has not been much reproductive health legislation in the past year with any traction for movement at the federal level, but many states continues to pass more restrictive measures around access to abortion. Among these restrictions are: parental consent for minors, bans on specific types of abortion procedures, unusually stringent and burdensome regulations on abortion providers, and funding roadblocks.

The Guttmacher Institute provides state by state information on the status of current legislation.

Commentary: Guided By My Grandmother’s Wisdom: Faith and Reproductive Justice

Written by Rev. Chris Davies
My grandmother taught me how to be a Christian, and told me about marching for abortion rights prior to Roe v. Wade.

Commentary: Women’s Bodies are Not Battlefields
Written by Kristen Walling
It is time for the U.S. government to change the way it responds to the needs of those recovering from sexual trauma. It is time for our President to use his power to stand up for the rights of victims of sexual violence, writes Kristen Walling.

Before the U.S. Supreme Court’s historic decision in Roe v. Wade in 1973, women had to rely on inexperienced medical providers who were willing to perform abortions. The procedure was illegal in many parts of the country at that time, and they were also considerably risky. A network of clergy emerged to help connect women seeking an abortion with doctors who could safely provide them. Made up of Protestant ministers, Jewish rabbis, and dissident Catholic nuns and priests, the Clergy Consultation Service announced their services on May 22, 1967. Several UCC clergy were involved in launching the network, and several more joined it over the years. Read more via UC News.

Rev. Barbara Gerlach is a retired United Church of Christ minister. Before Roe she also served as a pastoral care provider to pregnant women through the Clergy Consultation Network. Watch an interview with Rev. Gerlach from the Religious Coalition for Reproductive Choice’s online talk show, Sacred Crossroads, to hear more about her work and how personal stories fueled change in the ’60s and ’70s.

An Update After the Hobby Lobby Decision: What It Means and Some Next Steps
Recently the Supreme Court handed down a decision with startling implications for individuals’ religious liberty and women’s access to contraceptive coverage. Find out what the decision means, and what UCC advocates are trying to do about it.

Health Equity, Racial Justice, and the Supreme Court Decision on Contraception
The Supreme Court decision giving some corporations the right to deny coverage of certain types of contraception to their employees based on religious freedom will have a great impact on women of color.  Although, the ruling does not single out women of color, our political and economic realities tell us that women of color often bear the brunt of the negative impacts of restrictions on women’s health.

Major Mainstream Religious Leaders Support White House on Contraceptive Coverage In Health Care Reform
Geoffrey A. Black, Past General Minister and President of the UCC, has joined other faith leaders in a  statement supporting the ruling of the Department of Health and Human Services requiring religiously affiliated institutions, except for houses of worship and similar sectarian institutions, to include contraception coverage without co-pay in health insurance plans offered to their employees.

The act of praying with and for someone at an often difficult time of decision is a reminder that one doesn’t have to journey alone; it is an act of companionship and love precisely at a time when women and their families may feel very much alone. The prayers below are from our partners at the Religious Coaltion of Reproductive Choice. They cover numerous topics and come from many different faith traditions. We hope you’ll find one that speaks to you.

For Women with Problem Pregnancies | “We pray for women who know that life is beginning within them, who face the agony of wondering what to do when they do not know if they can cope…”

For Men | “… We ask that you would help them be all that you have created them to be. Help them to see themselves as whole persons…”

For Those Who Choose Adoption | “We pray for birth mothers. We ask for informed maturity, compassionate ears and shoulders, and tough love to help them make good choices for themselves and their children…”

For Children in Need | “Help us, Creator of All, to continue to open our hearts and hands to those children in our world whom we can see are motherless, fatherless, hungry, ill, abandoned…”

For Providers of Women’s Health Care | “Gracious Provider of Care and Protection, we remember and stand with health care professionals who furnish health care for women.”

For Women Coerced and Forced Against Their Will | “God of our lives, help us to find ways to break the silence that perpetuates the cycles of sexual abuse and violence…”

For Women Who Are Immigrants and Seek Refuge | “Gracious God, you who guided Naomi and her family to look for bread in Moab, a foreign land, protect the women everywhere who have to leave behind their home or homelands so that they and their families can survive…”

For Women Who Struggle to Feed and House Their Families | “… But we also acknowledge that there are so many — especially women –who, in these times of an overabundance of low wage jobs, struggle to keep food on their tables and roofs over their heads…”

For Those Called to Elected Leadership | “… You have created and are creating still.  Inspire our leaders to follow your teachings.  Empower them to engage in conversations that will shed light and compassion.  Help them listen to those with whom they disagree…”

For Those Called to Support Elected Officials | “… Merciful One, inspire and renew those called to serve on each staff so that whether seen or unseen, they know that they remain grounded in your care… “

A Chaplain’s Prayer | “… Promise yourself, whether or not others understand, you will always be true and faithful to your own deepest self…”

A Protestant Minister’s Prayer | “O God, you who are closer and more loving to me than I am to myself: I pray for your blessing as I join this sisterhood of difficult choices. As I sort out my feelings, lead me in the path of healing and resurrection.”