We’ve asked UCC advocates to help us unpack the complex justice issues that we’re working on. This month Rebekah Choate, Associate for Global Advocacy and Education of Global Ministries, highlights the nexus of human trafficking and migration.

When you picture people who have been trafficked and are now what we call “modern slaves”, who do you picture? The most common picture is of a poor woman or child in forced prostitution or sex slavery. However, this accounted for only 20% of all modern slaves in 2016 (4.8 million people). The remaining 80% of modern slaves (20.1 million people) are in some other type of forced labor; the industries that had the most modern slaves in 2016 include domestic servitude (24%), construction (18%), manufacturing (15%), and agriculture and fishing (11%). (Read more)

Register Now! Ecumenical Advocacy Days is April 5-8, 2019
The 2019 EAD theme is “Troubling the Waters for the Healing of the World.” This event will draw on the wisdom and inspiration from the Civil Rights Era and young leaders to empower and encourage one another to “Trouble the Waters” to bring healing to our nation and world.  On Friday April 5th, there will be a UCC pre-event to help weave together our many justice movements. Join us in Washington D.C. in April as we seek to stir up #GoodTrouble for all God’s children.

Webinar: From Climate Reports to Moral Imperatives - January 9
Recently, a couple of major climate reports have been released that highlight the impact of climate change on our world and the urgent need to act. As part of the monthly Creation Justice Webinar Series, the UCC’s Jim Antal will join with Harvard University’s Naomi Oreskes to explore the insights of these reports and the moral imperatives that arise from them. Sign-up now to join this webinar.

The UCC at Creating Change
January 23-27, 2019; Detroit Marriott at the Renaissance Center, Detroit, Michigan; www.creatingchange.org; Contact: Mike Schuenemeyer, schuenem@ucc.org
The United Church of Christ is a sponsor for this national LGBTQ justice and equality event and will host a faith networking reception on Wednesday, January 23 at 8:00pm at the conference venue in Detroit. Amy Johnson, Elizabeth Dilley and Kentina Leaphart-Washington will offer a workshop entitled, "Power, Privilege, and Preparation--Tools to Thrive as LGBTQ Christian Clergy and Comrades". We will also exhibit at the conference. 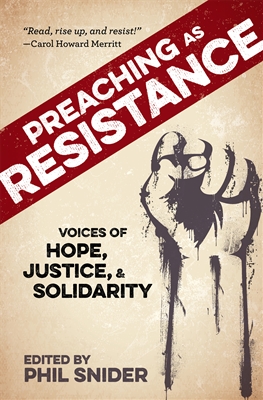 UCC Book of the Month - January
Racial Justice means equipping the Christian Church with resources that will enable congregants and communities to take serious the Gospel as messages of resistance, hope, restoration, and a commitment to equity among all God’s people. The UCC Book of the Month begins a new series January 2019, Preaching as Resistance: Voices of Hope, Justice & Solidarity edited by Phil Snider. Phil Snider has assembled outstanding preachers as contributors. Their voices challenge, liberate, lift, and bring a sound theological and biblical basis for preaching prophetic and pastoral sermons. Purchase Preaching as Resistance today! More information regarding the book discussion will be available January 4, 2019.

Away in a Manger, No Crib for His Bed | How Does it Feel to be a Problem? | We Need a Caravan of Compassion | How Long Lord...How Long?