Into the Mystic: The Spiritual Practice of Earth Care 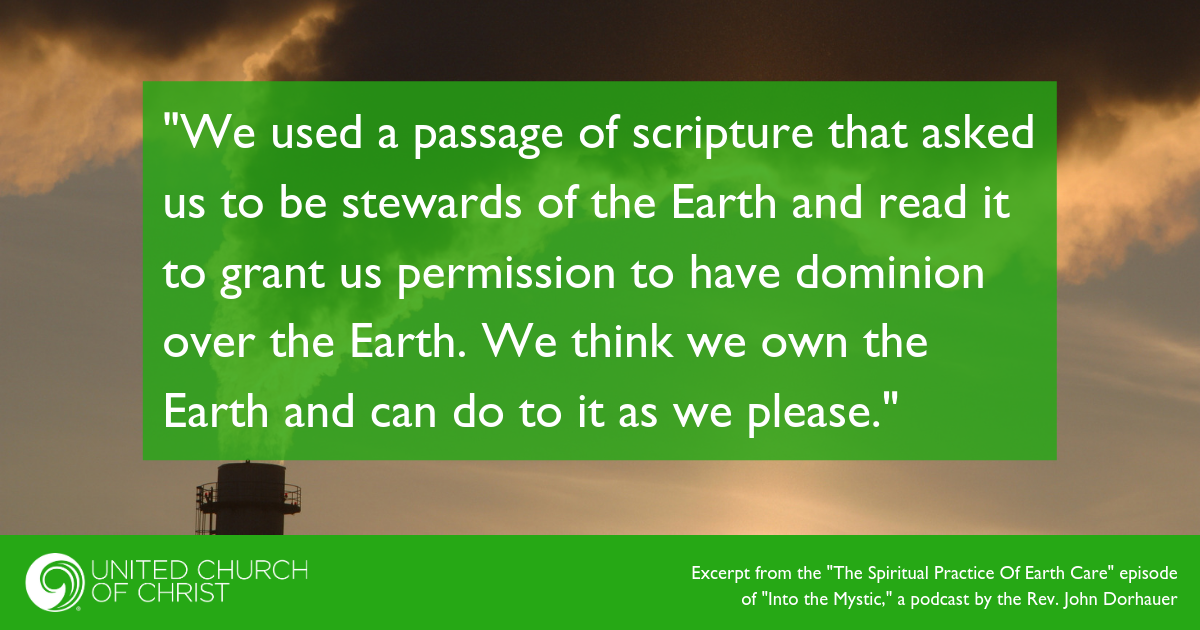 I spent last week at a gathering of over 500 leaders from across the country, all of us there to inspire each other to save the Earth from pending disaster.

Speaker after speaker stood before the audience and spoke about what they were seeing and what we could do about it. Scientists and Health Professionals and elected officials and faith leaders and community organizers all took their turns. At the end of the two days, rescuing the Earth came across to us all as the urgent matter of our times, and as possible if we all did our part. As a lifelong advocate, activist, and agitator for social justice I have long said that if we don’t resolve this justice issue, it will solve all others for us.

I was given a chance to speak from a faith perspective, and there were two things I wanted to say.

The first is that Christianity in its current articulation has culpability in the degradation of the planet.

We used a passage of scripture that asked us to be stewards of the Earth and read it to grant us permission to have dominion over the Earth. We think we own the Earth and can do to it as we please. Couple that with what appears to be insatiable thirsts for more and more and the Earth which we were meant to steward is now just the latest bauble we have used and are prepared to discard.

The second point I wanted to make is one developed in Jim Antal’s book Climate Church, Climate World.

He argues there that the spiritual practice of creating hope through healing Earth and wisely stewarding its precious and dwindling resources should now become the singular vocation of the Church. Put simply, saving this planet becomes the reason we exist.

We could learn a good deal from some of the spiritual practices of the indigenous populations among us, who have long felt a deep spiritual connection to Mother Earth. In ways most Christians can no longer fathom, their spiritual tunings are such that they hear the cries of the planet. I remember as a child the first Earth Day commercial: a native American canoeing down polluted rivers, and standing by the crowded highway as a passerby threw a bag of trash out the window at his feet. When he turned to look at the camera, a single tear was falling.

Where are out tears? As species after species is wiped from the face of the Earth; as oceans clog with plastic and spilled oil; as ice melts and cities and islands start to drown; as heat levels rise and migratory patterns are disrupted; as wild-fires rage and floods teem – where are out tears?

There is a deep spiritual wound here that we have healed lightly, if at all.

If our faith is silent in the face of this, religion as we know it has lost its bearings and serves little purpose.

Every great social change has come with the spiritual force of the religious bodies assembled to support it. It is true that Christianity proved flexible enough to argue for slavery, for the subjugation of women, for the repression of labor, for the castigation of the LGBT community – and many other atrocities. Only when the great spiritual leaders of each age arose and reminded us with clarity what our faith truly says did we resolve those social evils.

It is time for that to happen again. Christianity must work hard to overcome centuries of believing we have dominion over the Earth. It is an aberration of our faith to think this. That can only happen when Earth advocates and religious leaders pray about and preach about and teach about what it means to be a steward of a dying planet. Our spiritual hearts and heads and ears and eyes must be attuned fully to a suffering we have desensitized ourselves to. If not we, then who? If not now, then when.

Hear the cries of Mother Earth. Walk gently upon her. Lift up your own voice and sing of her majesty and splendor. Create pathways to heal the wounds of this dying planet on this, our journey Into the Mystic.