From Active Hope to Sacred Circle 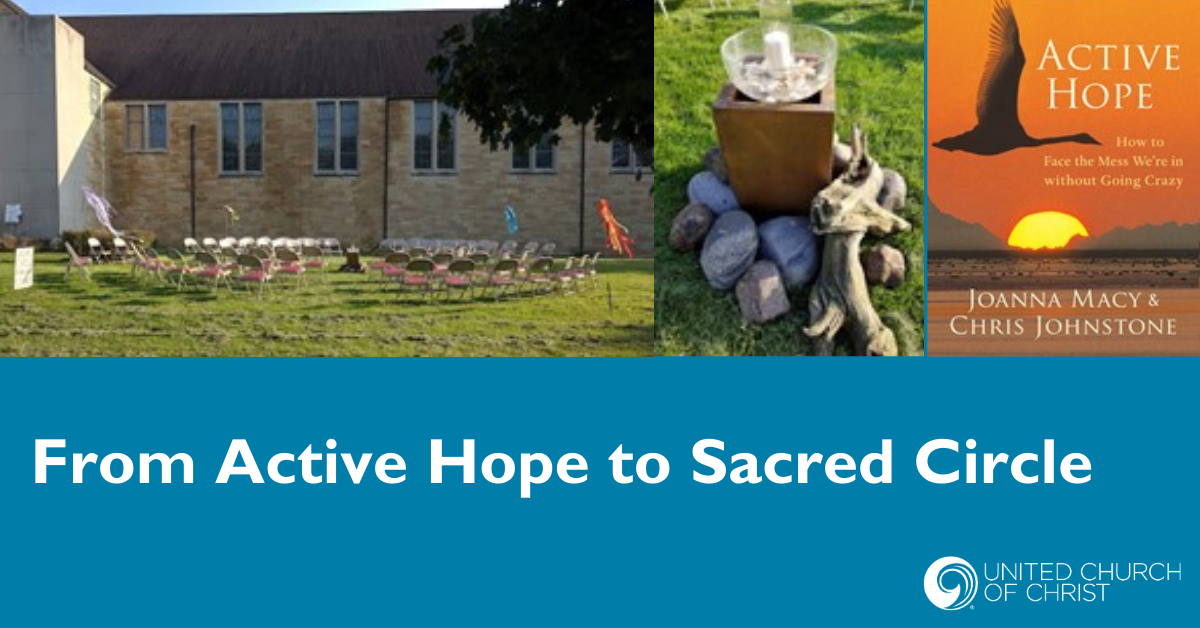 Our journey to becoming a UCC Creation Justice Church (designation awarded in November 2020) involved many steps. One of the most significant was our six-week series on the book Active Hope.

Early in 2019 we were considering ways to engage more folks in conversation and action around climate issues (and the whole range of creation’s well-being that’s in peril today). Our congregation has often done a summer book group, so we invited folks to join us in reading Active Hope. The experience was more transformational than we could’ve imagined.

Active Hope (by Chris Johnstone and Joanna Macy) is grounded in Macy’s earlier teaching, “The Work That Reconnects,” developed over her decades of spirit-rooted activism. (With both Christian and Buddhist roots, her work hearkens to a Moreness to Reality, a Generous Energy upholding life itself.) The book explores how reconnecting to ourselves, one another, our sibling creatures—and to a near mystical sense of life itself (and doing so across time and space)—joins us to an energy that can steady us in tumult and even empower us to live with active hope.

Seven of us gathered six times from June through August for discussions co-facilitated by two leaders. But “discussion” doesn’t begin to capture what we did. Besides using many of the book’s recommended exercises and activities, we followed a “reflection circle” model that creates space for quieter voices and paces the conversation so it can go deep. The book accompanied us through four “movements”: coming from gratitude, honoring the world’s pain, seeing with new eyes, and finally going forth. Each movement has a peculiar wisdom and gift. Altogether they form a dynamic spiral that generates active hope.

Already our second session brought palpable anguish into the room—eyes teared and voices broke—as we honored the pain in our souls over the present and future suffering wrought by climate chaos. We hadn’t expected to dive so deep into vulnerability … communal anguish … and authenticity. But we did. And the promise of Active Hope held true: the power to move forward comes not by avoiding such anguish, but by embracing it honestly and with others.

By mid-August, as we neared the end of our study, we began to ask, What’s next? This is one facet of attentive listening in the going forth movement: you listen to the world to discern where your rising energy might be called. Finishing the book group just weeks before the Global Youth Climate Strike, we felt called to create a simple Sacred Circle for Our Climate liturgy that we offered outdoors on the church lawn at the end of the day of the Climate Strike. A collaborative effort of the gifts within our small group, the Sacred Circle became a sort of local benediction for the day’s activities in our city and around the world. About forty persons from within and beyond our church joined us.

Since then we’ve offered two more rounds of Active Hope book groups. And two more Sacred Circles: one via Zoom in April on the 50th anniversary of Earth Day, and one socially distanced and masked this past August as part of a water protection vigil. Active Hope isn’t a book you read and then put on your bookshelf. It takes up residence in your soul. And each time we offer our Sacred Circle liturgy Active Hope spills over into the world. And we fully expect it to take other forms in our midst as well. The world, after all, is waiting.

Both are provided as Word docs that can be easily edited for your own use.

David Weiss is a member of the Earthwise-Creation Justice Team at St. Paul’s UCC in St. Paul, Minnesota.