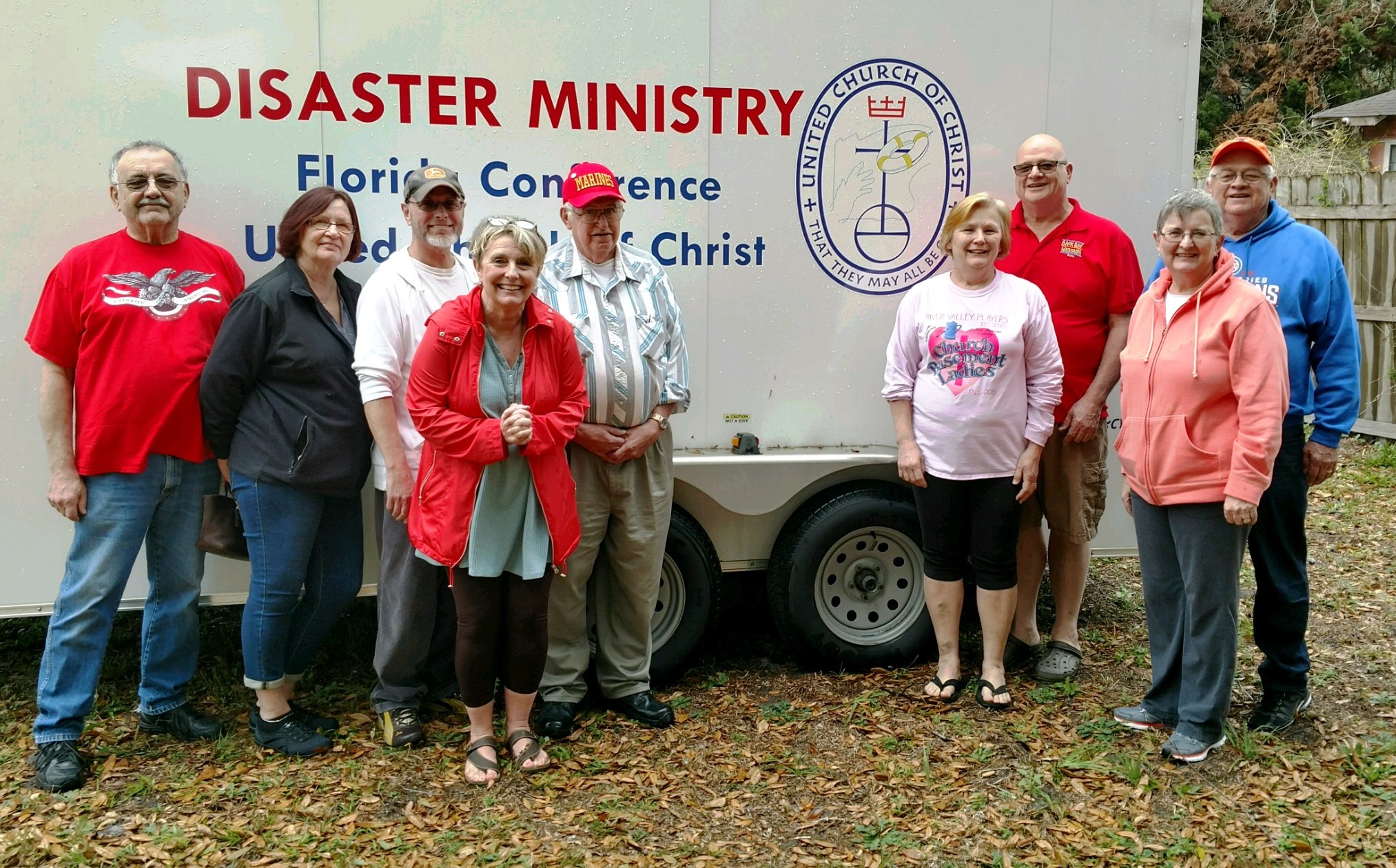 Thanks to a willing spirit and the determination to make it happen, the United Church of Christ of St. Augustine, Fla., housed its first Hurricane Matthew recovery work team last week, and is ready to host additional teams over the course of the next year or two, until work is complete.

The first work team – a dozen volunteers organized by Granville, Ill., United Church of Christ (most of them are pictured, left) – arrived Sunday (March 12) and served through Friday (March 17).  They worked under the auspices of the St. Johns-Putnam Counties Long Term Recovery Organization, formed in January to help the as many as 500 households in the two counties with unmet needs resulting from the hurricane.

"We're doing lots of dry-walling and some door frames," said team leader Cyndy Bruch, reached by telephone last week at the work site.  "That's our main focus.  But we also stripped 'popcorned' paint off a ceiling," a messy process that left volunteers covered in paint chips.

UCC National Disaster Ministries connected the Illinois church to this work site, which is managed by Catholic Charities.

Work teams don't need luxurious accommodations, but they do need facilities for showering, cooking and sleeping.  The church had a four-burner stove and refrigerator and two restrooms, but no hot water, no water at all in its kitchen, no shower and no cots. 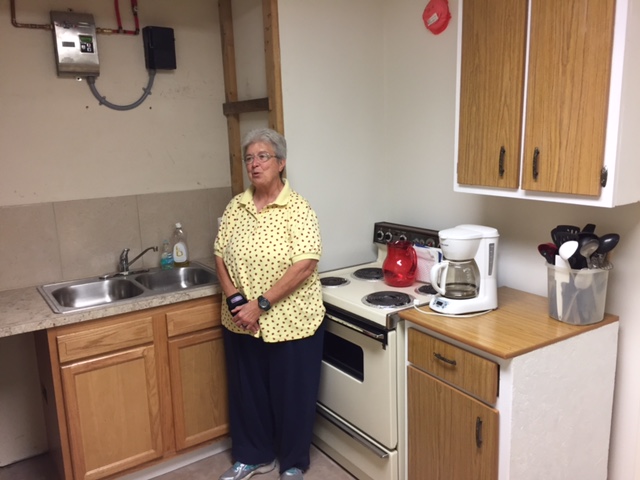 "This is a small congregation in a two-room building – a sanctuary and an all-purpose room, open to view from the narthex," said UCC Florida Conference Disaster Coordinator Bill Wealand.

The congregation didn't allow what it lacked to stop it from saying yes to playing an important role in its neighbors' recovery from the hurricane's ravages, especially the flooding when the St. Johns River surged over its banks.

UCC of St. Augustine's pastor the Rev. Donna Cooney said, "We are delighted, honored and humbled to be part of this ministry, which helps our neighbors."

"Several of us got to work to get the church ready," Wealand said.  "A long-term recovery group member organized local volunteers and provided construction materials.  They installed a kitchen counter and sink, along with a hot water heater and the essential pipes and electricals." (UCC of St. Augustine member the Rev. Judy Johnson in the newly equipped kitchen, right.)

The Salvation Army has provided a shower trailer, and supplied 12 cots. 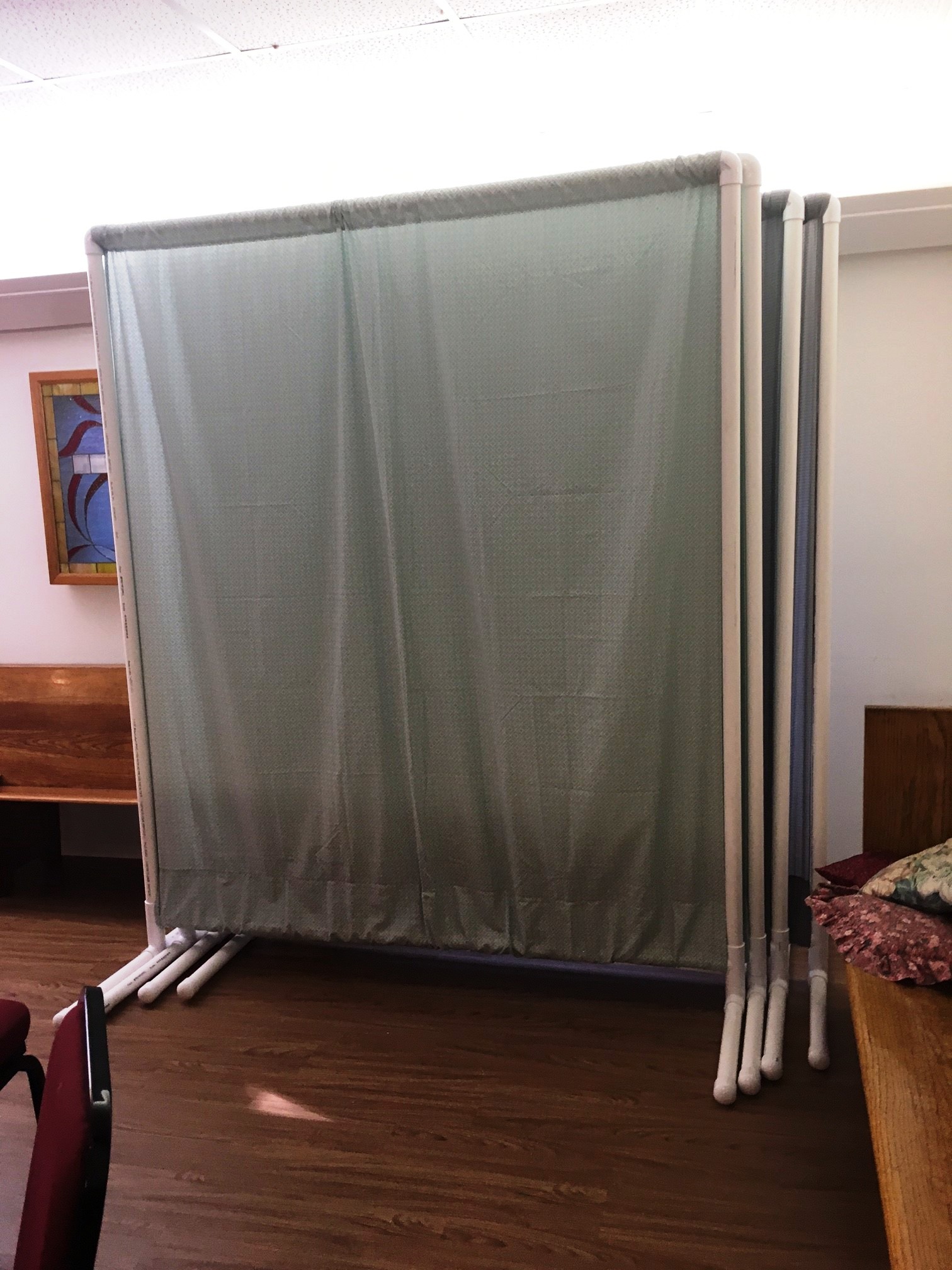 That left just one need unmet - privacy screens to separate the men's and women's sleeping areas.  Instead of spending $200 each on four to six ready-made screens, one volunteer created four PVC frames, and another sewed hems in sheets to slip onto the frames.

Granville UCC work team leader Bruch said that congregation has been deploying work teams regularly since Hurricane Katrina.  Members also have helped on several occasions with relief and recovery in their own tornado-prone area of Illinois – most recently in Ottawa and Naplate, where a February 28 tornado killed two and damaged more than 200 homes.

The team that served in St. Augustine included UCC, Lutheran and Catholic church members.  A couple team members slept at the home of former members of the Granville UCC who retired to Florida.  The rest stayed at the UCC of St. Augustine.

"We drove down to Florida together in two vehicles," Bruch said.  "We enjoy working together, then cooking and eating together."

For her part, Cooney said that "each week at the close of worship, we remind ourselves and each other that we are blessed, and that we are blessings. Sharing our space is one way of living this blessedness out. Thank you for this holy work which leads to wholeness."