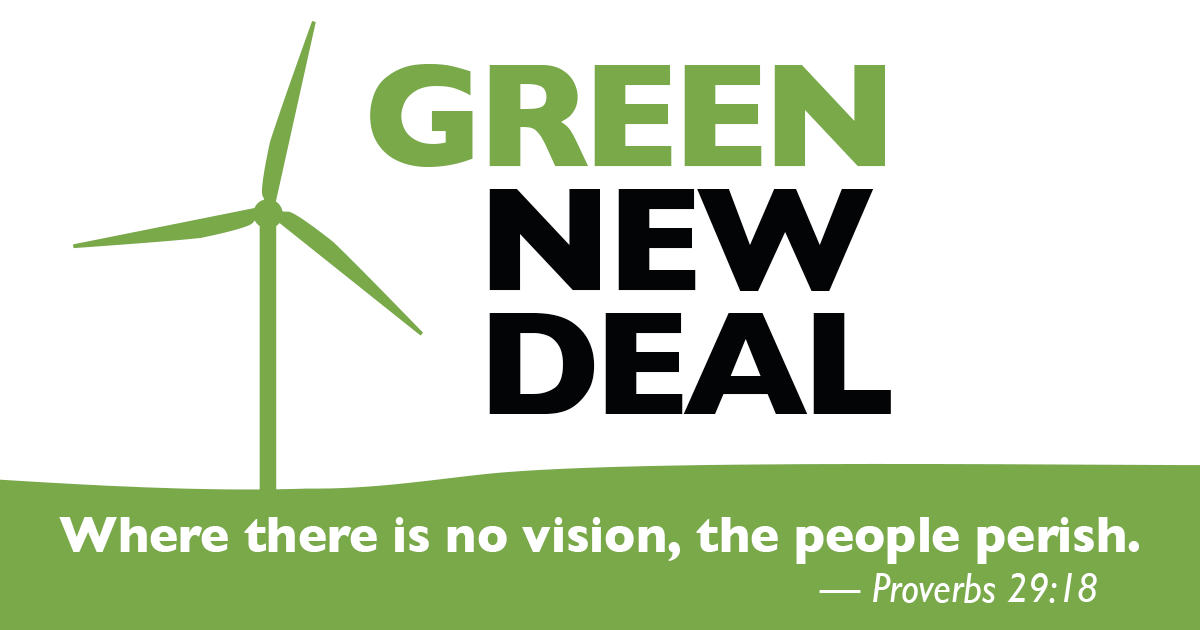 Delegates to the United Church of Christ General Synod could be asked to live out their love of creation when they assemble in Milwaukee in June. They may consider a late arriving resolution which calls for the endorsement of Congress’ Green New Deal Resolution (GND).

The UCC’s Vermont and Pacific Northwest Conferences just submitted a late-arriving resolution to the Committee on Disposition which supports the GND. If it moves forward, the resolution would call on church settings to proclaim that the earth is the Lord’s not ours to wreck; that an urgent environmental crisis demands immediate attention; and that tackling climate change requires a transformation of the economy to address both economic and racial injustice.

The Green New Deal was first endorsed by the UCC’s National Leadership when it was introduced in Congress in February, after the deadline for regular Synod resolutions. The Pacific Northwest and Vermont Conference bodies voted at their annual meetings on Saturday, April 27, to submit an emergency Resolution of Witness, permitted by the Standing Rules of the 32nd General Synod, to consider a church-wide endorsement.

Let Justice Roll Down — Declaring Support for the Green New Deal and Affirming the Intersectionality of Climate Justice with all Justice Issueswas written by the Rev. Jim Antal, special advisor on climate justice to the UCC General Minister and President.

“Concern for the integrity of creation, the protection of the environment, and climate change have been central to our UCC identity for decades – and addressing climate change is at the core of the Green New Deal,” said Antal. “Our denomination also has a centuries-long concern for racial injustice and economic inequality. And for me, the most astonishing thing about the congressional resolution is that it uses exactly the kind of justice language we in the UCC have been using for decades.”

“The Pacific Northwest Conference hearing committee unanimously recommended the resolution for consideration and approval,” said the Rev. Meighan Pritchard, pastor of Prospect UCC in Seattle and the measure’s lead proponent. “At the hearing discussion, people were enthusiastic about specific ways to transition away from fossil fuels and to decrease our carbon footprints. They know we need to take significant action right away and were happy to support this resolution.”

“We are proud to sponsor this resolution because it is directly in line with our justice commitments as a Green Justice Conference. It is also very much in line with Vermont as a state with strong commitments to reducing our carbon footprint,” said the Rev. Lynn Bujnak, Vermont Conference Minister, who noted that composting will be mandatory in Vermont in January of 2020. “Many delegates (at the annual meeting) spoke eloquently about climate change and the need for the UCC to lead the way at this time.”

The Green New Deal (GND), introduced in Congress on Feb. 7, (H. Res. 109) aspires to address crises in climate change and economic inequality through renewable energy and more efficient use of resources. Its goals — cleaner air and water, net-zero greenhouse gas emissions, and the creation of new jobs. And like the President Franklin Roosevelt’s New Deal in response to the Great Depression, it calls for social and economic reform. The GND prompts the federal government to address the injustice of climate change in a way that also tackles the “systemic injustices” that disproportionally affect “frontline and vulnerable communities.”

The Vermont Conference Minister cited the UCC’s commitment to justice as another reason delegates at the annual meeting voted overwhelmingly to send the late-arriving resolution along for consideration at General Synod. “One of the things that excites us the most is the intersectionality of the Resolution,” Bujnak said, “linking climate with so many of our other justice commitments.”

Antal and the Rev. Brooks Berndt, UCC minister for environmental justice, believe communities of faith need to lead on this issue.

“One of the gifts people of faith bring to the broader climate justice movement is our ability to articulate what fundamentally motivates people to seek justice. We can give voice to an active sense of calling that is often rooted in love: love of neighbor, love of children, love of creation,” said Berndt. “We have a tremendous opportunity to be vessels and conduits of God’s love in a world that is contending with so many different forms of injustice.”

The Committee on Disposition will determine at its June 20 meeting if Let Justice Roll Down — Declaring Support for the Green New Deal and Affirming the Intersectionality of Climate Justice with all Justice Issues meets the qualifications of a late-arriving resolution and if it will be put before General Synod delegates, sent directly to an implementing body, or to the United Church of Christ Board.

“Proverbs reminds us that ‘where there is no vision, the people perish,'” Berndt said. “This is our chance to be part of casting a broad vision that is so desperately needed today.”