UCC has met the goal! 50 earthquake-resistant homes in Nepal 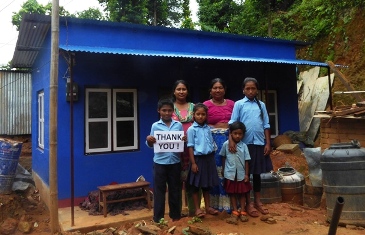 “Forty homes already have been completed, and the rest are underway,” confirmed Ryan Iafigliola, Director of International Field Operations with UCC Disaster Ministries’ partner in Nepal, the Fuller Center for Housing.

“This is out of 74 new homes completed by the Fuller Center since the earthquake. We’re happy to help you celebrate the UCC’s role in this work. You deserve it!”

UCC Disaster Ministries Executive Zach Wolgemuth said, “From day one our aim has been to respond in a way that is sustainable and ensures that families and communities do not suffer the same fate if there were to be another earthquake. There have been plenty of challenges but we’ve never given up and I have personally seen what proves to be a lasting impact on families and communities where we are working.

“While the Fuller Center does not respond to disasters,” he added, “we partnered with them because they had already been working in Nepal pre-earthquake and I knew we could couple their development expertise with our disaster expertise, in true partnership, to do something amazing.”

Before being selected to receive a new house, Thuli Mijar said, “Even with all problems we are living our life but when it is too much for my grandchildren … I feel, ‘Why I can’t do anything for them?’”

Wolgemuth added, “We wanted to hold the Nepali government accountable for the funds they had received from the international community and insisted that this money be used first so that we could leverage our response accordingly.”

“The UCC funds helped to wrap around that program, giving funds that would help families to complete their homes and helping families that the government program missed,” he said. “As a result, we didn’t spend the full $3,000 on some of the rural homes, which means that the UCC funds will end up assisting over 50 families rebuild.”

“The building materials such as stone may appear to be the same as before the earthquake, but using better techniques and being more selective with stones allows them to have improved earthquake strength,” Iafigliola said.