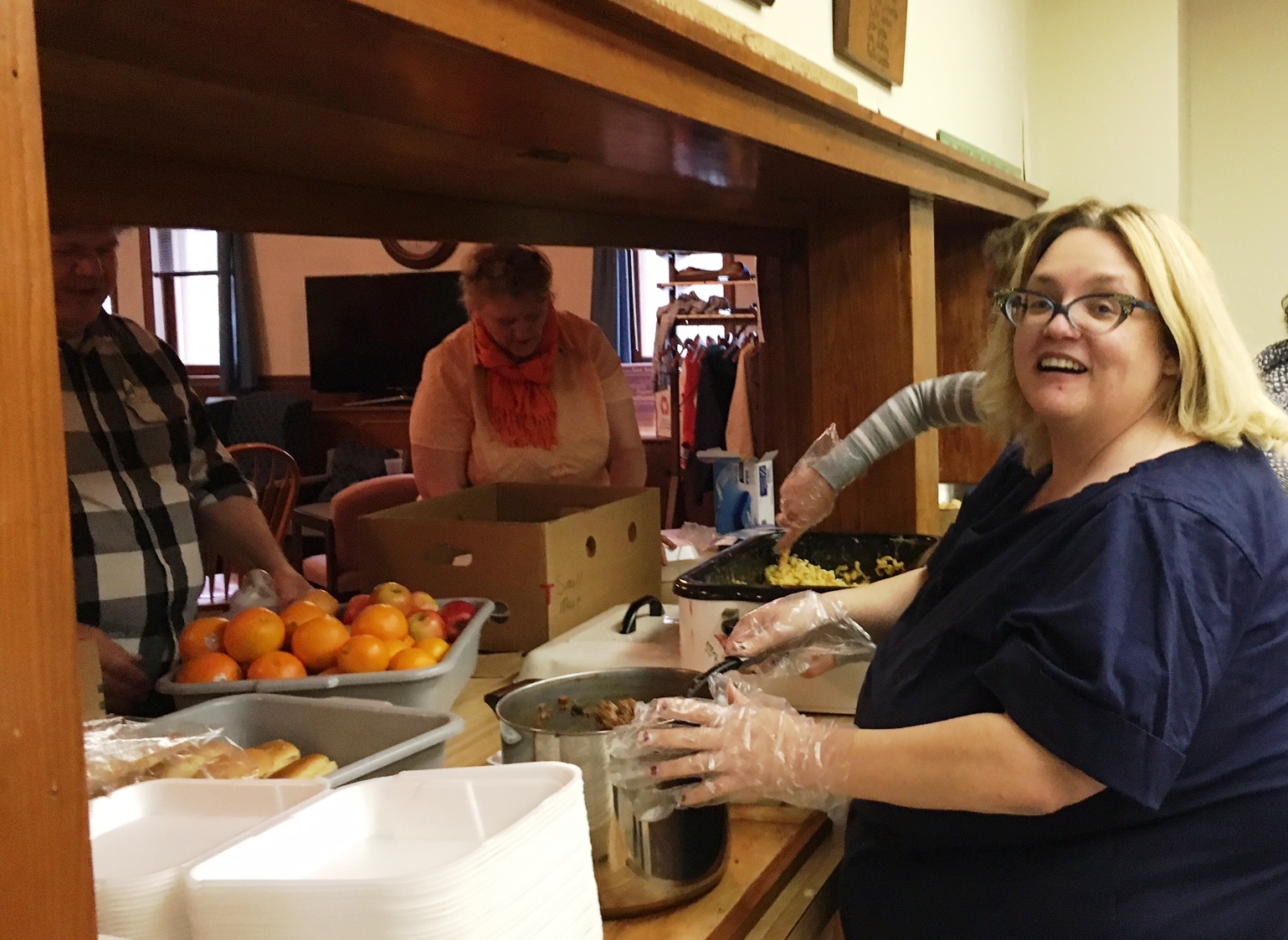 "Feeding is something we do," said the congregation's moderator-elect, Heather Francis.  "We talk about both spiritual and literal nourishment here."

For example, the church – with 45-50 average attendance for Sunday services – provides a free community meal once a month, and opens its kitchen and fellowship hall to the YMCA's annual summer day camp for its meals.

"We're quick to deliver meals to members recovering from illness or surgery.  And we love a good potluck!" Francis said.  The church's kitchen is even certified by the county health department.

So it's no surprise that, after a tornado struck Naplate and Ottawa, Ill., February 28 – killing two, damaging more than 210 homes and knocking out almost everyone's power – Open Table UCC stepped up promptly to meet affected residents' need to eat.

"On March 1, with the help of a spontaneous donation from the Community Food Basket food pantry, we prepared and packed up 450 individual meals," Francis said.  "That Saturday, March 4, with the help of about 75 volunteers from our church and community – including 50 from the Latter-Day Saints Church – we served 1,000 meals."

Open Table UCC kept on, preparing meals (volunteer Kelly Meagher pictured above) every day until March 13, working directly with The Salvation Army disaster relief coordinator for the region to respond to needs for meals in both Ottawa (population 18,500) and Naplate (population 523). 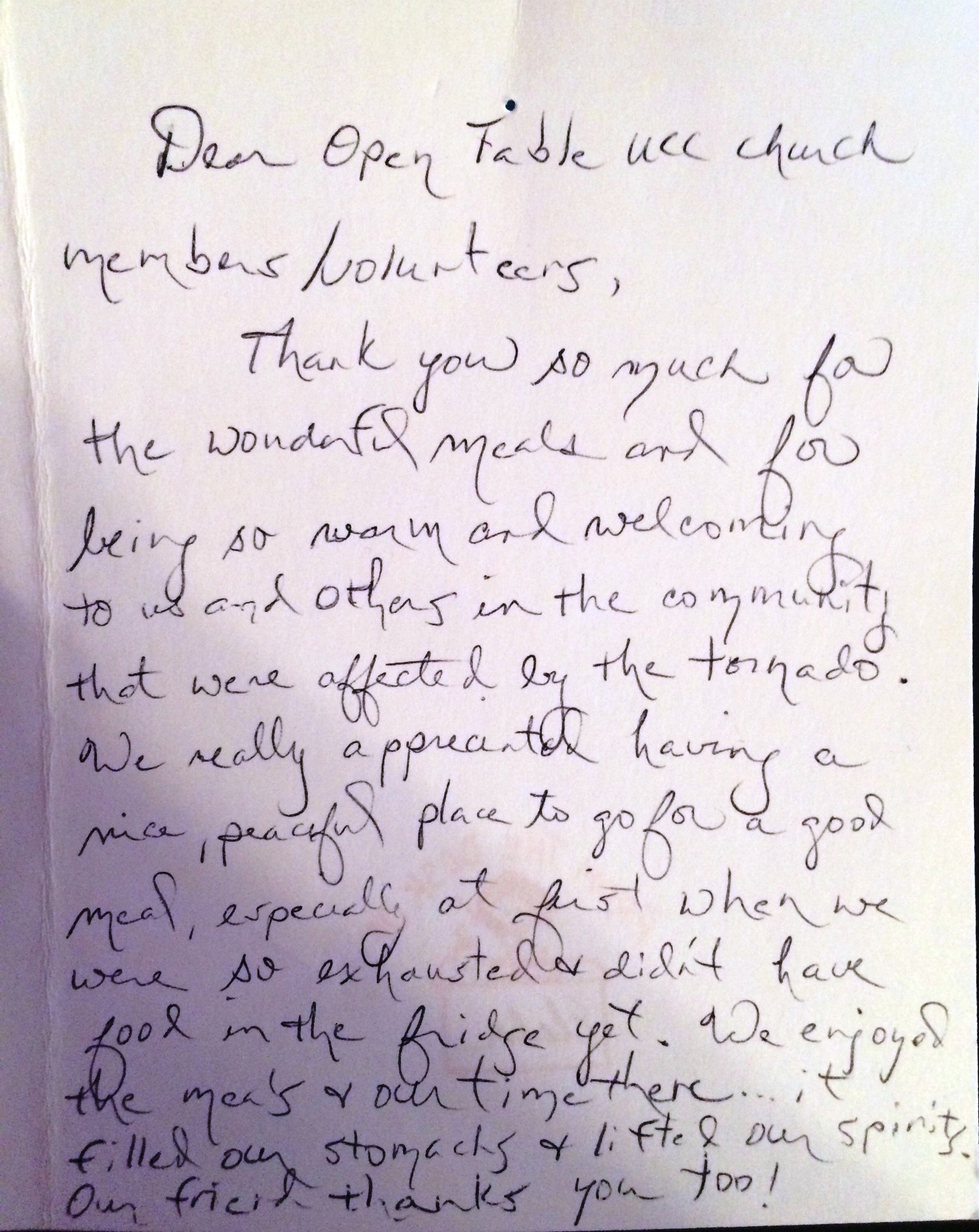 One day, the Rev. Rosa Yeonshin Lee, a United Methodist pastor serving at Northern Illinois University in DeKalb, drove over with 75 bratwurst and buns leftover from the Mardi Gras party of the Hungry Huskies ministry (named for NIU's sports mascot).

"Monday lunch was our last," Francis said.  "In just under two weeks, we had served 3,000 meals with the help of a grand total of 180 volunteers."

In support, the UCC Illinois Conference and its Disaster Ministry each gave Open Table UCC $500 and the UCC National Disaster Ministries approved a $3,000 solidarity grant, to help cover the congregation's extraordinary costs.

Not incidentally, Open Table UCC also opened its doors to the community as soon as the tornado had passed.

"The tornado hit around 4:45 p.m.," Francis said.  "Most of Ottawa was without power that night, but downtown, where our church is located, got its power back.  Our pastor, the Rev. Kim Wood, opened the building in case anyone needed a warm, dry place to stay – or even just to charge their cell phones.

"Our treasurer, Jen Swanson, texted Pastor Kim and me, asking, "Is there anything the church can do tomorrow to help people in our town?  Serve a meal or anything?  Do we know who to contact in town so that we can offer our hospitality and help?"

Francis sent out a Facebook post to let the community know the church had food and refuge.  It read in part, "We will be serving a meal starting at 11:30 a.m. tomorrow, Wednesday, March 1.  ANYONE affected by the storm, including first responders, electrical service workers, and kids who are missing a warm meal since schools are closed are welcome to stop by."  It was shared 550 times and reached 35,000 people, Francis said. 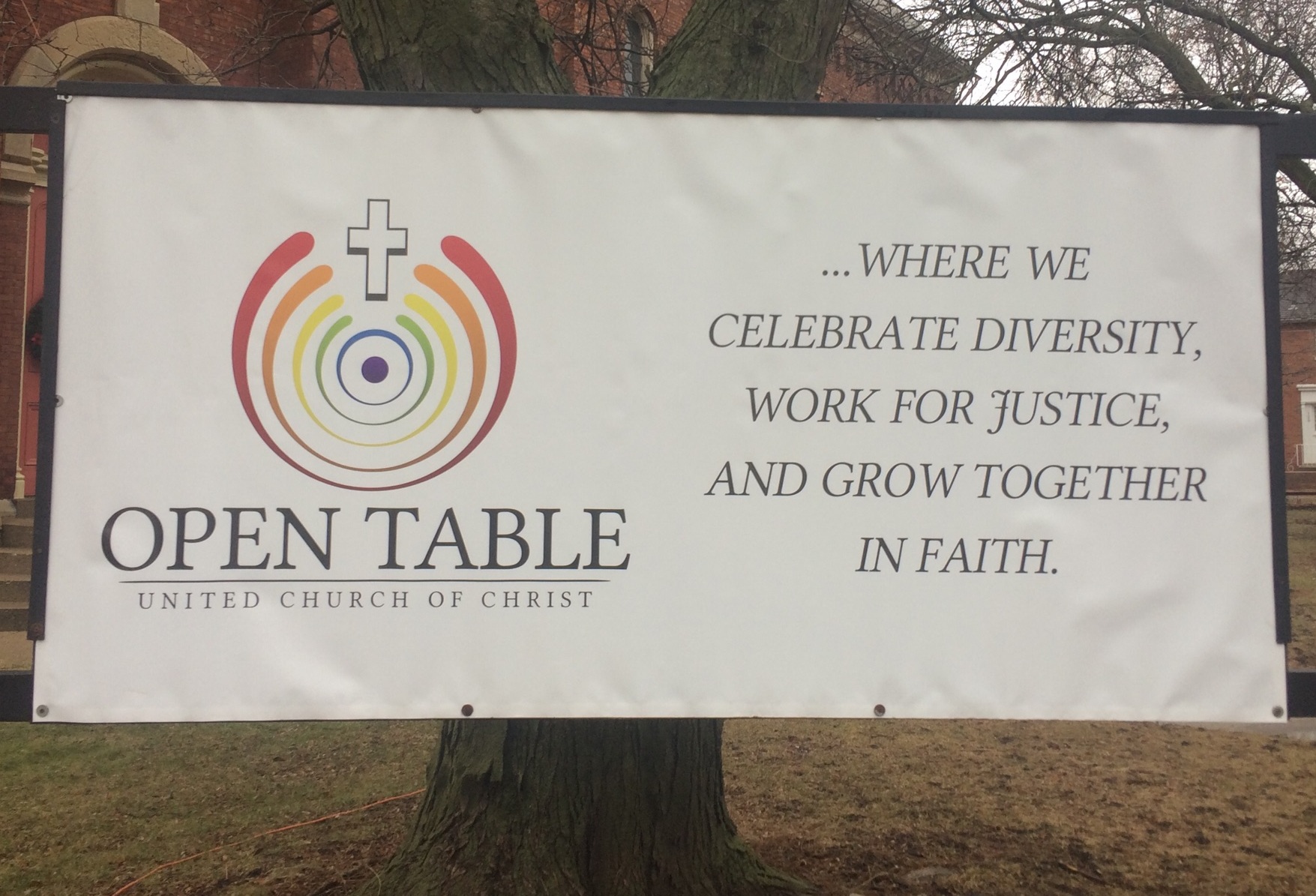 Most meals were delivered from distribution points – for example, the Naplate Village Hall.  The Salvation Army took sack lunches to affected areas, and some meals were kept at Open Table UCC for walk-ins.

Among those walking in were a middle-aged married couple, whose house and vehicle had sufffered damage.

"It's just overwhelming," they told Francis, and added that they were grateful to step away from the chaos and destruction and find some quiet.  "They left a really nice thank you note (pictured)," Francis said.

Another walk-in was a single mother who runs a daycare center in her home.  She recounted how she, the children and parents who had just arrived to pick their children up had to flee to her basement when the sirens sounded.

"She fed them all out of her own fridge," Francis said.  "We helped her replenish her depleted cupboards."

A couple with four children had shopped before the storm, then lost all their food to spoilage in the power outage.  "We invited them to 'shop' our food stocks," Francis said.