Construction of a telescope on a dormant volcano in Hawai’i is sparking protests, dividing communities and has prompted more than a hundred religious leaders to come together in a statement of solidarity, after a group of Native elders were arrested in an act of civil disobedience trying to protect the sacred mountain on the Big Island.

United Church of Christ signers of the solidarity statement include representatives of Pacific Islander and Asian American Ministries, the Hawaii Conference, the Association of Hawaiian Evangelical Churches and pastors and members of several local congregations.

In winter, Mauna Kea’s summit frequently glimmers with the silver of snow, inspiring gasps of wonder. Some say that is the source of its name, “White Mountain.” Others watch its 13,800 feet of majesty silhouetted against the sky and affirm another name: Mauna a Wakea, the “Mountain of the Sky Father,” a partner in the ancient Hawaiian story of creation.

The sky has beckoned astronomers to this location since 1968. Mauna Kea’s height above the clouds, its clear air, its proximity to the University of Hawai’i, and its low levels of light pollution have made it one of the best locations for surface-based observation on the globe. Scientists and technicians have further created a supportive international community that they call a model for the rest of the world.

The authorization of a fourteenth telescope – the Thirty Meter Telescope, with an enclosure eighteen stories tall – has brought these soul-deep forms of reverence into conflict. Members of UCC churches, widespread in the islands, stand on both sides and in between the conflict. Though often portrayed as a clash of traditional religion and science, it is better understood as a struggle between different notions of what is sacred.

On Wednesday, July 17, police arrested 33 kupuna (elders) and a caregiver who had been blocking the access road, preventing movement of construction equipment. These and their compatriots have adopted the name “mountain protectors” from the Standing Rock movement. 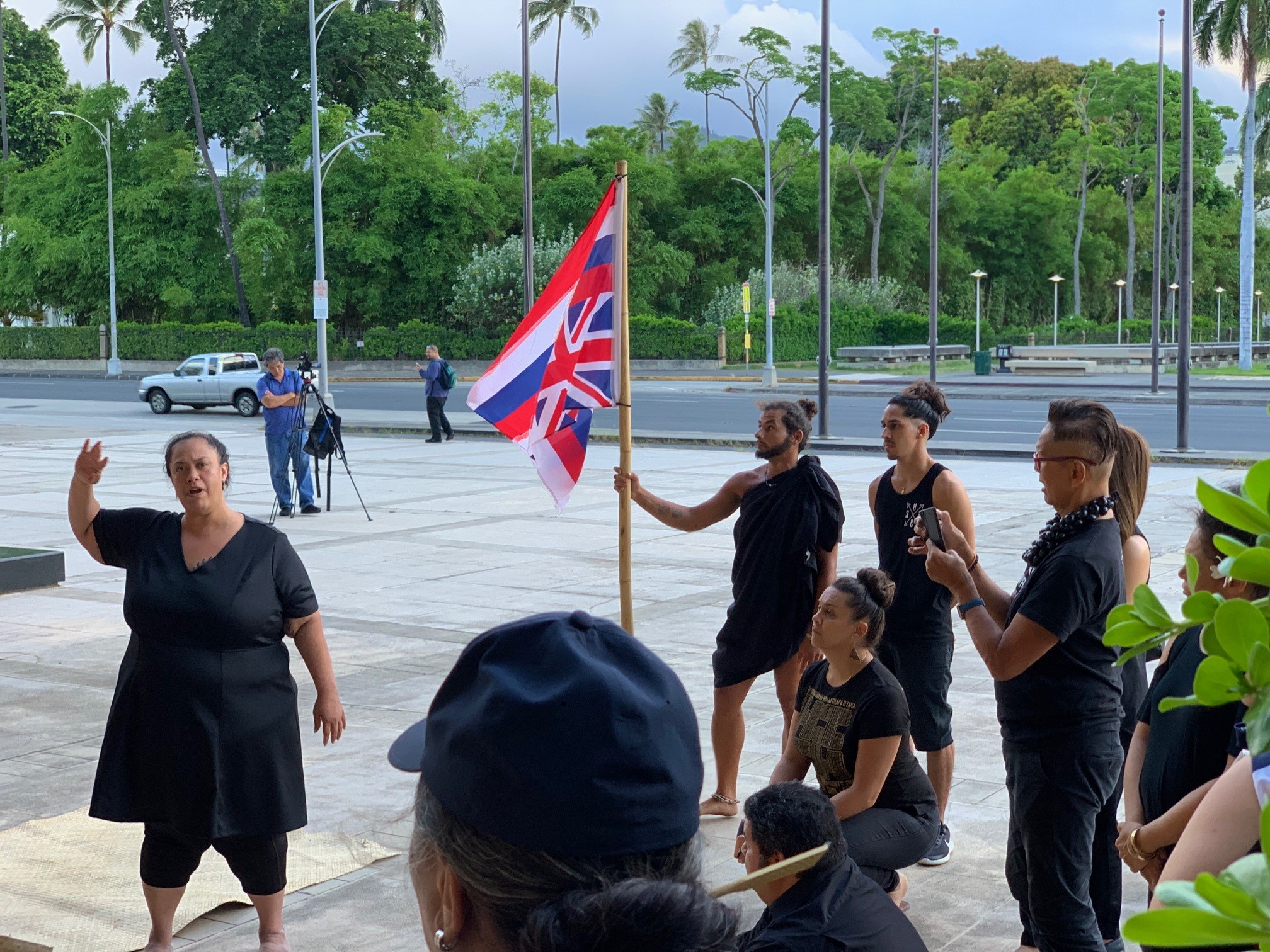 The arrests shook the community and the entire state. Many of Hawai’i’s cultures deeply revere their elders, and the arrests set off larger protests on Maui and in the capitol city of Honolulu on O’ahu. On Hawai’i Island itself, the action was more personal. Officers spoke to the kupuna in tears before taking them into custody. Hawai’i Island has a population of just 200,000 people, which means that family arrested family.

Governor David Ige signed an emergency proclamation the same day that allows him greater latitude and resources. On Friday, he announced that would not use National Guard troops or employ tear gas, but did not rescind the declaration despite growing concern around the state.

Among the nearly 1,000 people gathering July 19 on the Mauna Kea Access Road was Ron Fujiyoshi, a member of Ola’a First Hawaiian Church UCC and a former missionary with the United Church Board for World Ministries. There were no further arrests that day or over the weekend, but neither Fujiyoshi nor anyone else knew so then. Governor Ige visited Hawai’i Island that day, but did not come to the mountain or speak with organizers. He was given a statement from religious leaders calling for a return to discussion and a summons to prayer.

“People don’t realize it’s an injustice. It’s a religious injustice,” said the Rev. Kenneth Makuakane, pastor of Kawaiaha’o Church UCC in Honolulu, and a son of Hawai’i Island. For him, it is not a matter of science versus faith, but of promises made and not kept. Telescopes that were supposed to be decommissioned, he says, remain standing in the precinct adjacent to the summit. He has been participating in daily demonstrations at the state Capitol building, where he reports 60% of passers-by toot their horns in support. 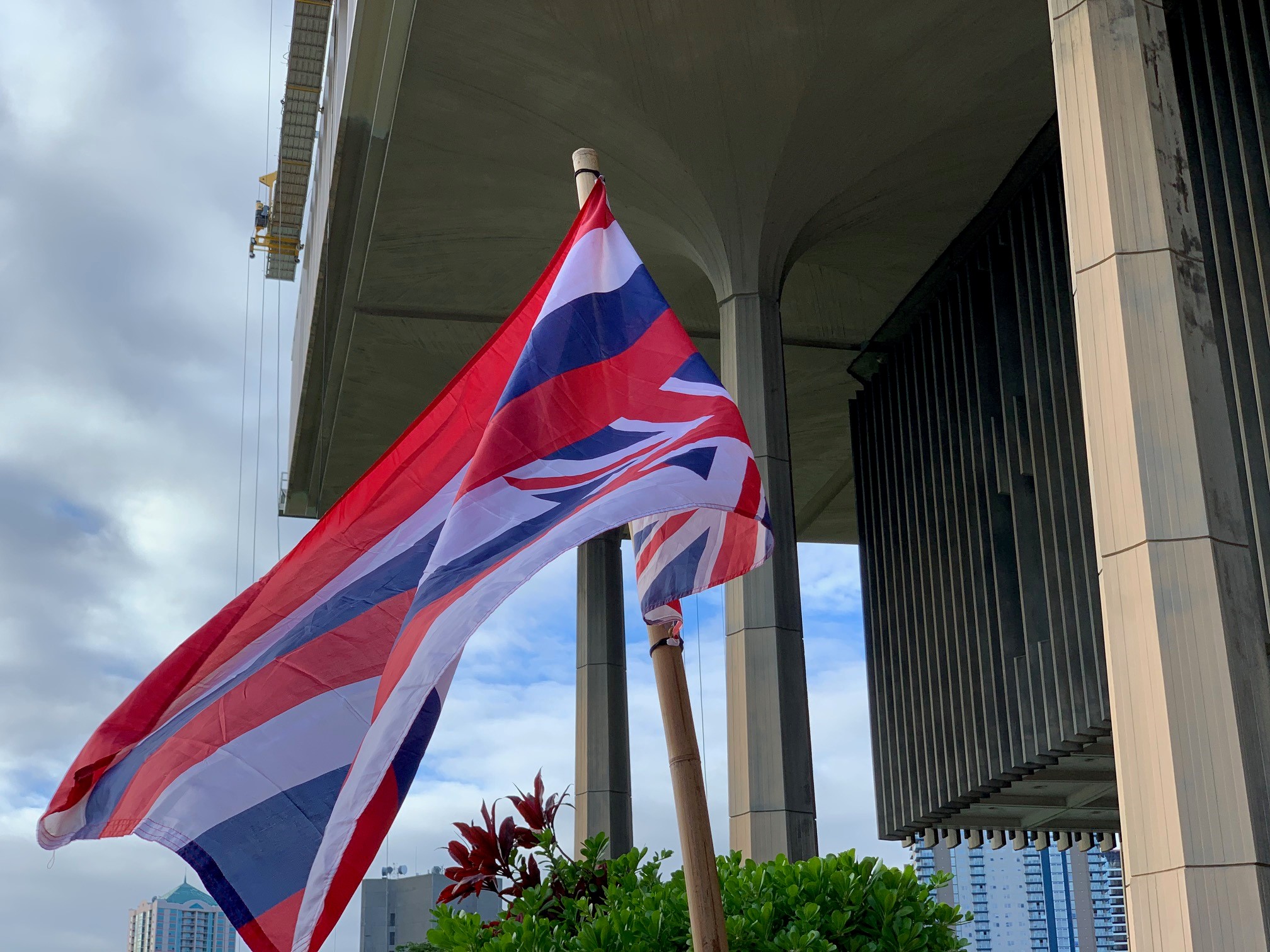 Proponents of the Thirty Meter Telescope (TMT) insist that those voices have had the chance to be heard. The construction permit has been issued, challenged in the courts, put through Department of Land and Natural Resources (DLNR) review, and brought to the courts again. In the fall, the state Supreme Court said it was satisfied that the process had been fair.
In Hawai’i, however, the specter of American colonialism is nearly everywhere. Sailors and Marines from the USS Boston backed the overthrow of the Hawaiian government by a group of wealthy Americans – many of them children of ABCFM missionaries and members of Queen Lili’uokalani’s own cabinet – in 1893. The Hawaiian language was banned from public schools until the 1970s.

The conflict has affected Hawaiians entering the sciences. An organization called PUEO (Perpetuating Unique Educational Opportunities for Hawai’i), led primarily by people of Hawaiian ancestry, supports TMT construction. Some have been subjected to shaming, bullying, and even threats. It would dismay those blocking the access road, who have maintained a standard of “kapu aloha,” a summons to restraint, love, and charity.

This sense of aloha (“love” in Hawaiian) was invoked by other political leaders, including Hawai’i Island’s Congresswoman, Tulsi Gabbard. In a statement on Friday she called for construction efforts to halt and conversation to resume in a spirit of aloha.

Mountain protectors remain camped at the access road six thousand feet up as a second week begins. State officials and police have made no announcements about their plans.

Mauna Kea itself looks down across the ‘aina’ (the land) and up to the stars.

The Rev. Eric S. Anderson is pastor of Church of the Holy Cross UCC in Hilo, Hawai’i and a frequent UCNews contributor.