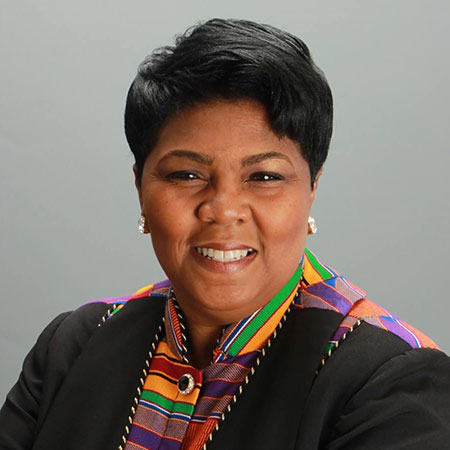 One year ago today I arrived in Orlando, Fla., for what I envisioned to be a trip with a few brief board meetings for the Samuel Dewitt Proctor Conference and a few days of rest and relaxation. Before the plane landed I was bombarded with messages of the horrific murders of forty-nine people in the wee hours of the morning at PULSE, a popular nightclub in Orlando that catered to the LGBTQIA community. I left the airport and headed to PULSE but was unable to get close to the nightclub because it was still an active crime scene.

A lone gunman had entered PULSE, as people laughed and danced into the early morning, and suddenly turned celebration into sorrow. Over the next few days, shock, disbelief, overwhelming grief, helplessness, and also LOVE filled the atmosphere in Orlando and reverberated throughout the world.

I remember gathering at a small MCC church, JOY MCC, whose pastor, Rev. Terri Steed, opened their doors to hold sacred space to grieve for those who did not want to be alone. I arrived filled with anger. I arrived tired of these types of assaults on humanity. I arrived fed up with those who think it is their right to kill, maim, and destroy those with whom they differ. I want to say those with whom they have no connection but the truth is we are all connected. Perhaps it is this impermeable truth that fuels such evil.

I went still nursing the wounds of nine black people killed during Bible study at Emanuel AME Church in Charleston, N.C., one year earlier. I was still shaking from the reckless and wanton disregard for black life that made a police officer in Ferguson, Mo., feel entitled to kill Michael Brown, Jr., igniting one of the largest acts of communal resistance in recent times. I was angry.

And yet what I encountered in church that night was love. Love as the ultimate weapon against evil. Resilient, Defiant, Relentless, and purposeful LOVE. One of the members said to me, through tears, that she believed this gunman had lost his love and our greatest act of resistance must be to not lose ours. That challenge has remained with me over this year. How does one lose one’s love and what does a resistance built on holding on to love actually look like?

Well, I believe we lose our love when we seek to disconnect our humanity from others. This battle of connection is as ancient as this world. There are religious documents of disconnection, like the Doctrine of Discovery, woven into the formation of civilization. There are demonstrations of disconnection among them, the Trans-Atlantic Slave Trade, the Trail of Tears, and the Holocaust, legitimized on platforms of dehumanization and hatred. There is institutionalization of disconnection forged through the segregation laws of the past and the immigration policies of the present. And even now, even knowing the death and devastation losing our love can cause, our current administration seeks to take us back to an America that was not great. Our current administration seeks to roll-back the advances made in the eradication of harmful policies. Shortly after Inauguration Day 2017, most mentions of LGBTQ advances in this country were scrubbed from federal websites. President Trump has also rescinded guidance to public schools regarding transgender students. Proposed religious freedom bills, under this administration, are neither religious nor righteous. The disconnection and attempted dehumanization of any people is never a godly act.

So today, I choose to remember the murdered and wounded victims of PULSE nightclub by continuing to fight for LOVE.

And I am not alone. The Rev. John Dorhauer, General Minister and President of the United Church of Christ, showed up in Orlando one year ago along with the Rev. Michael Schuenemeyer, Executive Director of UCAN and Minister of Health and Wholeness for Justice & Witness Ministries, to work directly with UCC churches already engaged in Orlando, and to bring the full weight of our denomination to bear on the health and wellbeing of our LGBTQIA family. And we were not alone. We joined our strength and commitment to that of the multitudes of those fighting for Love in Orlando, in our nation, and all over this world.

Fifty people died in PULSE nightclub in the wee hours of the morning one year ago. Forty-nine of them were murdered. One lost his LOVE.

The Rev. Traci Blackmon is a United Church of Christ national officer and acting executive minister of Justice and Witness Ministries.