California congregation committing to ‘Community Safety for All’ on Good Friday

During Good Friday worship, the people of First Congregational Church of Oakland will hold a ‘Seven Last Words’ service to mark one of the holiest days on the Christian calendar. But instead of preaching on the seven last words of Jesus before he died on the cross, worshippers will be sharing the last words of seven people who have been killed in this country by the police.

“We’ve been hearing from the community that people need a place to grieve, so we’re hoping to provide one such space, as well as to lift up and honor the lives of those lost to contemporary crucifixions,” said Nichola Torbett, one of the lay leaders of the downtown Oakland, Calif., congregation. “We recognize that Jesus was killed, not for anything he did, but for who he was, and we see the same happening to Black and Brown people today.”

The small church, diverse in race, gender identity, sexual orientation and economics, is committed to finding justice for all people. As Marcia Lovelace, another lay leader, said, “We were a dying urban church that has stayed alive because of our willingness to create this version of Beloved Community with a deep and abiding commitment to justice-making and a willingness to face where we fail at justice within our own walls—even when it hurts.”

That commitment led First Congregational to join Showing Up for Racial Justice (SURJ) and the ‘Community Safety for All’ campaign.

The national organization began in 2009, as active accountability to people of color against white supremacist organizing. White Americans asking white Americans to continue to mobilize to dismantle supremacy and privilege. ‘Community Safety for All’ invites congregations to examine their relationship to policing and to invest in community safety alternatives. The campaign asks churches and other faith communities to think about the ways they utilize policing, and to develop a process to imagine and invest in new ways to care for their neighbors.

“It’s a big ask,” said the Rev. Anne Dunlap, a UCC minister in Denver, Colo., who is coordinating the campaign as the National Faith Organizer for SURJ.

“We are not meant as followers of Jesus, to deal with conflict with a system of violence, which we see policing to be in this country,” Dunlap said. “We are asking people to imagine love more broadly, that includes everyone in the community so that no one has to participate in systems of violence.”

Dunlap joined SURJ out of concern about racial profiling and police brutality against people that she loves. She hopes this campaign creates a faith commitment to find ways to use love to solve problems in localities around the U.S.

“We want congregations to first understand the history of policing in this country, on this continent, and the connection of policing to the enforcement of white supremacy,” Dunlap continued. “Together with that, to reflect on how our religious institutions, whether that is denominational bodies or local congregations, how we uphold the system of policing—how we use police as churches. When do we call the police instead of looking at other options of resolving conflict? We hope faith communities imagine and enact alternatives for community safety that do not rely on policing. Not just study the issue, but taking action to embody something different.”

“The role of police is to preserve order. Most Americans would agree with that statement,” Torbett said. “The problem is that the existing order that they are preserving has white supremacy baked into it, and until that is completely transformed, the police cannot help but enforce white supremacy. We are not convinced that an institution designed to police Black, Brown, and working class bodies can be reformed into an institution that serves justice. We believe we need a whole new approach to community safety.” 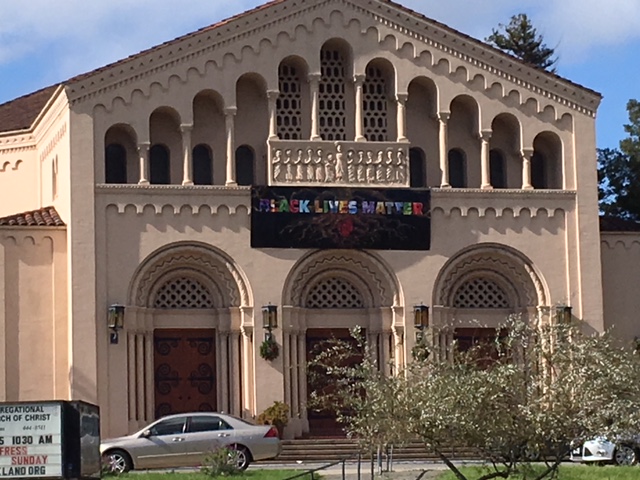 First Congregational in Oakland is one of three California UCC organizations involved in ‘Community Safety for All’.

“It is personal for us,” Torbett continued. “As a multiracial congregation in a neighborhood that is rapidly gentrifying, it has been risky for our Black and Brown members to come to church because they might be perceived by someone as a threat. When we decided to hang a Black Lives Matter banner on the front of the church, we challenged ourselves to live into that claim. Participation in this campaign is part of that process. For our white members, this is a form of repentance.”

On Good Friday, the church will publicly commit to change. First Congregational plans to organize church members, groups that rent space in their building and neighbors into conversations about what safety is, what the difference is between safety and comfort, and how people can work together to keep each other and everyone who passes through the neighborhood, safe. The church plans to work with community partners to organize training in de-escalation, in self-defense, in mental health first aid and in companioning. Church leaders also pledge to examine current policies and procedures to see where they require members to call on police—for example, to report an insurance claim—and work to challenge those systems.

Both Lovelace and Torbett pointed out, as white women, they realize they have been socialized to outsource safety to the police with no awareness of how that affects communities of color. They see community-based safety initiatives as the alternative to “our reliance on violence done in our names.”

“We have to learn to trust each other,” Dunlap said. “Jesus organized his community to take care of each other, not to rely on the systems of the Roman Empire. Churches and other denominational bodies could have a group look at itself to figure out how to do that. We are asking faith communities to rethink a lot of things. Glad to have these congregations do re-imagining work with us.”