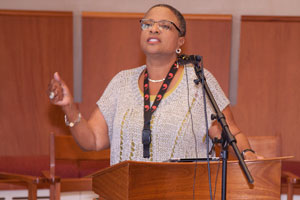 An ordained minister in the United Church of Christ says she will not be intimidated by protests or bow to threats over her speaking engagement in a Baptist college lecture series. Bishop Yvette Flunder, pastor of City of Refuge UCC in Oakland and presiding bishop of the Fellowship of Affirming Ministries, has every intention of fulfilling her pledge to appear today as a lecturer at American Baptist College in Nashville, Tenn.

The college came under fire from a group of Baptist ministers who said the seminary should not invite the openly-gay church leader. Realizing that one of the greatest gifts God gave her is to look past the negativity of others, Flunder is fearless and says she will speak as planned.

"I stopped being afraid a long time ago when I realized that negative, angry, unfulfilled people are not in charge of my destiny,” said Flunder, who is married to spouse Shirley Miller. The couple has been together for 30 years. "God's anointing and favor enables me to rise above negative opinions and to see that there are more people with us than against us. I love living life from this place."

"I am deeply grateful for Bishop Flunder's faithful and tenacious engagement in difficult places," said the Rev. Michael Schuenemeyer, UCC executive for health and wholeness advocacy. "Her leadership exemplifies graceful engagement, grounded in the unconditional love of God. Her bold, prophetic witness to the inclusive nature of the Gospel, together with her disciplined theological scholarship, is worthy of any academic setting."

The school leadership emphatically said it would not reconsider its invitation to Flunder to speak, and that it looks forward to her participation in the Garnett-Nabrit lectures.

"I think that the first thing that we would have people to understand is that Bishop Flunder will be focusing most of her remarks and comments while at American Baptist College on the innovative nature of the ministry that she conducts that addresses the rights and needs of persons with HIV and AIDS,” said Richard E. Jackson, vice president for administration, finance and legal affairs at American Baptist College. "And I think that is completely compatible and consistent with the belief and philosophy of Christian people and Christian institutions to care for the least of us in any given society."

The Rev. Randy G. Vaughn, a minister at Mt. Sinai Baptist Church in Port Arthur, Texas, has stated that he and other Baptist pastors from across the country will gather in Nashville on Wednesday to protest the school's decision for inviting an LGBT person to the lecture.

Flunder believes there is no room in the church to discard people. "The members of The Fellowship of Affirming Ministries and I are speaking to our brothers who would condemn us—not because we are threatened—but because our young people who are same-gender-loving or transgender need to hear our voices,” she said. "Our children and our children's children need to hear that we have made it through the sadness of church rejection and we know that we stand fully clothed in the righteous love of God."