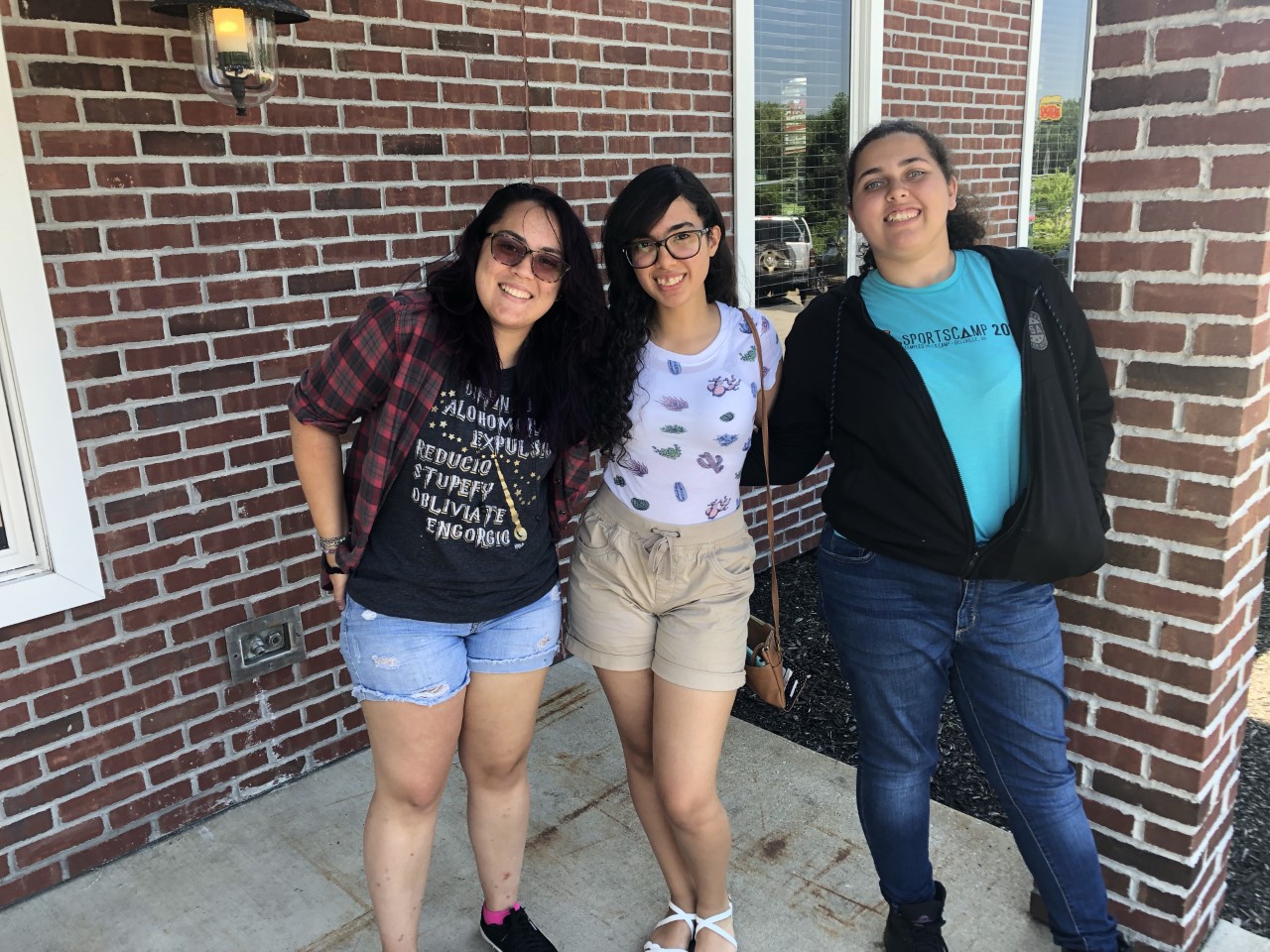 For three college students from Puerto Rico, a stint as program staff at the UCC Ohio Conference’s Templed Hills Camp this summer was so much more than a job to make pocket money for the coming school year.

Among other things, the three young women reported growing in their understanding of leadership and vocation; learning about the United Church of Christ from General Minister and President John C. Dorhauer and Ohio Conference Transitional Minister David Long-Higgins during their visit to camp, and sharing their faith and experiences from their sometimes challenging lives.

“Their coming here was not specifically related to Hurricane Maria,” which devastated Puerto Rico in September 2017, Oyler said, “but did come about from conversations our Conference Disaster Coordinator (CDC) the Rev. David Zerby, had at the annual UCC Disaster Ministries gathering of CDCs in Puerto Rico in April.”

Over the summer, the three served as counselors and pitched in wherever needed – from in the kitchen to painting cabins. They led craft time activities, hikes and games – some from the camp’s traditions and some from their culture and their experiences. And they helped manage a summer-long project to collect and assemble Disaster Ministries Hygiene Kits.

“Our campers and staff enjoyed meeting them and benefited greatly from having them with us this summer,” Oyler said.  “And I truly believe they enjoyed themselves, learned more about themselves and expanded their faith experience as a result.”

MORE ABOUT VALERIA, AMEL AND ALEXANDRA

Valeria, Amel and Alexandra are all active members in congregations of the UCC’s partner denomination, the Iglesia Evangélica Unida de Puerto Rico (IEUPR).

VALERIA, 19, is studying toward a BA in Social Sciences at the University of Puerto Rico, San Juan.  At her home church, Iglesia Evangélica Unida de Naguabo Pueblo, she said, “I’m helping most of the time with the worship ministry, the youth, and when they need some extra hands, I help with the children and community service.”

At Templed Hills Camp, she said, she “learned a lot about patience, teamwork and the importance of communication, and that there is a huge difference between being a boss and a leader. A leader cares for the wellbeing of their team members, which creates a healthy working environment. Having someone just giving orders promotes a toxic work space. I’m thankful because the staff was capable of becoming one body despite our differences.”

Each new group of campers that came for a week at Templed Hills asked, “Were your families affected by the hurricane?” Valeria said.  “My home wasn’t damaged, thankfully. But a month after the hurricane we had to get my brother into a plane since our island’s health system crashed. My little brother has some special medical needs since he was born.

“We were just afraid of having an emergency where we could find ourselves needing a hospital when they were crowded or simply not working, which was the case of most hospitals for months. Currently, he lives in Orlando with my aunt.”

Hurricane Maria also brought job instability for many families, Valeria added.  Her father – an engineer, mechanic and electrician – works for a hotel “that was mostly destroyed by the hurricane. That means less working hours and less income in a moment where we were worried about our electricity, our food and my education. The hotel is still recovering but is not open to the public. It is stressful and terrifying.”

AMEL, 19, is a social work major at the University of Puerto Rico in Rio Piedras. At Iglesia Evangélica Unida de Puerto Rico de la Calle Arzuaga in San Juan, where her father is pastor, she is active in the congregation’s music and social services ministries. The latter offers food, clothing and a Sunday breakfast and early service especially for homeless people.

Listing the varied assignments at Templed Hills, Amel noted that one of her favorites was serving as counselor to “six wonderful girls” who had come for Sports Camp.

“I even had to move into the same room,” she said. “If I were given the chance to be a counselor again, I would certainly accept, because it’s a bond you cherish even if you’re no longer with that group physically, and you can make great memories that way.”

“Summer camp is quite fun!” Amel said. “You can be closer to God’s creation and make new friends and amazing discoveries. The entire atmosphere is very welcoming, and you’ll have stories to tell your loved ones when it’s over.”

To campers’ questions about Hurricane Maria, Amel said she described “all the months we went without electricity, having to survive with a generator and taking certain measures with what was bought to make food. The structure of our home was left intact, save for a little bit of water and the tall tree next to our house having a large chunk dangling for a long period of time until it finally plopped down, which thankfully didn’t result in any damage.” 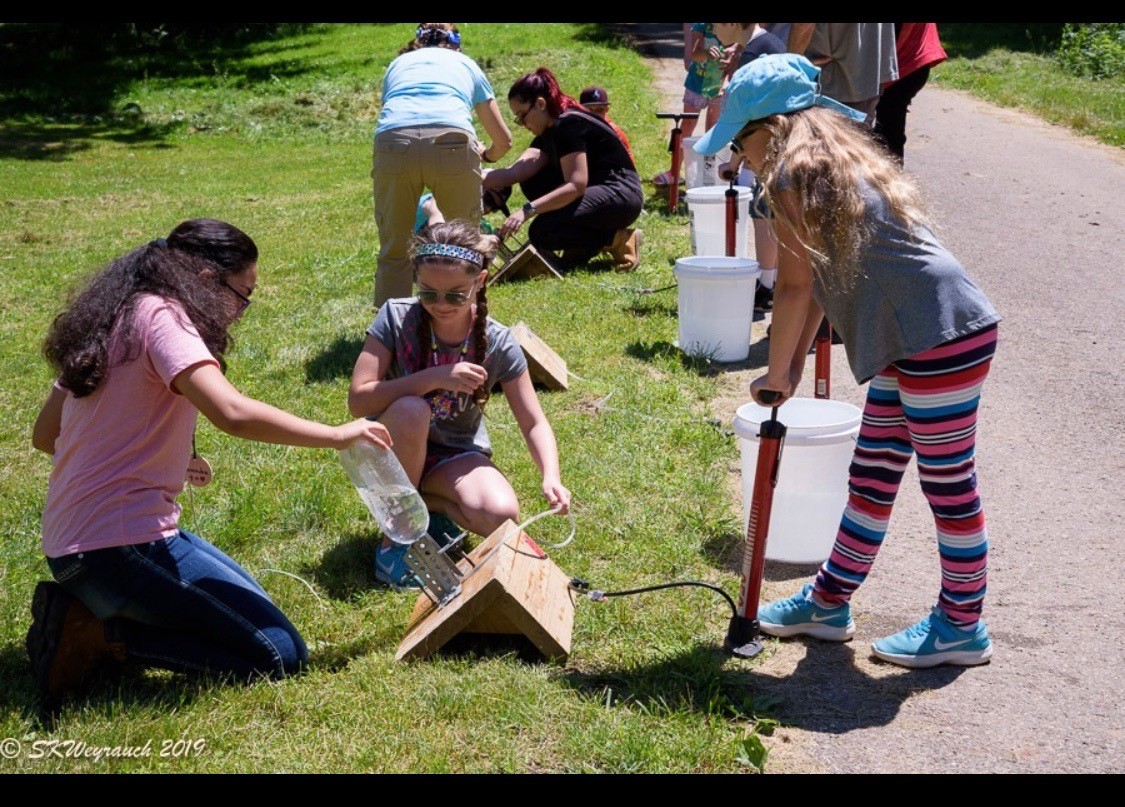 “I never thought I would have an opportunity to travel until my uncle spoke to my mom about a possibility of going to Ohio,” she said. “At first, I didn’t believe it, but God knows what He was doing.

“I really loved helping with the craft activities and hikes,” Alexandra said. “It helped me to elaborate leadership and to stop doubting my capacity. It was awesome to share with the campers. They were so curious to know about us, especially the little ones! I really enjoyed their company through the summer.”

But the “icing on the cake,” so to speak, for this culinary arts student was getting to help in the camp kitchen. “I was so happy about it!” she said.

Alexandra’s Hurricane Maria story is a harrowing one. “My sister and I barely slept because of the loud whistling of the wind and the thunder.” She described seeing her parents struggle to push out the ocean water that was getting inside the house.

“When the hurricane ‘ended,’ the worst started, where we had no light, no water, and we barely had food in our island,” she continued. “Like the rest of the people who decided to stay on the island, we fight to survive and do the best with what we have.

“Working at camp this summer really was the best thing that happened!” Alexandra said. “God knows the struggles that were in my family that time, and I think that was one of the reasons I needed to leave home for a while.

“I was kind of concerned that I wasn’t going to be accepted in the (mainland U.S.) society. However, I didn’t just get accepted; I got a family. People made me laugh, cheered for us, and supported me even in my saddest moments. All the people I got to meet at camp are a great part of my heart. I’m really hoping to see them again sooner or later!”

Oyler concluded, “I am so grateful for the support and assistance we received from Angel Cepeda and Lydia Rosaly from Iglesia Evangelica Unida de Puerto Rico, and the support received from the Rev. Mary Schaller Blaufuss of the UCC's Humanitarian and Development Ministries, who funded the three counselors’ travel.

“This opportunity for shared ministry would not have happened without their swift and attentive willingness to facilitate this experience. I look forward to seeing where God leads us to next through this covenantal partnership.”