Holy Communion: A Practice of Faith in the United Church of Christ 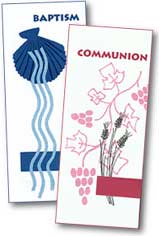 "Communion" is one of 11 introductory brochures from "Practices of Faith in United Church of Christ" published by Local Church Ministries. Other brochures in the series cover Holy Communion, confirmation, gifts of ministry, healing and reconciliation, marriage, mission, prayer, scripture, stewardship, and working for justice. To order the complete set for your congregation, ask for EP128 from United Church of Christ Resources at 800-537-3394.

"In accordance with the teaching of our Lord and the practice prevailing among evangelical Christians, the United Church of Christ recognizes two sacraments: Baptism and the Lord's Supper or Holy Communion."

"The Lord Jesus on the night when he was betrayed took a loaf of bread, and when he had given thanks, he broke it and said, 'This is my body that is for you Do this in remembrance of me.' In the same way he took the cup also, after supper, saying, 'This cup is the new covenant in my blood. Do this, as often as you drink it, in remembrance of me.'"

"When Jesus was at table with them, he took bread, blessed and broke it, and gave it to them. Then their eyes were opened, and they recognized him."

"Here, O my Lord, I see you face to face; here would I touch and handle things unseen. Here grasp with firmer hand the eternal grace, and all my weariness upon you lean."

What is a Sacrament in the United Church of Christ?

Sacraments are ritual actions in worship which, according to Scripture, were instituted by Jesus. In the sacraments of baptism and communion we ask the Holy Spirit to use water, bread, and wine to make visible the grace, forgiveness, and presence of God in Christ.

The origin of Communion

The communion meal recalls the table fellowship Jesus shared with his disciples, and in particular the Last Supper on the night before his death as well as his appearances to the disciples during meals following his resurrection. Throughout its history these Biblical events have been central to the Church's worship life.

The meaning of Communion

In the sacrament of Holy Communion, also called the Lord's Supper or Eucharist, meaning "thanksgiving," Christians hear, taste, touch and receive the grace of God revealed through Jesus Christ in a unique way. Communion is:

a joyous act of thanksgiving for all God has done, is doing, and will do for the redeeming of creation;

a sacred memorial of the crucified and risen Christ, a living and effective sign of Christ's sacrifice in which Christ is truly and rightly present to those who eat and drink;

an earnest prayer for the presence of the Holy Spirit to unite those who partake with the Risen Christ and with each other, and to restore creation, making all things new;

an intimate experience of fellowship in which the whole church in every time and place is present and divisions are overcome;

a hopeful sign of the promised Realm of God marked by justice, love and peace.

The United Church of Christ Book of Worship reminds us that "the invitation and the call [to the supper] celebrate not only the memory of a meal that is past, but an actual meal with the risen Christ that is a foretaste of the heavenly banquet at which Christ wi11 preside at the end of history."

What elements are used? What do they mean?

The broken bread and poured wine represent—present anew—the crucified and risen Christ. The wheat gathered to bake one loaf and the grapes pressed to make one cup remind participants that they are one body in Christ, while the breaking and pouring announce the costliness of Christ's sacrifice for the forgiveness of sin. Some churches provide non-alcoholic and gluten-free elements. As we grow increasingly aware of the rich cultural diversity of the church, the use of elements other than bread and wine is becoming an issue for global ecumenical reflection.

What words are used?

The Book of Worship and The New Century Hymnal contain several liturgies for the celebration of Holy Communion. In addition, many liturgies from ecumenical and global sources are frequently used. At the heart of the service are Jesus' words about the bread and the cup from the Biblical account of the Last Supper.

How is Communion served?

A variety of practices are found in the United Church of Christ, including the sharing of a common loaf or the use of individual wafers or cubes of bread and the sharing of a common cup or of individual cups either at the Table or in the pews. Intinction (dipping the bread in the wine) is also an acceptable practice. Care should be taken to ensure that the full meaning of the sacrament is communicated by the way the elements are used and served. The pastor presides at the Table, normally assisted by elders or deacons.

Who may receive Communion?

In most United Church of Christ local churches, the Communion Table is "open to all Christians who wish to know the presence of Christ and to share in the community of God's people." (Book of Worship). Some visitors from churches which believe communion should only be celebrated among Christians who are in full doctrinal agreement might not choose to participate. Their decision should be respected.

In many Christian churches baptized children and even infants are able to receive communion. Practice in the United Church of Christ varies, but increasingly children are welcomed to the Table at their parents' discretion following a period of instruction about the sacrament's meaning.

How often is Communion served?

In the early church Communion was served weekly, a practice continued and encouraged by the Protestant Reformers. Gradually the frequency of communion decreased in many Protestant churches. This trend is now being reversed. While no one pattern prevails in the United Church of Christ, many congregations are moving toward monthly or weekly communion.