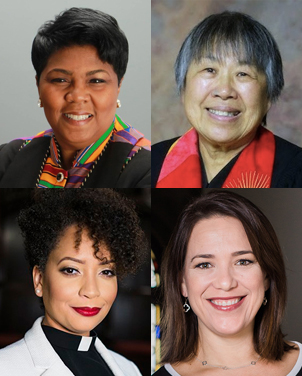 A lineup of creative and dynamic preachers and worship services will highlight the UCC’s biennial General Synod, June 21-25, 2019, at the Wisconsin Center in Milwaukee. As part of its theme, “Shine,” based on Matthew 5:16, General Synod will feature — for the first time in UCC history — all women in the roles of preachers, liturgists, and worship writers.

The women “have been chosen to preach on their merits alone, and I anticipate that some delegates and other Synod goers may notice this and find great joy in it,” said the Rev. John C. Dorhauer, UCC general minister and president. “Others may notice and ask themselves why it is so. My hope is that we will collectively own up to the fact that for centuries, the voices of men have dominated biblical and theological expression, and that we rejoice together as we experience the will of God working through the powerful voices of the women of the United Church of Christ.”

Spellman Douša will preach at the opening service, Friday afternoon, June 21. She is the first woman called to serve as senior pastor of Manhattan’s “The Park.” A graduate of the University of Pennsylvania and Yale University Divinity School, Spellman Douša is a celebrated keynote speaker and preacher whose often-fiery media appearances reflect her deep thinking, faithful perspective and quick wit. She is on the editorial board of the UCC’s Stillspeaking Writer’s Group and the alumni board of Yale Divinity School.

Over the years, “I have never missed a Synod, in large part because of the richness of the worship experiences and the phenomenal preachers invited,” said Spellman Douša. “I still have to pinch myself that I’ve been given this honor and that The Park church gets to share a bit of how we approach worship God intersectionally. In these days, the church needs to hear a word from God. I’m humbled to share this weighty responsibility with the incredible lineup of preachers the worship planners have assembled.”

The opening worship writers and liturgists are LaRvda. Jeanette Zaragoza-De León, The Park’s pastor for multilingual and cross-sectional worship; and the Rev. Stephanie Kendall, executive minister of Park Avenue Christian Church. The service will be bi-lingual, featuring simultaneous translation in a manner similar to The Park’s weekly services.

Blackmon will preach at the Sunday afternoon communion service, June 23. In addition to her duties with the UCC National Setting, she also is senior pastor of Christ The King UCC in Florissant, Mo., and calls both St. Louis, Mo., and Cleveland home. Blackmon is a featured voice with many regional, national, and international media outlets. Her communal leadership following the killing of Michael Brown Jr. in Ferguson, Mo., gained her both national and international recognition. She is co-author of the UCC’s white privilege curriculum.

The Sunday service — normally the largest as it is open to the general public — features writer and liturgist the Rev. Tracy Howe Wispelwey, the UCC’s minister of congregational and community engagement.

On June 24, the Monday night prayer service preacher will be the Rev. Sharon Lee MacArthur. MacArthur served on the UCC’s executive council from 2001 to 2007, and chaired the council from 2005 to 2007. She also has served in various posts for the UCC Northern California Conference. Currently, she is secretary of the regional chapter of the UCC’s Pacific Islander and Asian American Ministries (PAAM). MacArthur retired in 2014 after 13 years at Sycamore Congregational UCC in El Cerrito, Calif., only to come out of retirement nine month later to serve an interim ministry at Crossroads UCC in Honolulu, Hawaii. She was called to Berkeley Chinese Christian UCC in 2015.

”I am humbled and honored to be one of the General Synod preachers, in the company of such an incredible group of women whose writing, work, and ministry I have long admired,” MacArthur said. “I am blessed to be a part of a denomination that continually calls the church to live our our faith courageously.”

The writer liturgist of the meditative evening service is the Rev. Moira Finley, a UCC pastor in the Wisconsin Conference.

Closing worship June 25 — the 62nd anniversary of the United Church of Christ — will be the Rev. Amy Butler, seventh senior minister and first woman to serve in that role at The Riverside Church. Butler holds degrees from Baylor University, the International Baptist Theological Seminary, and Wesley Theological Seminary. She has served as director of a women’s homeless shelter, and as associate pastor of St. Charles Avenue Baptist Church, in New Orleans; and as senior minister of Calvary Baptist Church in Washington, D.C.’s Chinatown, where she also was the first woman to lead that historic congregation.

“Especially at these moments, it’s critical that people of faith gather to remember who we are and how the gospel compels us to live in the world,” says Butler. “Remembering our call to be light in this world will be a powerful experience at General Synod.”

The writer and liturgist of the inspiring, festive closing worship is the Rev. Ashley Goff, senior minister of Arlington (Va.) Presbyterian Church.

The Rev. Susan A. Blain, UCC minister for worship and gospel arts, is overseeing the creation of the General Synod worship experience. Conversations with the preachers and writers/liturgists have “articulated a common hope for ‘expansive’ experiences of worship, drawing on wide-ranging theologies, languages, and artistic expressions,” she said. “Together these women will engage the Synod congregations into prayerful spirals of lament and hope, challenge and commitment, meditation and movement — leading us into a space of healing, justice, and joy.”