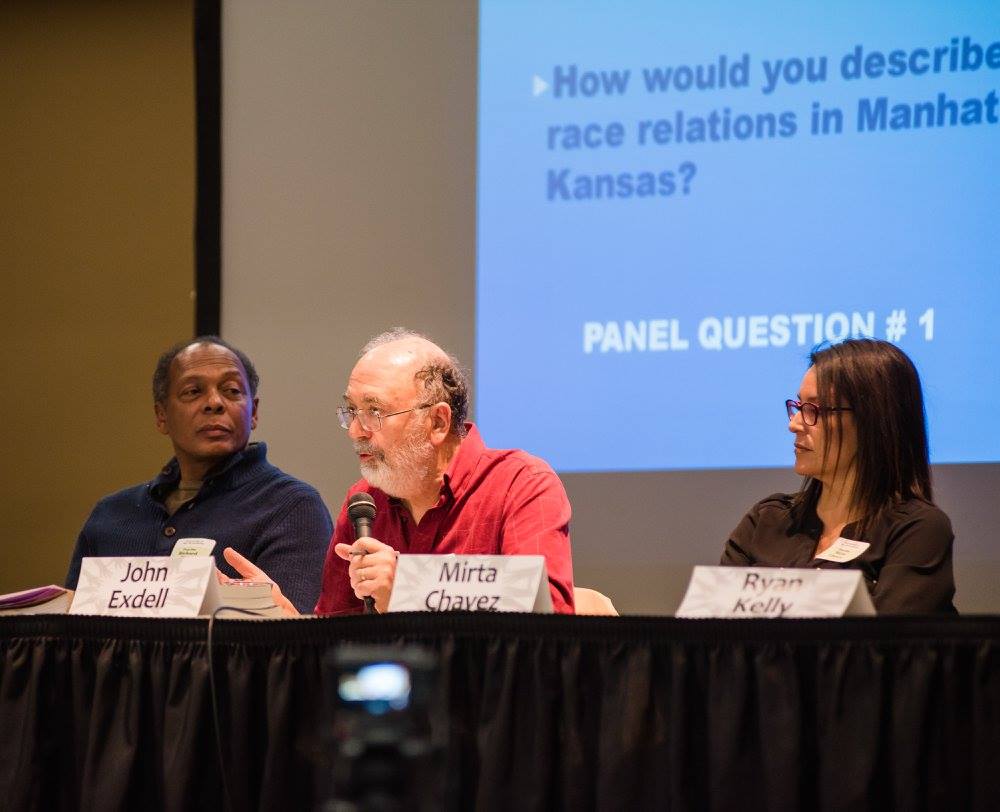 UCC churches in Kansas and in Oklahoma are living into a conference-wide commitment to a three-year justice initiative launched in 2015 by doing work around white privilege.

Enter the use of the United Church of Christ's White Privilege: Let's Talk curriculum, launched in September 2016. As Guffey said, "the initiative didn't gain a while lot of traction until we started working with the curriculum."

Once the Conference had a framework to move the initiative forward, the Rev. Nancy Eggen, a member of Fellowship Church in Tulsa, who has done a lot of work around racial justice, was tapped as the Conference Racial Justice Coordinator.

"It made sense to us to use the white privilege curriculum because our churches are predominately white," Eggen said. "Protection of white privilege is one of the drivers of systemic racism. This was a good way to start the conversation for people unfamiliar with the concept. We have folks who never heard the phrase white privilege before."

To assist the process, Eggen offered a one-hour workshop at the Kansas-Oklahoma Conference 2016 Annual Meeting.

"We did an introduction to White Privilege first as a 101 class, to give people background and shared vocabulary around racism, prejudice and the systems of oppression — to put everyone on the same page," Eggen said. The day after that, she ran a second workshop to provide an overview to the white privilege curriculum. Eggen and Guffey reached out to pastors around the conference to see if they would be interested in moving forward with this type of ministry.

"The thing we have discovered that it (the conversation about white privilege) is often difficult for people. For clergy it can be threatening, because it may provoke some conflict. We wanted to give our ministers as much preparation as we could," she continued. "Give people ideas on how to manage the group. Give them material so that they feel confident going it. It's difficult work. We were honest about it; we don't want people not to take it on. It's important work, but we recognize it is not easy." 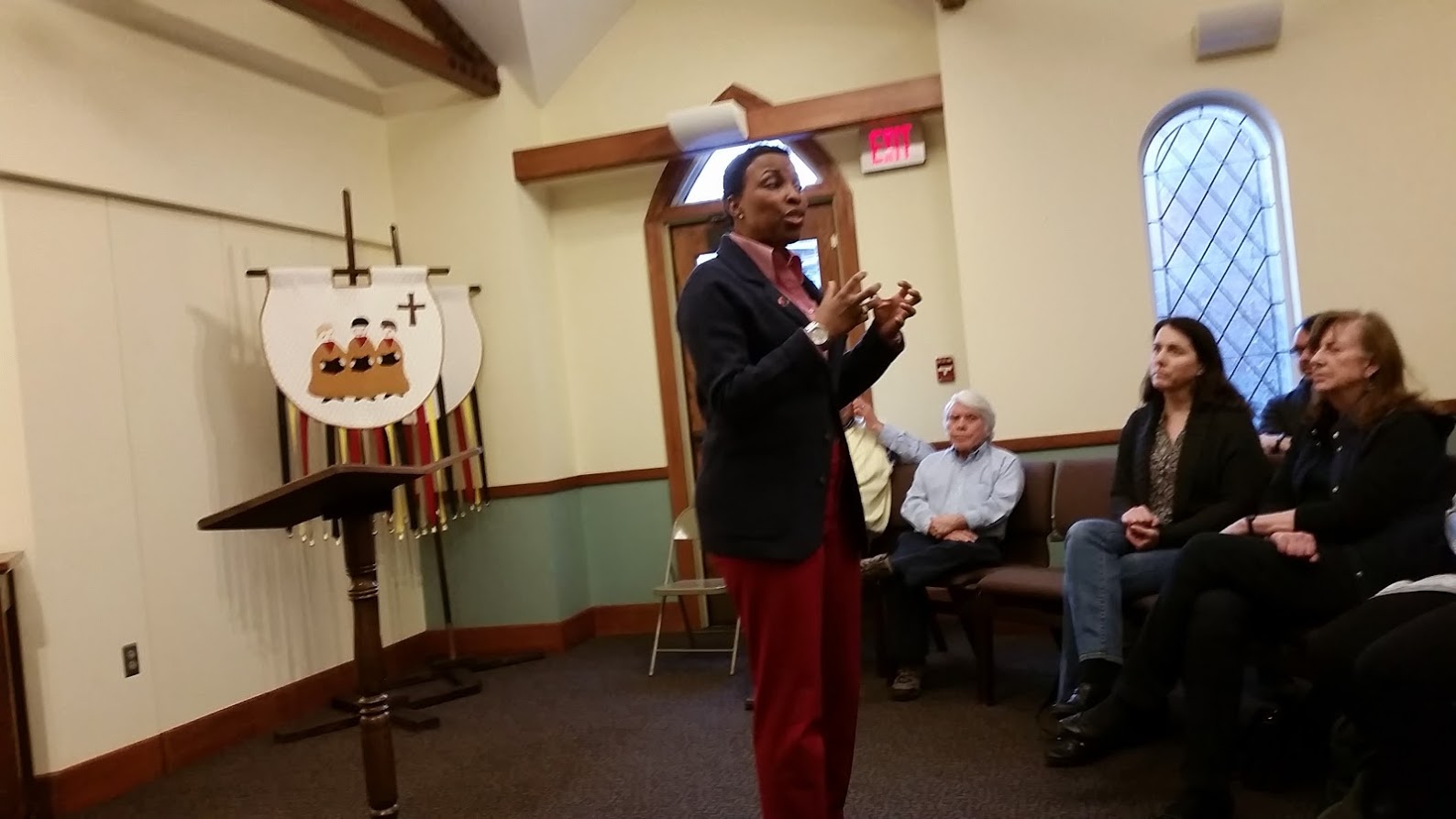 A few weeks later, Guffey brought one of the creators of the white privilege curriculum out from Connecticut to prepare people with the resource. The Rev. DaVita (Day) McCallister trained 20 facilitators from several different churches, and the congregations are working their way through it.

Plymouth Congregational Church, UCC, in Lawrence, Kan., is one of them.

"Plymouth has done the most amazing job at making the curriculum accessible," Eggen said. "I think they had more than 100 people in the first session and the church has done a good job documenting their process to share with others."

"Plymouth's Mission and Service Board decided it would mirror the commitment of the KO Conference," said the Rev. Eleanor McCormick, the church's associate pastor. "As the largest church in the conference, we wanted to make a deep investment in the White Privilege: Let's Talk curriculum." 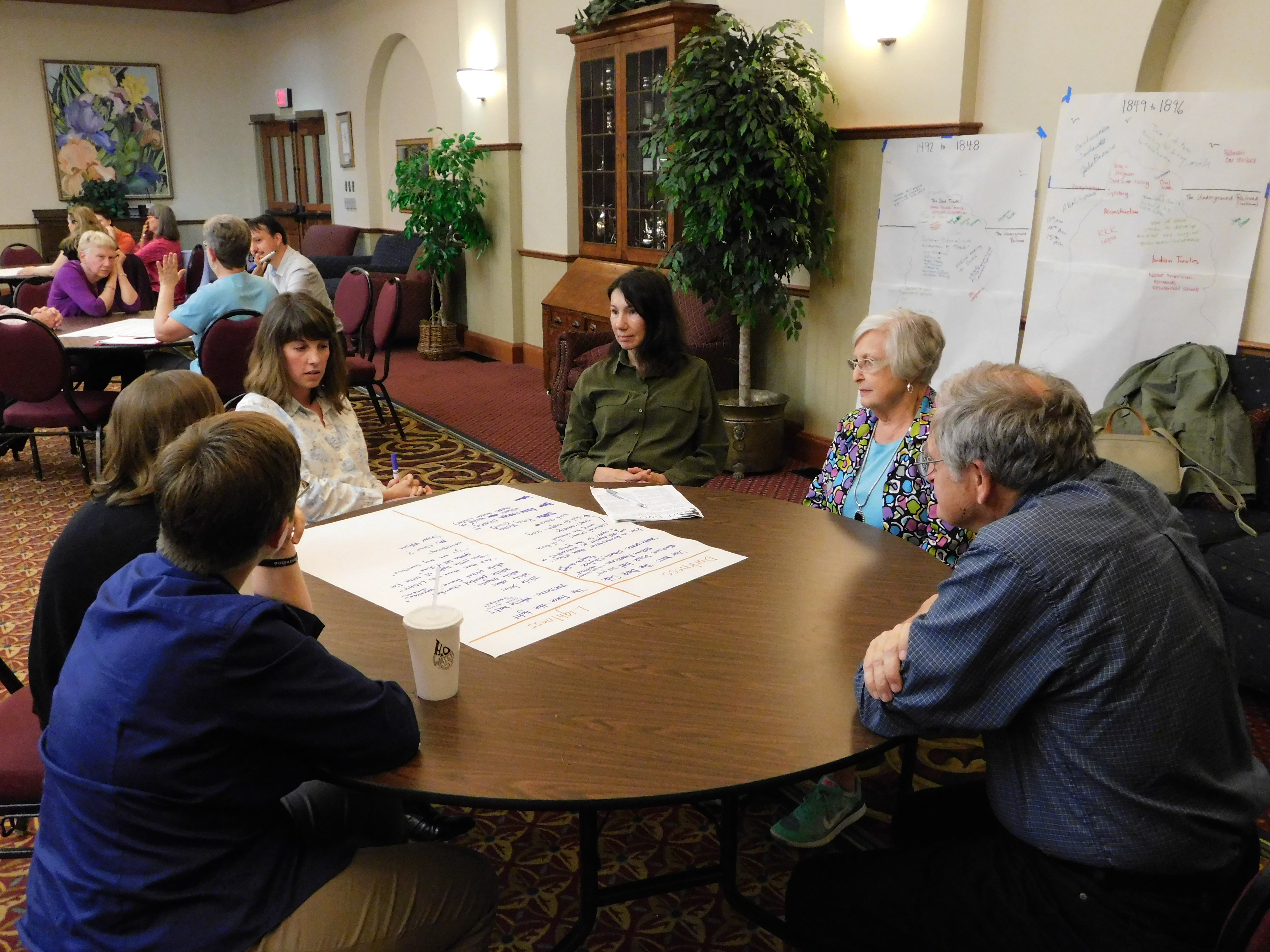 After a Plymouth team of lay leaders trained with Rev. McAllister in the fall of 2016, the ministry was born. The group taught two six-week sessions of the curriculum in 2017; Part One in the spring and Part One and Two last fall. The group is now beginning Part Three, and plans to invest additional time teaching Part One and Two in a weekend workshop in April.

"This team has shown incredible dedication to working through the curriculum — evaluating how to frame conversations, how to answer the tough questions, how to supply supplemental materials during and between classes," said McCormick." In my ministry I have never seen a group of lay people show as much dedication and commitment to any one endeavor before. And we found a team that has an invaluable and diverse set of skills and life-experiences to teach a curriculum like this — a graphic designer, a teacher, a therapist, a writer, a lawyer, a pastor."

McCormick said the curriculum, which she sees as an ongoing discussion about "how whiteness as norm has created social and cultural systems that celebrate, protect, and advantage white people while criticizing, wounding, and disadvantaging people of color," has already made a difference in how some of her congregants see their world.

"It's opening people's eyes to what is happening around us," she said, offering an example of a deportation case ICE is pressing against one of her neighbors, a professor from Bangladesh who has lived in this country from more than 30 years. "I know the conversations about white privilege have made an impact on the predominantly white congregation I serve, that they are able to see what is going on in our country in a new light."

First Congregational Church in Manhattan, Kan., is another church that has worked through Parts One and Two of the White Privilege:Let's Talk curriculum. The first section in an adult Sunday school class last January-February 2017, and the second as a day-long retreat in November. First Congregational also held two huge evening conversations on race in April and October, in partnership with a local African Methodist Episcopal church.

"These gatherings have happened as a part of a larger community-wide conversation on race that has been convened by members of our congregation and Bethel AME," said Rev. Caela Simmons Wood, First Congregational's senior pastor. "The two all-community events have drawn 200 plus people each time. They are calling them 'Conversations on Race and Reconciliation' and they have featured panel discussions with local leaders, small-group conversation, and time for fellowship. They have been very powerful events."

First Congregational began an intentional relationship with Bethel AME back in 2014, having communion together and inviting each other to social events. Simmons Wood said "we thought it would make great sense to see if friends from Bethel wanted to join us as we began working on the White Privilege curriculum. The gathered group included people from our congregation, Bethel, and the wider community." 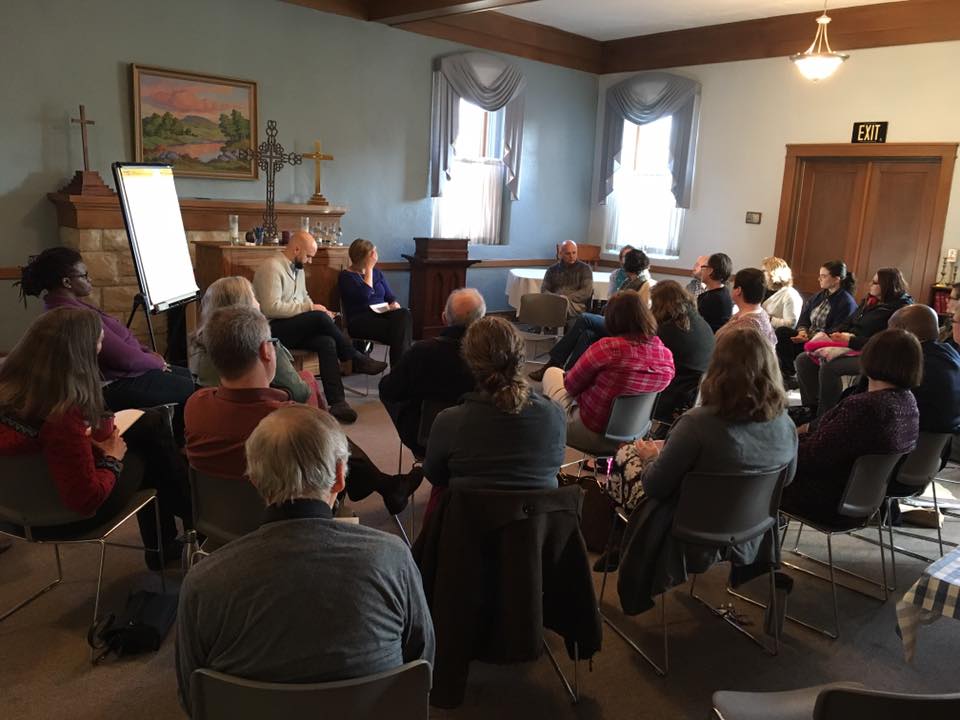 "It's been interesting that the work has spread beyond the UCC in Kansas-Oklahoma," Eggen said. "The Disciples of Christ heard that we were doing this work and approached Edith to ask about it. The result; I led required Boundary Trainings for all DOC Ministers in Kansas in 2017 on the topic of understanding White Privilege. On Feb. 26, the Rev. Chris Moore and I led a workshop on White Privilege for the Oklahoma Conference of Churches. We'd like to continue the work for as long as there is interest. Understanding privilege is just one step in addressing systemic racism, so I think of this as just one piece on the continuum of racial justice initiatives, and the work of racial justice certainly is far from completed in our little corner of the world."

In April, the Kansas-Oklahoma churches will be sharing what they've learned and experienced using the curriculum with the people of Coral Gables UCC in the Miami area.

"Our goal is to 'train the trainers' providing not only training but also materials that we have developed for our own classes to help lay leaders feel confident and supported in their teaching/facilitation," said McCormick. "It is an opportunity to be leaven in the loaf — helping other communities to have the meaningful and life-changing conversations we have had. Over this last semester, we have realized that the materials we have developed for adults need to be adapted for youth — and that may be an endeavor we undertake this summer."

"We are here to be a resource, if other churches would like more information," Eggen said. "Any help we can offer in terms of our experiences, best practices, resources, etc. we are happy to share."

Resources for the White Privilege:Let's Talk curriculum can be found here.